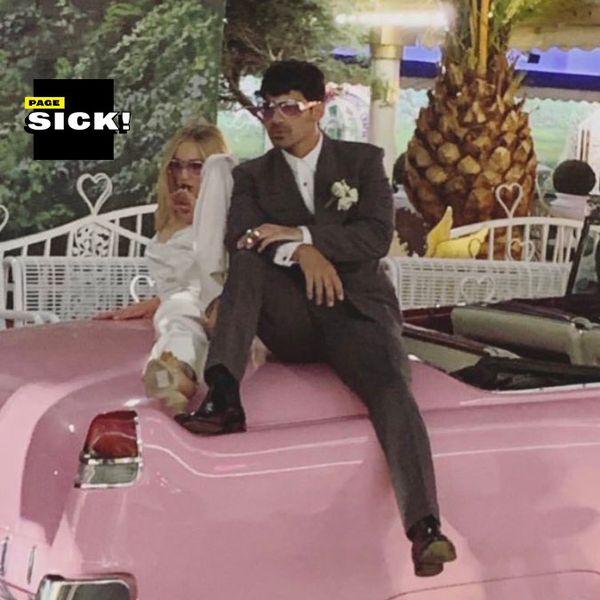 Page Sick: The Best Celebrity Gossip From This Week

Representatives have confirmed that Turner married the best Jonas Brother (fight me) in Vegas post-Billboard Music Awards earlier this week. (I'd like to shout out the unimpressed face she made during Taylor Swift and Brendon Urie's pastel pink performance. Sophie, I see you. You spoke for many of us).

Every detail about Sophie and Joe's wedding makes me respect them more. They exchanged ring pops instead of jewelry. They posed atop a Barbie pink convertible afterward wearing novelty sunglasses. They invited Diplo. Impromptu Vegas weddings are a Hollywood tradition at this point, but Sophie and Joe are a far cry from Britney and Jason or Kim and Damon. They get it. The whole thing seemed like a comment on fancy wedding culture in general, which is a little shady, because Joe's younger brother recently threw one of the most extravagant over-the-top ceremonies of all time. Never, ever forget PriyankaFest 2018. Kevin also went the traditional route when he married Danielle back in the day.

Best couple award goes to the happy newlyweds, for sure. It doesn't even seem like an annulment is on the cards!

Here's what else happened in Hollywood this week.

The 2019 Billboard Music Awards were surprisingly fun and eventful — kind of like what the Grammys should be, but never are. Mariah Carey received a trophy for existing, Paula Abdul nearly decapitated Julianne Hough with a bowler hat, Cardi B may or may not have flashed her vulva, #Mayochella started trending post-Taylor Swift performance, BTS were present, Madonna and Maluma gave "Medellín" its live debut, and Ariana did the "7 Rings" thing.

Here's the real headline, though: Kelly Clarkson, who hosted the ceremony, rushed herself to hospital afterward to get her appendix removed. It turns out she'd been in debilitating pain for the whole week prior, but refused to go into surgery until her duties were done. A showbiz professional. An anti-diva. Consider this: if left untreated long enough, appendicitis is can literally kill. Clarkson presumably just ate some CBD gummies and got through it. The show must go on! We bow down.

McDonald's hero Pete Davidson was slated to perform a comedy show in Bridgeport, Connecticut earlier this week, but walked out when the club's owner owner brought up the subject of Davidson's exes Ariana Grande and Kate Beckinsale. As explained on his Instagram story after the fact, Davidson felt "disrespected" by this: "[He] did something I told him not to do, and I can't perform under those circumstances." The comedian will reschedule a free show for ticket-holders.

Pete Davidson has spoken previously of how the fallout from his high profile celebrity relationships has taken a toll on his mental health, so it's understandable that he wants some subjects off limits on tour. Having said that... we've also heard that he frequently brings up Grande during comedy sets. Getting engaged then breaking up with the most famous popstar in the world is good material, after all! Davidson has talked about both Grande and Beckinsale on SNL, too. It is maaybe understandable that a venue owner would have felt comfortable referencing them.

Either way, we hope Pete is doing okay. His week probably improved after bumping into Hillary Clinton at 30 Rock — he's a megafan, and has the tattoo to prove it.

Travis Scott Celebrated His Birthday With an Experiential Branded Event

Kylie Jenner, much like the PR firms in my inbox, loves a pop up. When Stormi turned one, for example, Jenner created a temporary theme park that featured a giant balloon entrance shaped like her daughter's head. After commissioning an entire billboard in his honor, this week Jenner staged a similarly scaled party for her partner Travis Scott, who just turned 28. He also got a giant face-shaped balloon! Similar to the one on his Astroworld cover art.

Scott's Air Jordan-themed birthday was a million dollar event, if the couple's respective Instagram stories are anything to go by. Here's every wild detail we know.

Elsewhere in the Kardashianverse, Kourtney launched her first Poosh beauty products: two collagen powders, in collaboration with Vital Proteins. She's the latest sister to venture into e-commerce, following in the footsteps of Kylie, Kim, and Khloé. She told PAPER that the powders were developed with working women in mind.

This week also delivered many Kanye West headlines. Ye was papped wearing pointy elf shoes in a parking lot — the kind of footwear the Night King would wear on his day off. They'e probably Yeezy prototypes and therefore very cool and covetable, but 50 Cent wasn't having any of it. "Welp now I know I'm not a style icon," 50 wrote on Instagram. "I'm definitely not wearing that shit. LOL GET THE FUCK OUTTA HERE MAN."

We additionally learned that Jaden Smith will play a young Kanye West on a David Lynch-sounding TV show.

Prominent bald musician Moby revealed this week that he once rubbed his penis on Donald Trump, pre-presidency. Why do these strange celebrity Trump admissions keep happening? Rubbing your penis on someone does not make you part of the #resistance, Moby! It's creepy and weird! If it somehow makes it more forgivable, the musician says he was struggling to process 9/11 at the time. We all had our unique ways of grieving.

Justin Bieber, hip hop expert, had some things to say about Eminem this week. "I just like Em's flow but don't like that he's dissing new rappers" he wrote on his Instagram story, according to Consequence of Sound. "I like the new generation of rap he just doesn't understand it." Okay! That's no way to speak to about a fellow bleached blond hairstyle icon.

Justin Bieber has beefed with everyone from 15-year-old Jojo Siwa to Bill Clinton, so it's actually surprising that this hasn't happened previously.

Bonus round: Las Vegas gave Brendon Urie a key to the city. Lily Collins is being haunted by friendly ghosts. Billy McFarland is writing a Fyre Fest memoir. Paris and Kim are best friends again. We spoke to Twitter's leading Timothée Chalamet expert. Trixie Mattel is launching a beauty brand. Blake Lively is pregnant! Twilight is back. Fergie circa 2005 is a forgotten fashion icon.