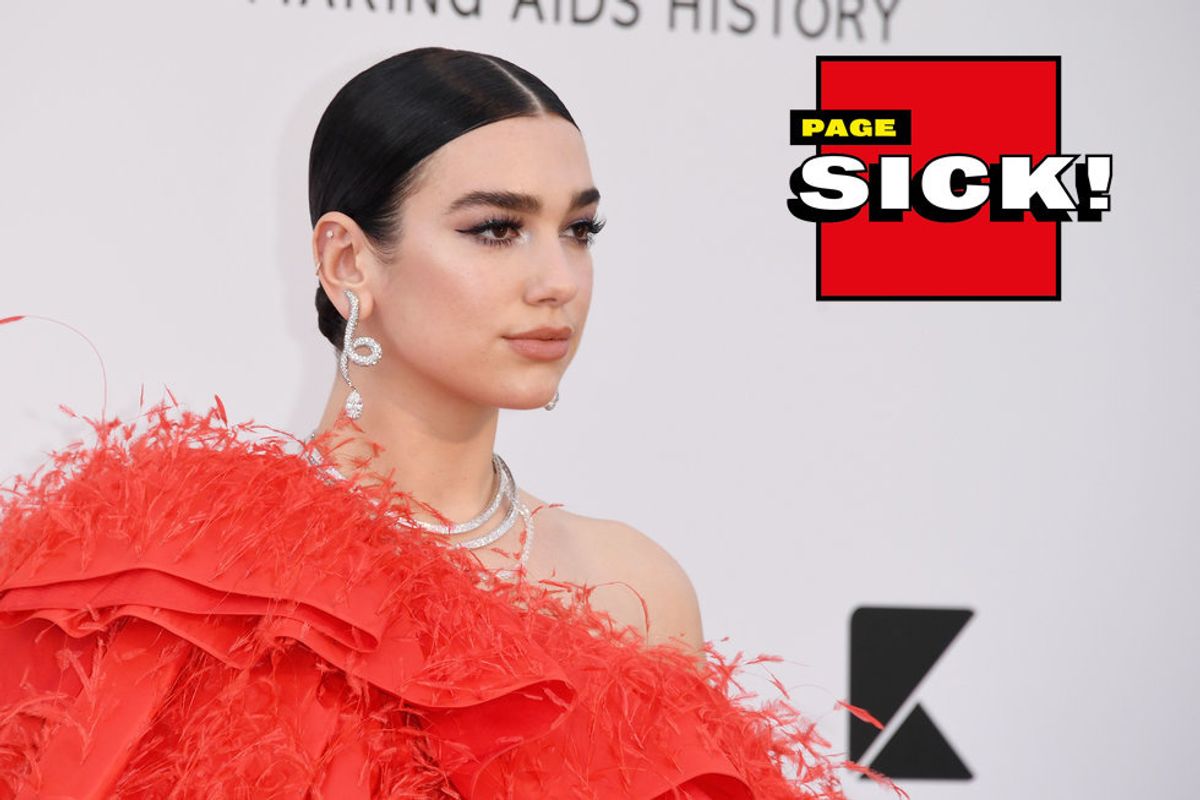 Page Sick: Did Dua Lipa Photoshop Her Own Baby Photos?

These days we take it for granted that everyone's Instagram photos are Facetuned and filtered. We just accept that everyone is lying for likes. We don't question it! So when fans started speculating this week that pop sensation Dua Lipa was photoshopping her own baby photos to look cuter, at first I was just like… sure. Great idea, honestly. Maybe I'll do the same. Everyone is fake and it's all, as Britney Spears keeps saying, a conspiracy. May as well lean into it.

Dua Lipa, for the record, denies the baby photoshopping allegations. She claims she was born with plump Juvederm lips that happen to adhere to 2019's very distinct, Instagram-dictated beauty standards. She could easily be telling the truth, but the alternative is way more interesting to think about, in that you realize how warped our brains have become. As a culture, we have reached a point where someone editing their own photos to look hotter is completely plausible. Admirable, even.

Dua, congrats on what must have been an easy childhood. Here's what else happened to famous people this week.

Irina Shook it Off

And let me tell you why. Carino and Gaga famously broke up just as the A Star Is Born press cycle came to a close and rumors of the singer's infidelity with Cooper came to a head. Gaga straight up denied said rumors, and Cooper appeared happy enough with Shayk — she was by his side throughout awards season. Even after that steamy Oscars duet, most reasonable people (read: not Little Monsters) assumed the fabled Gaga-Cooper on-set affair was just good movie publicity. Carino's "like" seems to indicate otherwise, right? It's a show of solidarity, as well as horniness.

If Bradley and Gaga end up getting together, at least we have the possibility of Shayk and Carino finding happiness, too. This could be a Shania Twain situation, people! Code Shania!

Iconic, unprecedented celebrity couple Joe Jonas and Sophie Turner continue to delight with their marital celebrations. After randomly getting hitched in Vegas, with Diplo as unwelcome wedding photographer, they're now planning more elegant nuptials in France. In the lead up, both hosted bachelor/ette parties with friends over the past week, and things got… somehow incredibly lit.

Turner's celebration kicked off — where else — at the recent Jonas Brothers London concert, and from there she and her ten-gal crew traveled via private jet to Benidorm, Spain, where Turner "rented out a luxurious penthouse suite at the hotel," according to E! News. Spain was chosen as a destination because "Sophie has always been a huge fan of Spain and she knew that it would be a fun place to party." They stopped off at Soho House Berlin on the way home to recover.

Jonas, meanwhile, hit up Ibiza. He and his pals (including Nick and Kevin) went so hard on the first night that someone called the cops on them no less than three times. For that to happen in Ibiza, one of Europe's preeminent party capitals? Shit must have gotten serious.

Jessica Biel Was Outed as Anti-Vaxx

Jessica Biel, an actress who is in no movies that immediately come to mind, went viral yesterday after Jezebel alleged her to be an anti-vaxxer. Biel was photographed with notorious anti-vaccination campaigner Robert F. Kennedy Jr, who once compared compulsory child vaccinations to the Holocaust.

Clearly stressed out by the torrent of negative publicity, Biel tried to distance herself from the anti-vaxxer movement while… somehow maintaining an essentially anti-vaccination stance. Biel says she is "not against" vaccinations, but she is against California's proposed SB276 bill, which will make it harder for parents to argue their children are medically exempt from vaccinations. Hmm.

This may sound persuasive in theory, but it's worth noting that the bill actually just standardizes the medical exemptions process, rather than eliminating it. It's designed to make the whole process safer and more legit. Biel reportedly hasn't vaccinated her kid. Justin Timberlake's stance on exposing children to deadly diseases remains unknown at this time.

Various YouTubers Were Not Okay

It was a big, weird week for YouTube drama. ASMR all star Makenna Kelly — aka Life With MaK — announced she'd quit the platform after the "unfair" removal of several of her videos from the platform. Literally Kelly is way too good for YouTube, a cesspool of alt right trolls and Paul brothers. We wish her the best for her new life, and will be following her on Instagram.

More evidence that YouTube is irredeemably corrupt: David Dobrik has reportedly filed for divorce from Lorraine Nash — the mother of his best friend and fellow YouTuber, Jason Nash — after one month of marriage. I just...

Even for Jenner, dressing up as a rape victim and posing for mirror selfies with your similarly attired friends is insanely tone deaf. Please tell me she at least used the event to fundraise for Planned Parenthood or something? @Kylie?

The Handmaid's Tale season three is currently streaming on Hulu, and PAPER recently interviewed lead costume designer Natalie Bronfman about how disturbing it is to see people make light of the show by wearing its blood red robes as novelty party costumes.

Bonus round: Badgalriri is just as stressed out and socially anxious as you are. Khloé Kardashian tells her TRUTH. Justin Bieber does not think before tweeting. Cardi B is done with liposuction, will get a gym membership instead.