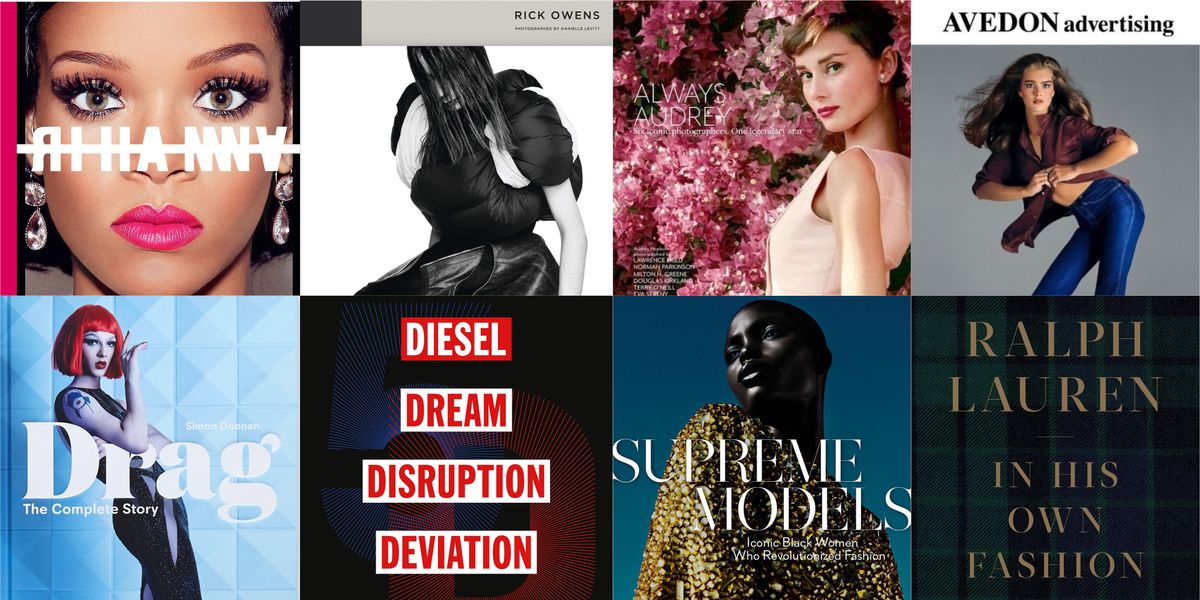 13 Coffee Table Books You Will Actually Want to Read

A slew of stellar creatives released this year's most noteworthy cultural books, from curator and critic Antwaun Sargent's illustrated essay on black fashion and art photographers to Simon Doonan's look at the history and legacy of drag. Other stylish tomes include those by brands who celebrated milestones and anniversaries this year (Ralph Lauren, Diesel, Prabal Gurung) to deep dives on famous faces like Audrey Hepburn, and iconic '60s model Jean Patchett. 2019 also saw the debut of none other than Rihanna's visual autobiography, which captured never-before-seen intimate photographs of her life. See below for the complete list.

The work of Off-White designer Virgil Abloh is documented in this stylish, special edition book that captures everything from street culture to high fashion. A three-books-in-one format tells his story: The museum section gives a complete overview of Abloh's work through interviews with key figures in art, fashion, design, and architecture. The archives section culls over 1700 images from his personal files, and an illustrated index section cross references the catalogue plates with his projects and process.

One of the fall's biggest launches, Rihanna's large-format book with over 500 pages documents everything her childhood in Barbados, worldwide tours, iconic fashion moments, and private times with her friends and family.

Related | Rihanna Knows You Don't Have Time to Read

A must-have book for any fashion lover, this volume chronicles Diesel's journey with denim spanning four decades. New photography is interspersed with archival visual imagery, campaigns, and editorials, offering a 360 degree lens at how the brand's use of denim evolved throughout the years.

The grunge-meets-glamour aesthetic of influential indie stalwart Rick Owens is captured sublimely in this photographic book that documents the designer's most impressive and provocative looks from the last decade. Principal photography by Danielle Levitt, known for her social-realist images, showcases the breadth of Owens' avant-garde, subversive work.

"Ralph Lauren: In His Own Fashion" (Abrams)

Ralph Lauren celebrated 50 years in business this year. In addition to a critically acclaimed HBO documentary, the iconic designer is the subject of an illustrated biography that chronicles his life through the lens of fashion and cultural impact.

While Jean Patchett may not be a household name, you're probably familiar with one of her most iconic photos: the January 1950 cover of American Vogue that highlighted close-up features, like her pouty lips and signature mole. She was one of the most in-demand models of the '50s, photographed by luminaries like Irving Penn and Cecil Beaton. This biographical essay, then, is a unique look at a model who defined a decade through rare images that explore her legacy.

The first-ever book celebrating the history and careers of black models features everyone from those who paved the way (Iman, Beverly Johnson) to 90's supermodels (Naomi Campbell, Tyra Banks) to the newest generation of models ruling the runway and shaking up the fashion industry by speaking out about racial prejudice (while becoming social media sensations in their own right) such as Adwoa Aboah and Joan Smalls.

Simon Doonan, the fashion icon most known for his creative work with Barneys New York, explores the journey of drag through the 20th century in thematic chapters such as glamour drag, art drag and black drag. Celebrating non-conforming gender fluidity, this book traces drag culture from ancient Egypt all the way to RuPaul.

One of the most important fashion photographers of his generation, Richard Avedon's career spans numerous high-profile campaigns, magazines covers and celebrity portraits. This is the first survey of his advertising work, which saw him shoot some of the most memorable ads for brands like Chanel, Calvin Klein, Dior, and Versace.

Audrey Hepburn fans, rejoice! Rare and unseen photos of Audrey Hepburn on and off stage are documented in this new book, which includes extensive commentary throughout from different moments of her life. A mix of on-set, fashion, portrait and behind-the-scenes photographs make up this stylish tome.

One of the most, if not the most, famous best-dressed lists in the world gets the book treatment with a look at the complete history of the International Best-Dressed List launched by Eleanor Lambert, "Godmother of Fashion," in 1940.

"Prabal Gurung: Style and Beauty with a Bite" (Abrams)

Fashion designer Prabal Gurung, known for his activism on and off the runway, celebrated 10 years in business this year. This first monograph on his career is packed with stories, design inspiration, and never-before-seen photos of his life and work from the past decade.

"The New Black Vanguard: Photography Between Art and Fashion" (Aperture)