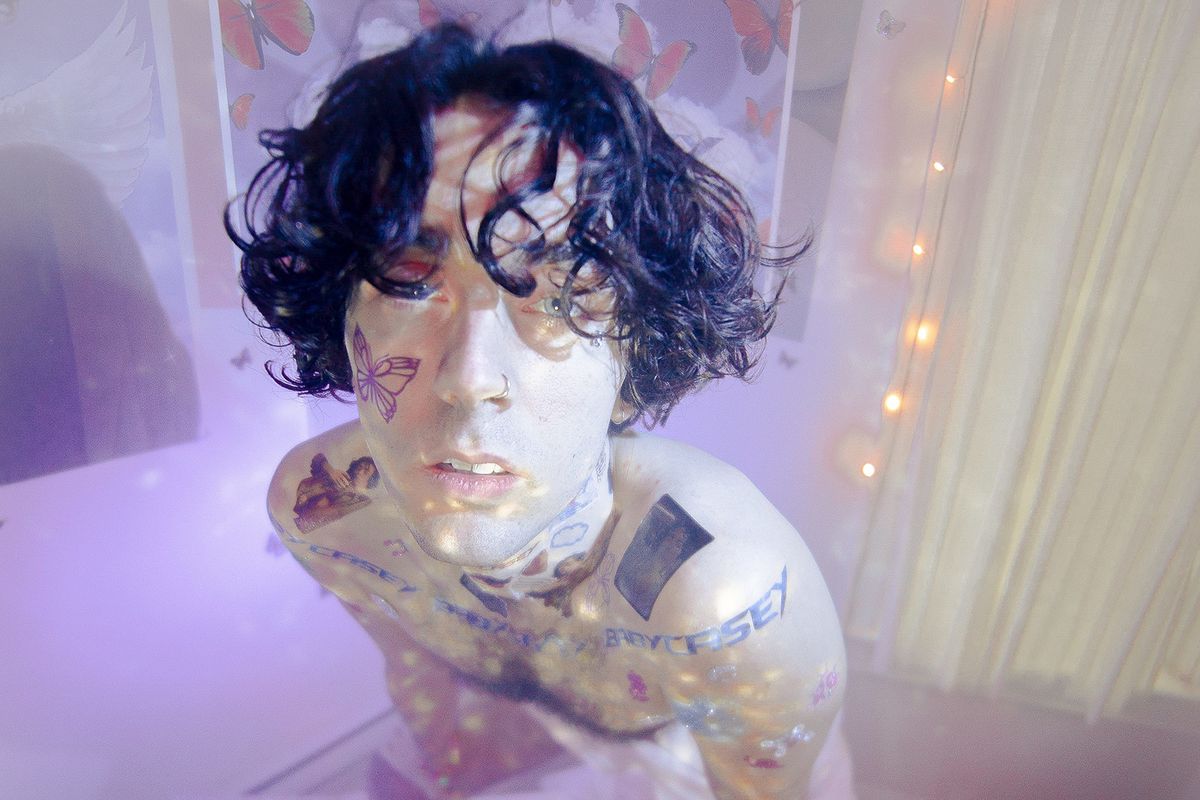 Casey MQ's debut album, babycasey, captures a very specific era of pre-internet celebrity obsession — a time when childhood bedroom walls were plastered with J-14 magazine cutouts of your biggest A-List crushes; when diary entries were scribbled with gushy love letters to famous people you'd only read about in print or see on big screens. Stars were then deified, well before platforms like Twitter or Instagram made them overly accessible and, in many ways, normal.

And boy bands, from the Backstreet Boys to Dream Street and NSYNC, were at the heart of this type of unrealistic, completely irrational, all-consuming fixation.

"Watching old tapes of myself over the past year, I realize much of my childhood world was a multi-faceted obsession with boy bands," says Casey, who grew up "seduced by their guise of desirability" as male band members subtly leaned into "homoerotic tendencies" through their music, visuals and live shows. "These images pervaded my childhood and plagued me with confused desire. I was enriched and enchanted by that world — I wanted every piece of it, I wanted to be a part of it."

So Casey explored his younger self for this album, creating music through the eyes and ears of "babycasey." Only now, the Toronto-based artist, producer and composer has a different perspective on the "narcissistic fantasies" he witnessed as a child who was taught that "praise from the outside world came coated with normative values." Reflecting on early aughts boy bands as an openly queer adult, Casey says he "can more critically recognize the entanglement of queerness with idolization of white-washed music and how I built a foundation for my white racial identity on these mirrored images."

babycasey then has all the sounds of wide-eyed childhood naivety, imbued with a modern queer, alt-pop finish. As a co-founder of the original LGBTQ Zoom rave Club Quarantine, Casey understands this balance better than most. Some songs are almost hyper-romantic with pitched-up vocals like a young "babycasey" hasn't been tainted by the restrictions of love in a real, adult world ("U + Me 4ever," "What About Us," "Candyboy"). Elsewhere, Casey revisits actual songs he started writing as a kid, like on "Charlene" and "Child's Stadium," bringing those innocent ideas into 2020.

One of the album's standouts, "Celebrity Crush," is a clear centerpiece and climax for all of Casey's explorations. "Write you in my diary," he sings on its verse in a squeaky, cartoonish voice. "Think about you in my dreams/ And there are hearts written 'round your name." Faintly in the background, Casey lists off first names of men, most recognizably "Justin," which could refer to Bieber or Timberlake in direct homage to the squealing fandemonium of his youth.

Naturally, PAPER asked Casey MQ to break down his entire babycasey tracklist and assign a "Celebrity Crush" to each song. From One Direction's Harry Styles to Kelly Clarkson and Prince, keep scrolling and stan the breakout musician's choices, below.

This one is basically the entirety of One Direction. That chorus is a stadium ANTHEM. In my mind, if Harry or Zayn were into pitched up vocals for an entire track they would sing this chorus in 2013.

I have a few options in my mind, but I'm gonna be honest and say Justin Bieber would be this song. For the fan fiction, we would definitely be top down driving through the countryside of Ontario. (I was also born in Ontario, so him and I share that.)

This is one of the more chaotic songs on the album and for that I'm gonna say Tyler, the Creator. I don't even know if he would like this song tbh, but I just think it matches his personality.

I'm not sure who my Candyboy Crush is... I think it would be someone a bit quieter and introverted, but a beautiful enigma. Maybe Sufjan Stevens. Let's go with Sufjan.

This song works in two parts. The first half is the retelling of a childhood fantasy that never happened and the latter is the song I wrote when I was 16 years old. Even though they are separate thoughts, they really wouldn't exist without the other. I say that because my celebrity crush for this track is informed by who I thought I should be and was becoming. This song is the entirety of S Club 7.

This song is Kelly Clarkson and Prince (both big inspos for this track).

This is a boy band track, for sure. Backstreet Boys — easy. This is the "Quit Playing Games (With My Heart)" music video.

It's fascinating as a child to be so entranced by idols and the seemingly magical quality they possess, and as you get older often rejecting what once had you completely entranced and provided a sense of safety. We look to these artists to see ourselves and for our imagination. If a child plays games that fulfills their projection or fantasy — like playing "House" or creating storylines for their toys — then the celebrity idols give into those projections and create fantastical beings that feel inhuman to us.

I'm gonna pick the three names that I list in the song: Leonardo DiCaprio, any Justin you can think of cause there are a few and Bradley. I'm not able to pinpoint a clear celebrity to Bradley, though — it's mostly because I thought of my new friend Brad Allen at the time and thought his name worked really well in the lyrics.

The First Song I Ever Wrote

12-year-old me wrote this song and this is the very short sped up version of it. The crush for this song would be some classic rock artist like Nirvana because I'm pretty sure that's what I was listening to at the time. You can CLEARLY hear the similarities.

This is also a memory of someone I knew, in that it's a memory I can think of retrospectively. There's a direct line in this song about us trading Pokémon cards before we got teased. I was really into Pokémon in third grade and often pretended I was Ash Ketchum. So maybe the song is Ash Ketchum — more of an idol figure.

This song was something entirely different about 6 years ago — a clear-cut pop ballad I wrote with my friend Ava. The revisiting of this song was the catalyst to explore all the disregarded pop songs I've grown up creating. This one feels like every crush I've had being set free so I could carry more confidence — an offering to yourself.

I wrote a long post on my instagram once about the effect Channel Orange and everything surrounding that album had on me. That album and Frank Ocean in general felt like an offering and solace when I was truly frightened of being myself. Big celebrity crush. This song is the many nights of being afraid of various things as you grow up. Of the thousands of nights, one of them was spent with Channel Orange and that unexpected release.

This is another song I wrote as a child in a studio at 12 years old and I happened to have the stems for it, which is hilarious. So I decided to reimagine it, but also leave the vocals completely unadulterated so you hear how I was singing before puberty. This song is definitely Evanescence or Gerard Way. I was obsessed.