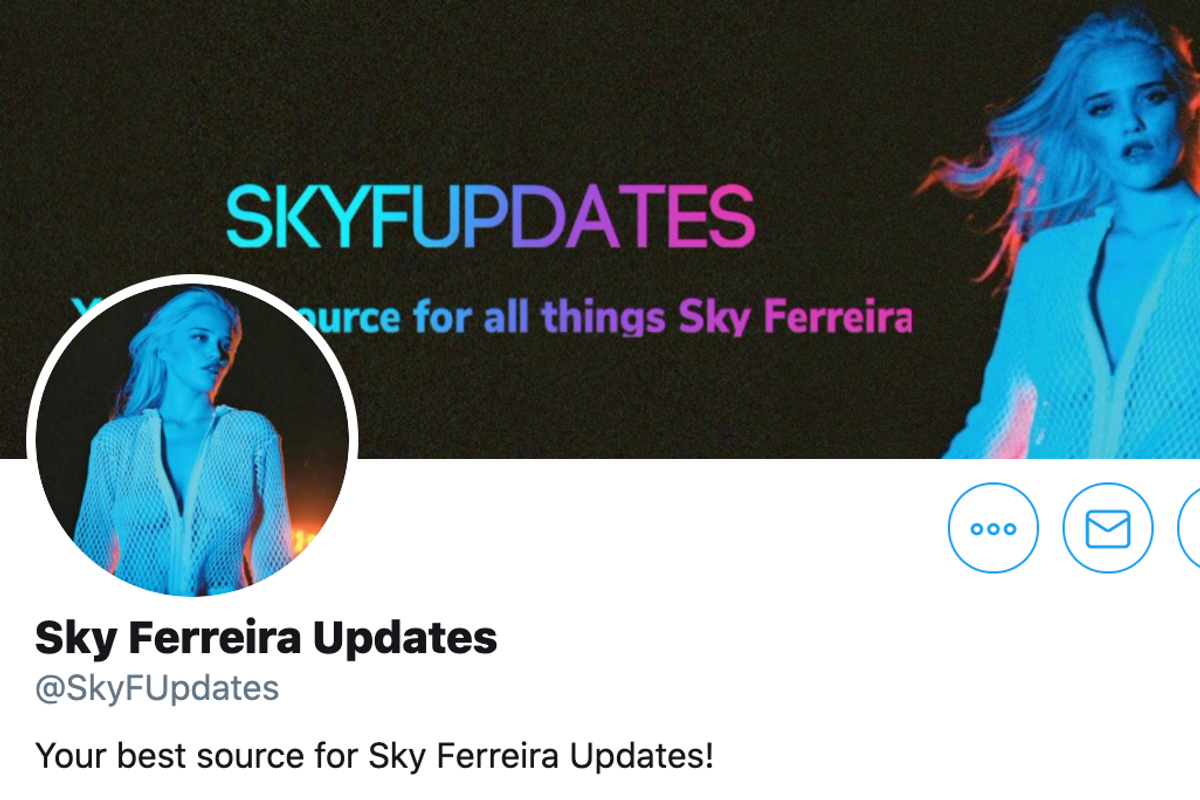 When an artist decides to step away from the limelight, what happens to their stans? That's the strangely existential conundrum faced by SkyFUpdates, a Twitter account dedicated to aggregating the elusive LA it-girl's recent activity. Over the past few years, the 21-year-old Londoner who runs the account has dutifully posted about every minor appearance Ferreira has made on other people's records, every film and TV cameo she's clocked and every promise she's made regarding the whereabouts of her long-awaited sophomore record Masochism. Much of the account's content comprises older material from the Night Time, My Time rollout in 2013 because, with the exception of last year's single "Downhill Lullaby," the latter half of the last decade was a relatively fallow period for Ferreira.

There's only so long, though, that one can provide updates on a star with no new output. Recently the account has taken on a surreal bent, posting withering, tongue-in-cheek memes about the status of the seven-years-in-the-making Masochism. Last week, years of relative inactivity from Ferreira came to a head, with SkyFUpdates' owner posting a short, sobering Notes app screenshot announcing their retirement from stan Twitter. "[When] I set up this account at 17 years old, never did I think at 21 years old I'd still have no Sky Ferreira album to update," the note begins. "It's getting harder and harder to continue with this account. With the memes and jokes aside, there hasn't been any content to update for months now."

The note, in its entirety, is some kind of breathtaking, exposing a lot of the implicit pressure points of stan culture — its reliance on a high level of access verging on invasion, the pressure it puts on artists to constantly create and the toxicity of stan communities among them. For anyone who has been a fan of Ferreira since the early days, the tenor of the note — a kind of resigned sadness — feels familiar.

Over Twitter DM, SkyFUpdates — who wishes to be only referred to as J, due to privacy concerns — stressed that it was a combination of online toxicity and growing fatigue with the grind of stan culture, as opposed to any action of Ferreira's, that led them to put the account on hiatus. "The fatigue has been a gradual thing," J tells me. "I've always had hope at the back of my mind that something was around the corner."

While J has run SkyFUpdates for four years, they've been a fan of Ferreira since the release of Night Time, My Time. Meaning around a third of their life has been dedicated, in some way, to Ferreira fandom — enough time to have developed a shrewd understanding of the social subtext of stan culture. "Labels care less about fans these days, as the industry is less about loyalty and more about fast, easy consumption," they tell me. "Which [is why] stan Twitter fights over which fave has better album sales or a better Metacritic score." In other words, J sees stan Twitter as a mechanism to legitimise stars in a system that sees them as disposable.

J stresses that they still love Sky, but that their patience is simply wearing thin with stan Twitter, as well as the constant broken promises of Masochism's release.Although they were "gagging for it" around 2016, the past few years have been tough: "I feel numb these days."

What attracted you to Sky in the first place?

Sky is obviously one of my favorite, if not the favorite, artists of all time. That's not to say she's better than any given artist, but the time when I discovered her combined with the climate of my life was perfect. 2013 felt like a huge benchmark for alternative pop music. Lorde came out with "Royals;" Lana Del Rey released a hugely successful debut. This [provided] an opportunity for newer artists to gain momentum such as Sky, Charli XCX and FKA Twigs. This time was especially exciting for me as I was discovering more about myself early into my teenage years, being 14 at the time, and having more control over the music I listened to myself without the influence of others (e.g. family, radio).

During this time, Sky was tumblr's it-girl, and was practically everywhere on social media. Critics were raving about her, interest started growing and things seemed on the horizon for Sky, which of course made her easier to stan at the time. She released a critically acclaimed masterpiece of an album which had a grungy post punk sound to it which resonated with many of us angsty teenagers. She really captured the "Nobody gives a fuck about me" attitude that so many of us could relate to at the time. I still think that album is so precious, and nobody has come close to making anything similar, it's timeless and makes me feel so nostalgic. Sky struck gold.

That helped form newer relationships online with those I shared the same musical tastes with, which was rare to find in places such as school. The online connections were different in many ways — less organic and more instant — which had its pros and cons.

Sky's nature almost seems like it wouldn't interact well with stan culture – she's so private and doesn't run in pop circles. Do you consider that when posting and running the account?

I think Sky's nature is the sole reason why this account has been such a success. I sort of act in lieu of Sky when she isn't as active as she used to be, pushing out content in a more accessible fashion in comparison to how she does it. That's why people resonate with this account so much.

I think Sky is very similar to artists [like] Fiona Apple in that respect. They just want to release and let the music do the talking. They aren't interested in the social aspect, the promo and release cycle as much. I totally get why Sky uses social media less and less, some of the comments she gets can be quite nasty.

What's it like stanning someone who's so absent from public discourse? It's very different to stanning, say Charli XCX, who is a lot more public and a lot more active online.

Sky hasn't always been so absent. I think it's due to many reasons, which I can only guess. Things such as pressure from fans, sick trolls and generally just growing up.

It's sort of hit and miss for me. It can be dull and boring for the most part but when we do actually get content it's so much more rewarding than, say, Charli XCX content, which is pumped out more regularly. It's hard, [because] I'm so invested in her and her career. But, that said, it adds an element of suspense to her persona. She really does know how to build anticipation and then snatch it from you — a true masochistic experience.

How did you feel when "Downhill Lullaby" was released?

When "Downhill Lullaby" was released, the responses were very mixed. Some people loved the song, some people [felt] very underwhelmed. Sky always knew that was going to happen and teased pop songs to come (like the eagerly anticipated "Don't Forget" and the song she debuted at Pitchfork Festival, "Descending"). The treatment after the release is what I think made people worse. There was no follow up, no music video or promo roll out and people began to anticipate less and less.

Considering how long you've stanned Sky, how does it feel to see the album be promised and then postponed again?

I feel numb these days. Back in 2016 when Masochism was supposed to be released in the summer, I was absolutely gagging for it. But fast forward to now, the anticipation is wearing thin. I feel like a lot of Sky listeners can relate. We're growing older now, so we'll take whatever we are given, when we are given it. I will say, however, she has a very loyal fanbase that will eat up anything she releases when she's ready. It's very rare to see, most artists and music have become incredibly disposable within the past decade. Sky is doing something right as she releases those golden classics.

In your goodbye note you wrote that you were beginning to grow past the "stan Twitter fiasco." What do you mean by that?

As I've turned 21 years old and have been on Twitter for 10 years now, it's really becoming dry. For me, I feel like I need to move on and experience life a lot more on the outside world rather than the virtual world. I'm not quite sure how I'm going to do it. Maybe I shouldn't feel so bad for enjoying time online, who knows? I think it's about finding balance. It irks me that I spend a big chunk of my day looking at a screen whilst the world fast forwards in front of me. I've always known this but as I'm getting older and seeing others get older… it's impacting me a lot more.

Stan Twitter has exposed me to so much — a variety of artists, an array of viewpoints, and many different people. It's helped me understand how social media works which will hopefully help me in my career in marketing in the future. Ultimately, it's been a fun escape.

However, it can be very consuming. Lot's of vulgarity, trolls and so on. But that sort of stuff makes you more resilient I guess. I also see people producing content just for the sake of validation, and it's quite sad since in reality, none of these people know or care about you.