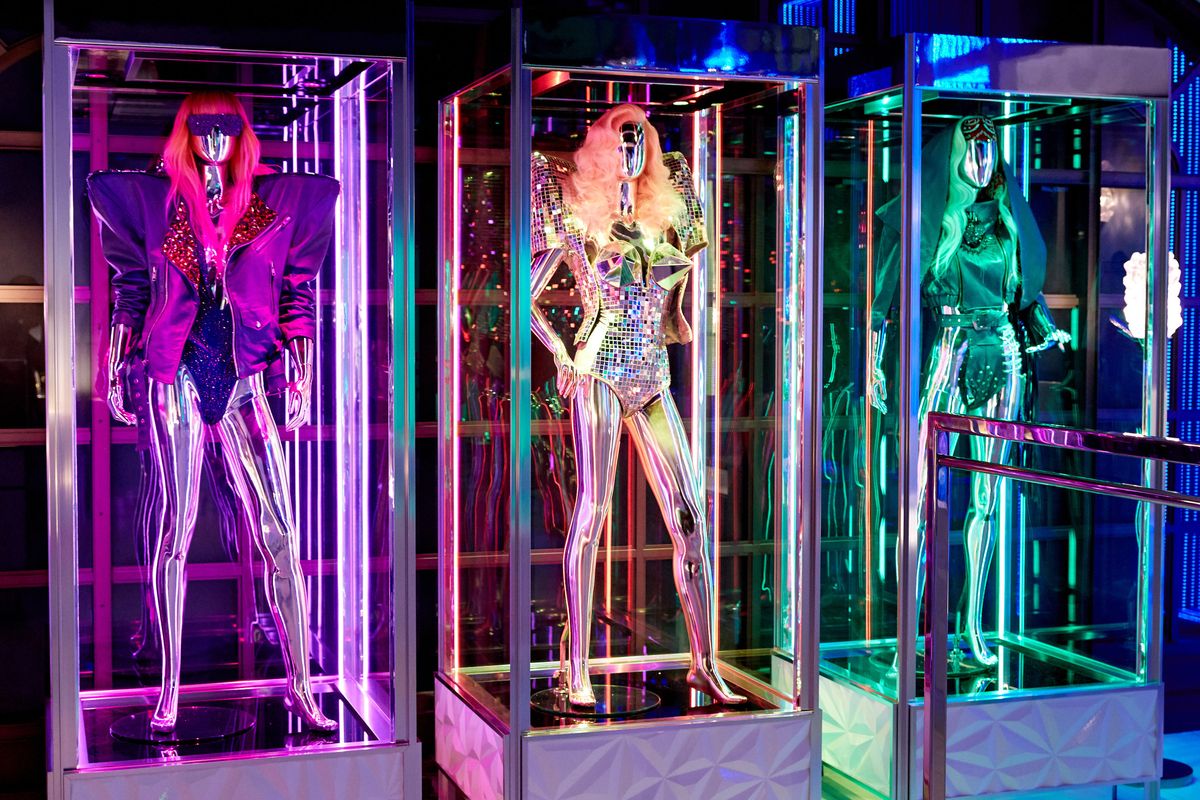 Lady Gaga's looks have become as famous as her hits. Absurdly polarizing and at times strategically sensational, the pop star reignited the demand for celebrities to take high fashion seriously by showing how style could be a tool to pierce cultural norms and disrupt the everyday. Unlike lyrics or sounds, outfits can be photographed and then multiplied by millions across the world for mass consumption — a means to elevate and spread her message on a global scale, as Little Monsters began obsessing, replicating and needing more.

Throughout Gaga's 10-year career, her music can be organized into visual eras — each distinctive and reflective of her psyche like an inkblot.

Related | 'G.U.Y.' Turns Five: When Gaga Rose From the Ashes

To coincide with her Las Vegas residency at the Park MGM, Gaga's most iconic outfits have been pulled from her personal archive and organized into a museum in the same hotel. The Haus of Gaga exhibition, which runs through November 8, 2019, was co-curated by longtime stylist and collaborator Nicola Formichetti, allowing fans to see around 40 pieces of clothing and accessories up close. It's a stan's paradise, featuring Gaga's most well-known looks (the meat dress, the "Telephone" hat, the Super Bowl bodysuit), as well as deep cuts (the "Born This Way" flesh boots, the "Marry the Night" platform ballet slippers, the turquoise CFDA Awards wig).

The Haus of Gaga exhibition at large feels like a gift to Lady Gaga's fans, and Nicola Formichetti says he even consulted Little Monsters every step of the way to ensure his team got everything right. Before the museum opened to the public, PAPER got an exclusive preview and reflected with Formichetti on a decade of game-changing style.

PAPER: Lady Gaga's 2009 VMAs performance of "Paparazzi" is what really shifted her career. It's the moment the world realized she wasn't your average pop star.

Nicola Formichetti: We felt that, too. Being with her around that time — that's the first year we started working together, and it was incredible to see her on stage next to the other [famous] artists. That performance was unbelievable. I remember we were trying to figure out the blood coming out because we were all perfectionists, so we wanted the blood to come out at the perfect time, and we were backstage praying. [Laughs] But everything was perfect.

What were the conversations you had with her around the concept? Because bleeding and dying on stage is pretty extreme.

[Laughs] It was the idea of the fame that killed her, so it was quite theatrical. There were so many things going on: the choreography was incredible, her playing the piano really in the zone. We worked on the performance for a long time. We research a lot, and study a lot. There are spontaneous aspects to it, but we plan everything to be a perfect performance. The only thing we didn't want is the mechanical problems. That is the only thing we were praying for.

Famous pop stars at that time weren't taking fashion seriously. "Bad Romance," for example, premiered on the Alexander McQueen runway, which was livestreamed on SHOWStudio. That's what made your relationship with Gaga so special.

I come from the fashion world, so for me, when we started working together it was so normal to cover her in fashion. Because that was such a perfect thing, but that time there weren't people doing that. So I think it was such a special moment in the beginning, with [Alexander] McQueen and Nick Knight. She totally embraced that fashion culture, and she, in a way, made fashion alive. She kind of bridged pop culture and fashion and music. She opened the door for other artists to do that today, because today you have to work with fashion. It's all together. It has to be 360 [degrees]. But at that time, it wasn't like that. We started that.

"[Lady Gaga] opened the door for other artists, because today you have to work with fashion. It's all together. It has to be 360 [degrees]. But at that time, it wasn't like that. We started that."

When you worked with Gaga, did you design the looks to become iconic? They've all had such an incredible cultural impact.

No, she made it iconic. She performs in it; she becomes that [character] to make it better and take it to another level. She's very much a part of the creative process, and, of course, she's using her body and her face and her image. But she's very behind the scenes, as well — making things and cutting things, putting safety pins on, trying to make it better and new... And then we make it iconic [Laughs].

The Born This Way era was packed with so many different ideas, like in the 14-minute "Marry the Night" video. What was your approach?

We were looking at it as more of a fashion story in a magazine. Every shot is a different outfit. We really went into the extreme of it. That time was very important — the fashion and the photographers and film directors, from Nick Knight to Steven Klein and Inez & Vinoodh. We really worked with them to elevate the whole thing. It was like an orgasm.

Looking back on everything you created together, what was the hardest look to pull off?

Well, there's a red carpet — a red carpet, you get one chance, so it has to be perfect. It has to be 360 [degrees]. If you're outside with the hair, there's movement. The meat dress was exciting because I came in with a little fridge and Franc [Fernandez] made the dress, and it was inside the little freezer. Gaga's mom was like, "What's she wearing today?" And I was like, "It's in the fridge" [Laughs]. There was a message: We're all the same, we're all made of meat. This was an evolution of another outfit we did for Vogue Hommes Japan: The meat bikini, and then we wanted to do something a bit more red carpet-y with the same idea [Laughs].

LADY GAGA ENIGMA on Instagram: “Welcome to #HausOfGagaLV at @parkmgm. Haus Of Gaga / Las Vegas is an evolving space that will transport visitors through the history and…”

The Monster Ball costumes specifically are so worn in. You can tell she really wore them to the near death. How did you make sure these looks withstood the drama?

I know, we try to make it as comfortable as possible. But she cares about her fans so much, that if it looks good in the end, she's going to still wear it regardless. That's why we love her, because she commits. So our job is to try and make the most impactful [look], but also make it comfortable for her to perform in. But sometimes you can't get the effect [with comfort], so she'll be like, "Okay let's go!" But when she has to perform in that every night, sometimes it's very hard. Still, she commits and I love that.

Did these looks all come from an archive?

Yes, it's a very secured, temperature-managed, numbered archive in California.

Is there a full-time staff?

Of course, because we respect fashion so much. Also her props and all her gifts from her fans. It's all kept in a really beautiful space.

Is Gaga as intense working with you behind the scenes as she is performing on stage?

Yeah, she's very much the same Gaga front and back. Also, I love the fact that she really respects artists and other designers. She's one of the first people to encourage me to do my own stuff. She's one of the reasons why I took [on being creative director at] Mugler. It's super fun when we work together. When I stopped working for her for a while, Brandon Maxwell took over and now Brandon is doing his own design job, and there are so many people coming out from Brandon's camp. We're all friends and still talk to each other, and I think it's super cool.

What brought you and Gaga back together?

I loved doing my own thing, I still do. I was kind of missing the performance aspect of it. We always kept in contact, but I think [Enigma], the Vegas show, was a good moment for me to start collaborating again, and now it's full on [Laughs].

"There are so many memories [in this museum]. It's her life, it's our lives. It's almost like perfume — you remember that moment with a smell."

As co-curator, how did you choose what made it into the Haus of Gaga Museum?

This place is ever-evolving. We want to switch things up, we want to keep changing. One of the most fun things we did was actually collaborate with her Little Monsters. That was very special for me. We contacted all the super fans, her Little Monsters, to initially get the vibe of what kinds of stuff they wanted to see. Which looks were their favorite, and also fact checking [Laughs]. They're so anal about the dates — Oh no, she wasn't wearing that shoe on that day — so we were checking facts with her Little Monsters. This space is for her fans, so I wanted to collaborate with her fans to give it back to them.

Looking at this museum today, with years of your work on display, how do you feel?

It's very emotional for us. There are so many memories. It's her life, it's our lives. It's almost like perfume — you remember that moment with a smell, it's very much like that. You look at it visually and you're like, Wow, I remember what I was doing at that time. For Gaga, it's difficult to choose favorite outfits because she always likes to move forward. She'd probably say the t-shirt that she's wearing [today] would be her favorite look right now.

[Laughs] We love what's next. It's interesting to look back, because we never look back. What we do normally is we'd probably style [these looks] differently and make something completely different out of the old stuff, right? But we didn't want to do that for this experience because we want people to feel that time. But we tweaked the space and made it more current, so it feels much more modern and also in-conjunction with the Enigma show. It feels quite digital. I think it's a very beautiful merge of the past and the future.

A museum is quite symbolic.

I know, when you start doing a museum it's almost like an end of the career. But [Gaga's] about to start. Of course, she's done 10 years, but we have so much crazy amazing stuff coming up this year and next year. It feels weird, but it's sort of like a nice 10-year stamp to say, Look what we did and thank you, in a way to her fans. But this is just the beginning, I feel. The movie [A Star Is Born] changed things completely. She just keeps surprising people.

Do you feel the pressure to continually top yourselves?

We don't feel that, actually. We always believe in our gut and we're pretty aware of what's around — what's cool and modern and new. I think we're okay. We have some stuff up our sleeves [Laughs].