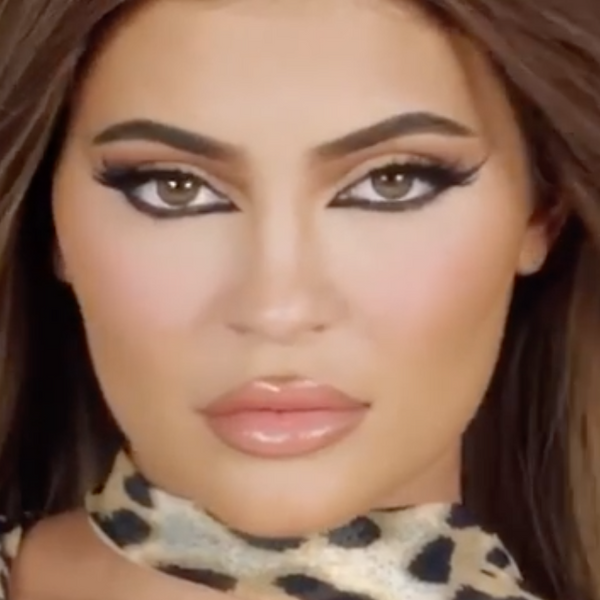 I was minding my business on Twitter when I gasped mid-hummus dip. My timeline had flooded with Kylie Jenner's new campaign for her latest Kylie Cosmetics drop. "Haifa Wehbe?" I wondered. "Is that you?"

What was supposed to be a fierce, feline-inspired photo shoot ended up becoming the biggest meme on Arab Twitter. Presumably by accident, Jenner's styling resembled the cliche early 1990s and 2000s Middle Eastern pop star glam look. If you're unfamiliar with which campaign photoshoot that I'm referring to, and you're Arab, once you take a look at the imagery — it speaks for itself.

I couldn't believe the same influencer who once rocked short green hair with an edgy attitude could possibly embody the '90s Arab pop star look that's also seen on the walls of Arab beauty salons and on the back of Middle Eastern beauty product packaging.

Many took it upon themselves to turn her photos into mixtape covers similar to those like superstars Nancy Ajram, Sherine and Haifa Wehbe.

Twitter user @jonaybish edited Sherine songs over the campaign video, and it was literally a match made in heaven. The close up on the heavy coated smokey eye and thick liner is a Middle Eastern staple when it comes to music videos. Other Twitter users turned the campaign imagery into the typical advertisement you'd see walking along the bazaar and souq.

The memes even began resurfacing across the Muslim and Arab TikTok community.

"It's actually refreshing to see a change in perception on our Arab aesthetic," says Palestinian TikTok star Lara Radwan, who runs a large community page for Muslims called Kinda Halal.

Like many others, Radwan shared her appreciation for what Kylie Jenner's campaign had brought to mainstream media. "Trends that were once seen as 'barbaric' by the West, are suddenly now appreciated by celebrities. While many of our TikToks and spike in memes on Kylie's shoot comes from an ironic-scoff reaction, many of us are happy to see celebrities like the Kardashians keeping up with trends that we set."

The latest trends of plump lips, leopard print, robust waists, heavy eyeliner and smokey eyes were groundbreaking in the West, but what people failed to understand was that Arab women rocked this look first.

Most commonly, a lot of Arab Twitter users saw a stark resemblance between Kylie Jenner and Lebanese pop star Haifa Wehbe. Haifa's iconic hit-song "Aana Haifa" (translated to "I Am Haifa") shook Arabs across the Middle East in 2005 as she made a song... all about her beauty. Everything about Haifa's mismatched leopard dress and heavy eyeliner in the music video set the tone for embodying the way typical Middle Eastern women look. She emphasized everything about herself that was beautiful and continued to always refer to her eyes "el helween."

Haifa became a hit and stirred a lot of conversation – some say her impact is similar to Kim Kardashian's rise to fame in the United States for breaking a lot of cultural barriers. Kylie's latest campaign shoot resembles a lot of Haifa's signature iconography – which made Twitter users mention the similarities between the two.

Although these memes are light-heartened and meant to make fun of the clash between Western trends and Arab culture, the conversation of whether or not Kylie Jenner is appropriating Middle Eastern looks resurfaced following the meme invasion on Arab Twitter.

While Kim Kardashian is ethnically Armenian, Jenner is white. Cultural appropriation accusations have followed both women for years. Just recently Jenner was accused of captioning her Instagram photo with "brown skinned girl," which she says was doctored. While unlikely, her blackfishing past had made the photoshop somewhat believable.

"I absolutely loves seeing the things I grew up with as a young Arab girl that I became insecure about – like my thicker eyebrows, dark hair, heavy eyeliner, my smokey eye, bigger lips – becoming trendy because around me the beauty standards were skinny, blonde and having big blue eyes," says Yasmine Abo-Shadi, an iconic Hijabi influencer who is known for popping off in her vents about critical issues within the Arab and Muslim community on TikTok.

"That being said though, the Kardashian and the Jenner family are masters of cultural appropriation and the thing that really upsets me is that yes – there are young Arab girls that are really happy right now, and feeling more confident because their traditional looks are being appreciated right now. "However," she notes, "it is just a trend."

Abo-Shadi is concerned about what happens when that trend passes. "What really, really sucks about it is that it's only for now and at the end of the day the family is appropriating it just for the moment, and it's a shame to know that in the future it won't be the reality for the next generation of Arab girls because the next trend will change and they will see a different beauty standard from someone else."

The concerns of glorifying Arab women's bodies, looks and style stem from a long history of orientalism – a term coined by the late Palestinian professor Edward Said. You can spend an entire college semester studying the concept, but in short, orientalism is how Western societies look at Arab countries as "backwards" and that the women are "in need of saving" from their society. Seeing an influx of appreciation of Arab women's looks can be concerning, as it could be conflated with exoticizing their features.

We're in a moment of seeing a lot of recognition of Arab traits and looks being appreciated on a wide scale. Our favorite prominent influencers like Fai Khadra, Younes Bendjima and the iconic Hadid sisters are some of the most iconic fashion influences at the moment. What they all have in common, which may shock those who don't know, is that they're all Arab.

Yes, Arabs are not the Jafars and the terrorists of yellow and brown-tainted movies: Like any other ethnic group, we have a multi-layered and beautiful history of fashion, culture and yes, pop star sensations. Shout out Kylie for the representation (question mark?), but I'm good with streaming Haifa Wehbe.