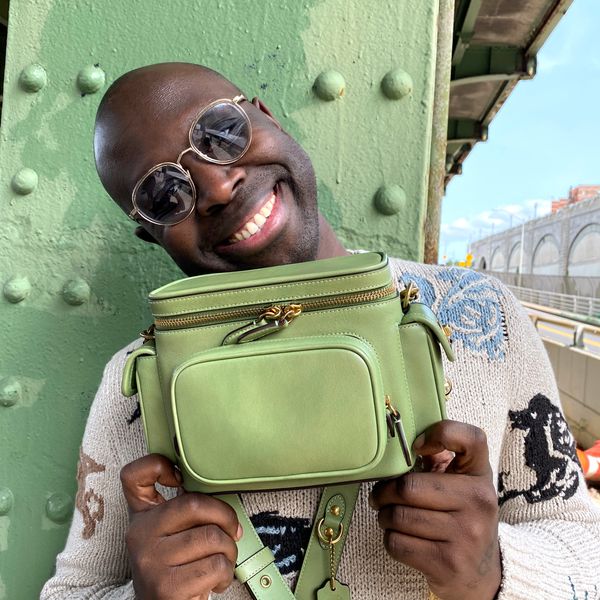 Since joining the Coach family last year, Bob the Drag Queen has done everything from go full rainbow glam for the brand's "We C You" Pride campaign to shooting in a huge Upper West Side mansion with Kate Moss. But for the latest collaborative project, dubbed "Coach Forever," things were decidedly more pared back.

In lieu of a flashy runway show during New York Fashion Week, Coach opted to present its Spring 2021 collection via a lookbook starring friends of the house like Megan thee Stallion and Rickey Thompson in addition to Bob. The portraits were shot remotely around the world by Juergen Teller, with Bob's shoot taking place on subway platforms and Brooklyn waterfronts.

"It was interesting to shoot as it was done during COVID through Zoom with the videographer in London, and he was shooting through someone else," he tells PAPER. "It was it was very 2020." This time around, Bob was out of drag and sported casual wares, like printed sweaters and shoulder bags from the new collection. ("It was a lot more comfortable, that's for sure," he says.)

With Coach Forever, Creative Director Stuart Vevers was intent on finding new ways of doing things. This meant featuring a mix of new, vintage and archival designs as well as incorporating re-contextualized pieces from Fall 2020. "It was important to me to challenge how we create our collections, and consider their impact on our communities and the planet," Vevers said in a statement.

As such, he wanted the casting to "tell a story about the enduring importance of community and inclusivity." Bob shares a similar outlook, recognizing the importance of representation across all aspects from underserved communities. "I think that drag visibility is queer visibility," he says. "Drag queens don't represent the entire queer community, but we do represent a significant amount of people — specifically trans women, queer men, non-binary people, and also lots of cis-gendered women who also do drag as well. It's is an art form that is predominantly done by underrepresented people."

As for what's next, Bob is looking forward to filming (safely) again for his Emmy-nominated HBO show "We're Here" which just got renewed for a second season. He counts the experience as one of his biggest highlights in a year marked by uncertainty. "To be the host of an HBO show, to be nominated in our first season, that was all quite remarkable," he says.

Additionally, Coach released "A Love Letter to New York," a collection made by New York artisans in support of the city's fashion community. You can browse a selection of items, available to shop now, in the gallery below.