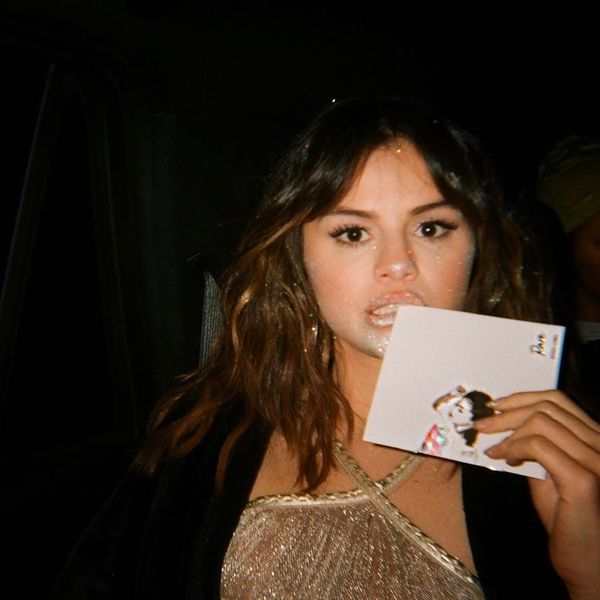 Few words used to describe a forthcoming body of work have the ability to simultaneously thrill and strike fear into the hearts of pop fans more than "personal."

Granted, Selena Gomez didn't exactly hammer the term to death as a talking point ahead of the release of her third solo studio album, as other musicians have done in the past. But the idea that this would be her Most Personal Album to Date™ was implied from the start, beginning with Rare's stripped-down, piano-led lead single — and, now, her first Billboard Hot 100 No. 1: "Lose You to Love Me."

The solemn song feels like an exorcism — or at least a final adieu to a certain on-again, off-again Canadian ex-flame who recently married someone else. Justin and Selena's was a rocky romance that resulted in songs scattered throughout the discographies of both artists for years, from "Love Will Remember" to "The Heart Wants What It Wants."

The message is clear in the song's lyrics: "And now the chapter is closed and done/And now it's goodbye, it's goodbye for us."

It's taken Gomez longer than her contemporaries to shed her Disney image. Miley Cyrus had long been twerking and tonguing her way out of tween idol status for a decade, and Demi Lovato came clean about her own personal demons years ago. It's no secret that Gomez isn't exactly considered a vocal heavyweight. (Let the record show, however, she did serve more full-bodied yelps back in the teenybopper years. See: "A Year Without Rain.")

But with the release of Revival in 2015, she'd finally figured out what works best for her, and has since become the most dependable deliverer of compellingly breathy-pop a muse for left-of-center, ASMR-style production from top-tier producers and songwriters. It's key that she's also become an active participant in the crafting of her output ever since departing from the Disney machine.

After years of providing banging electro-pop anthems like "Naturally" and "Love You Like a Love Song" with The Scene (yes, they were an actual band), she slowed things down to a near-whisper with hits like "Good for You" and "Hands to Myself"; a stark contrast to the pounding EDM beats of 2013's Stars Dance, and a proper reintroduction to Selena Gomez, the solo star. She further honed that more spacious and sultry sound on the songs that came in the five years between Revival and Rare, specifically 2017's "Bad Liar" and "Fetish."

Pop is in a different place than it was even three years ago: the most celebrated acts these days aren't necessarily the ones offering escapism as entertainment, but rather the most relatable — from Taylor Swift channeling her personal and professional relationships into Reputation and Lover, to Lana Del Rey's moody ruminations about the state of the world on Norman Fucking Rockwell!, to MUNA's anxiety-riddled synth-pop anthems. Some impervious superstars are seemingly immune to the pressure of it all. But Selena Gomez, the fifth most-followed person on Instagram, is not one of them. In fact, she's become increasingly open about the negative effects of fame and social media on her mental health.

Since Revival, Gomez has gone through it in her personal life: highly publicized heartbreak, emergency surgeries and medical diagnoses, extended stays at treatment centers and prolonged absences from the public eye.

Instead of succumbing and stepping away from the spotlight for good, however, the artist has pushed through and combined all those difficult emotions into an album five years in the making: Rare finds Gomez unquestionably more comfortable, more confident, and keenly aware of the strength in vulnerability.

"I don't have it all/ I'm not claiming to/ But I know that I'm special," she coos atop a propulsive drum beat on the title track and opener, "Rare." The song, a natural continuation of the musical groundwork laid in "Bad Liar," supplies a refreshing, realistic burst of self-confidence that carries throughout the record.

These days it seems Gomez is quite content with what she has to offer. For anyone who doesn't recognize and reciprocate that? Well, that's their loss. (No offense to the scribes behind her catchy 2011 empowerment anthem "Who Says," but it also feels like Selena actually believes what she's singing this time around.)

Despite what the album's lead single might suggest, Rare is rarely all that heavy. Gomez is mostly allowing herself to feel liberated and have fun again. (Literally, there's a song called "Fun.") As a result, this album largely feels like a sigh of relief. (Well, lots of sighs. That is her now signature sound, after all.)

"I kickstart the rhythm/ All the trauma's in remission/ No, I don't need permission," she declares across the slick bass line of the Mattman & Robin-produced "Dance Again," a celebratory, dance floor-friendly highlight that feels particularly poignant coming from someone who's felt physically and mentally unwell for years.

The Ian Kirkpatrick-produced "Look at Her Now," released at the same time as her chart-topping ballad, similarly finds Gomez shaking off the ghost of her first love with one of the album's most catchy and playfully glitchy mmm-mm-mm-mmm-mm-mm-moments.

Those songs, and many others, mark the reunion between Gomez and her Revival songwriting collaborators Justin Tranter and Julia Michaels, who've forged a close friendship over the years, penning songs together based on candid conversations and journal entries. As a result, despite the delay, Rare appears to pick up right where she left off five years ago.

"Let Me Get Me," for instance, plays like an evolution of Revival's "Me & My Girls," finding Gomez shimmying on the dance floor with her friends right past what RuPaul would refer to as her Inner Saboteur.

"No self-sabotage, no letting my thoughts run/ Me and this spiral are done /Burn this camouflage I've been wearing for months," she pledges above the shuffling dance floor pulse, weaving her way through her demons. "Tryna let a little happy in for once."

"Fun" also feels like a Revival follow-up, featuring all the hand-clap funkiness of "Hands to Myself" — with a similar sentiment, too. The fling described in the lyrics sees the star dabbling in a bit of mischief with someone who isn't The One in the long run — fans speculate The Weeknd."My kind of trouble likes your trouble too," she flirts, then gets a little cockier on the Camila Cabello-esque "Ring": "I'm one in a billion, baby, don't you agree?"

Perhaps no song on Rare is more representative of what Gomez does best at this point in her career than "Vulnerable," a melancholy groove tucked into the center of the record, co-produced by The Monsters and the Strangerz — the Miami production duo behind everything from the Stars Dance yelper "Forget Forever" to Kylie Minogue's "Sexercize" — and Jon Bellion who, aside from his own output, co-wrote Eminem and Rihanna's "The Monster," as well as Halsey's "Graveyard" - and, importantly, "Damage Control" from Katharine "Open Toes" McPhee's highly under-appreciated Hysteria. "If I show you all my demons, and we dive into the deep end/ Would we crash and burn like every time before?" she ponders above a hypnotic synth pulse, recalling similarly rich, endlessly replayable songs like Drake's "Hold On, We're Going Home" and Robyn's somber dance floor masterpiece, "Honey."

Despite a swooning loved-up moment on the Bebe Rexha co-penned "Crowded Room," Rare is mostly about falling out of love and being real about it.

Towards the end of the album, perhaps thanks to an added boost of liquid confidence ("I might as well just tell you while I'm drunk"), Gomez seals the deal and lets loose her last remaining fuck with the swaggering "Cut You Off," one of the only explicit-rated songs of her career (gasp), dedicated to shedding the "extra weight" she carried for "1,460 days." Gee, who could she have been dating for that long?

"How could I confuse that shit for love?" she ponders.

Appropriately, Gomez sets her sights on a brighter future with the atmospheric and starry-eyed closer "A Sweeter Place," a spacey, strange hip-pop collaboration with Kid Cudi and MNEK.

Lyrically, it's one of the album's most revelatory moments, as she describes what she's been through in the past few years.

"You really wanna know where I've been all this time, so lemme tell ya/ Got two feet on the ground and felt what real is like/ Livin' out of the scene, out in the wild/ Learnin' to breathe up in the clouds, far from the crowds/ I can't believe I can be loud/ Holdin' hands with the darkness and knowin' my heart is allowed." Rare is an album about being kinder to yourself along the journey — be it seeking help, getting out of bad situations, embracing your demons, or a little of all of the above.

There are bigger, catchier bangers and there is more frivolous fun to be had in Selena Gomez's back catalog, but this is undoubtedly the album with the strongest, most cohesive point of view of her career. It's the most authentic to who she is as an artist, with her own taste, in her own words — by far. And in a way, she's only just begun hitting her stride as herself.

Just days into a new decade, it feels appropriate to kick off a new year in music with Rare, a clean slate of an album filled with catharsis, clarity and plenty of space to breathe. Sage the room. Shake off the heaviness. It feels so, feels so, feels so good to dance again.