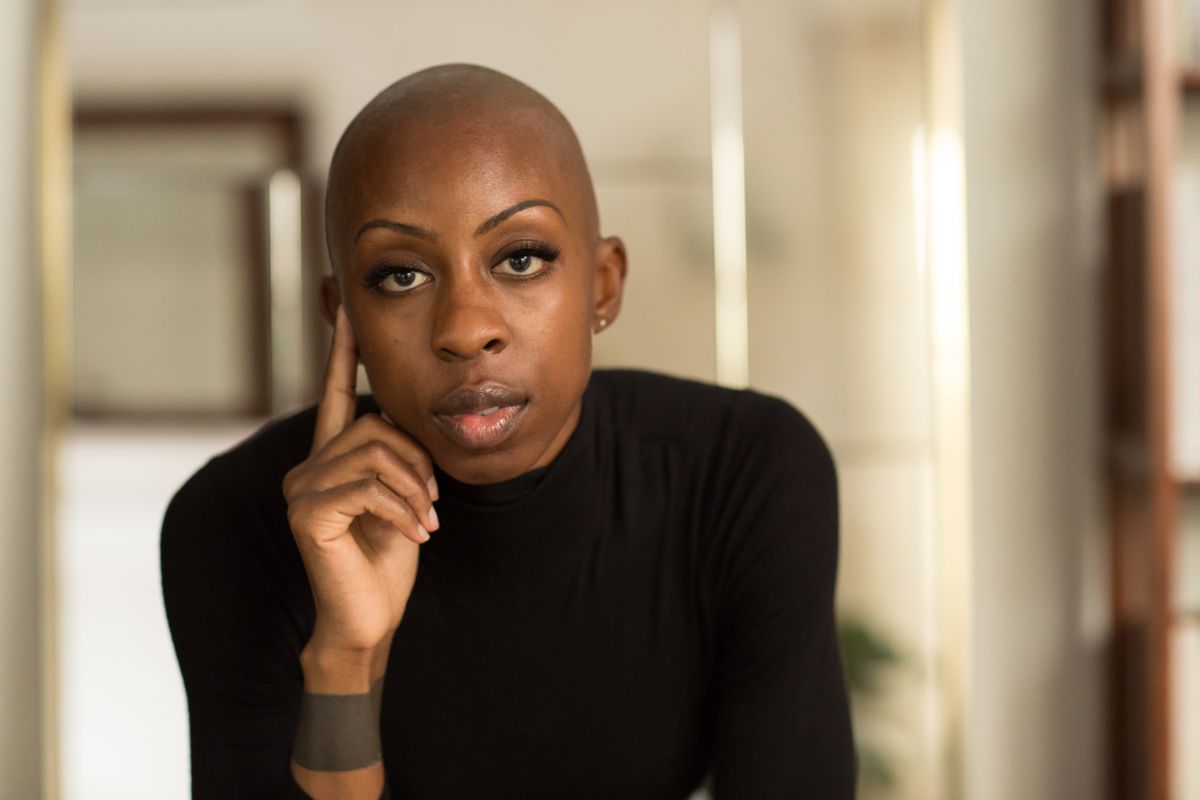 "Amazing Grace, how sweet the sound. That saved a wretch like me. I once was lost, but now I'm found. Once blind but now I see..." When we hear, sing or read these lyrics, most immediately think of the popular hymn from which they came — a hymn sung at most Black churches. For many, when our minds picture the "wretch" repenting for her sins, we conjure the image of a Black woman asking God for forgiveness. But this perception, which may simply stem from the song's history and popularity within Black churches, is false. What very few know is that the "sweet" lyrics were actually written by a newly saved slave trader who found repentance in the later years of his life.

This important historical fact is one of many that filmmaker Oge Egbuonu shares in her new documentary (In)Visible Portraits, released on VOD today. The film explores the depths of the forgotten Black American Woman experience — one that is filled with untold hardships, grace, resilience and intellect.

Through a compilation of interviews, anecdotes and narrations by scholars and authors, the other side of America's story is unlocked. The all-too-often denied platform and space to dismantle false perceptions and stereotypes is broken by celebrating the history and achievements of exceptionally strong women that "were never meant to survive as human beings, but who are seen as human beings — rebelling against a good thing," as stated by Dr. Patricia hill-Collins. For once, there is no sugarcoated interference with the facts, which Egbuonu reveals through her interviewees' stories of slavery, sexuality, injustice and fear.

Related | Here's What Happened When We Asked Twitter for Black Art

Egbuonu describes (In)Visible Portraits as captivating conversation that unpack the layers of intersectionality and oppression that molds the Black American female reality — one that is typically buried under words like "strong" that were derived from male oppressors who wanted to hide their raw, poetic and triumphant souls.

On Juneteenth, we say their names out loud: Dr. Patricia Hill Collins, professor of Sociology at the University of Maryland; Poet Jazimine Williams; Helen Jones, the mother of a young man murdered in a staged suicide by prison guards; Author Joy Degruy and several more who share their experiences and their voices in this powerful doc.

Egbuonu, whose previous work includes having been a producer for Loving, spent eight months doing extensive research on the topic of Black women and their influence in America — but the Nigerian-born filmmaker (and yoga instructor) says she is just beginning to touch the surface of who she is.

How was it growing up Nigerian in America? What are some key experiences that were different from your parents?

The whole experience of growing up as a Nigerian in America, I think is very different from my parents'. I grew up with my mom, my mom was brought to America by my dad when they got married. The first four years of them being married, he was very abusive; I mean, he beat her on so many occasions until the point that she decided to leave when she had me. Well, he actually left and took everything when she had me. So as I was growing up, my mom wasn't really present because she had to work many different jobs. I think that within itself is a different upbringing. It's the culture that's so different, too. The Nigerian culture is very reserved and they are very conservative. I grew up in a very unconventional way because I decided to. I grew up not living by the rules that were set for me. For example, when I moved to LA 8 years ago, my mom took it very personally and didn't speak to me for months. She felt that I was abandoning the family and leaving her, but I explained that this is a part of life and I was doing it for me. Or, when I shaved my head 6 years ago, she did not understand that. For her, it was like, Are you on drugs? I was confused as to how someone connects the two. There's just so many points where it was different and difficult to understand.

What age did you come into yourself? How did that transition?

For me it hasn't only been one moment. I think it really was my introduction to yoga when I moved to LA. I had never heard of it before, nor did I understand what it meant. It just cracked something open for me, in starting to heal. For me it was really on the spiritual and mental level of it, in comparison to the physical practice, so I wanted to teach it. This practice was allowing me to unlearn some parts of myself and uncover really who my true self was, the shadow side and the light side. And in doing so, it allowed me to open myself up to so many different avenues and explore the different aspects of me. It really sunk in that I didn't have to be perfect. It really focused on allowing me to absorb the imperfections of who I was, and allow myself to explore different things. I'm really just learning who I am and I'm 35.

When did you decide to pursue filmmaking?

I got into filmmaking when I got into LA, and that happened by chance. The company that moved me to LA was a retail job, and I ended up quitting because it wasn't aligned with my morals and values. After that I got introduced to yoga, and then I started teaching yoga. One of my private clients offered me a job and said, "Have you ever thought about being in entertainment and film production?" At first I really wasn't interested in it, I just didn't think it would be for me. And he kept being very persistent, and he kept saying that he saw something intriguing in me. After a few talks, I told him I would try for three months and then it spearheaded my career in film making.

How did (In)Visible Portraits come about and how did you decide on the format?

I was on the production team for other films, and this was the first film I actually directed myself. I changed the format of it a couple times, and then I finally pitched it. I realized that there was nothing that creates Black mothers and Black women. If I am to create anything, it would be about Black women. In the process of making it, it was a lot of research, maybe 6-7 months before I actually started production. Reading books by Black women, 14 hour days of just research, fully immersing into the history of it. In the process of doing so, I reached out to a few friends. So I started a little experiment with my friends after that, and I told them to message all the Black guys they know asking them a question: If you could describe a Black woman in three words, what would it be? We got back maybe 100 responses, and wrote out every single word they said. If I got [the word] "angry" 40 times, I wrote it down 40 times. If I got "beautiful" 20 times, I wrote it down 20 times. As I was doing my research, I got confused why I did that and I kept looking at the sheet. Three words kept popping up to me, which were "hurt," "beautiful" and "resilient." So I tried to tell the story through these three words. In terms of hurt, I really wanted to explore it from a three-dimensional perspective: Mental hurt, physical hurt and emotional hurt. Tackling resiliency as a double edge sword. I also wanted to tap into how faith played a role and then celebrate our beautiful attributes and contribution to the community. I wanted to make it like a love letter, hence the poem written to a Black woman from a Black woman.

What would be three words or actions that would fast track this progress to our benefit?

You have to tackle self-reflection first [in terms of] how you are showing up in the world. You have to do the work and really focus on how you are actually showing up for Black women, not only for yourself. We can scream all day long about wanting to be protected and loved, but if you don't do your own work yourself, it won't work. The collective idea of self-reflection and the idea of the uprising especially right now is very appealing to people. The first call to action is to continue to question the things you were told to be true and show up better.

What were the requirements when it came to the women you decided to showcase in your film?

There really weren't any requirements. I just wanted everyone to be relatable, and I wanted to pick scholars and activists and authors and just everyday women that look like me.

"I want viewers to understand the true history of the Black [female] experience — to protect Black women, to love them, uplift them."

Looking back, is there any question you wish you had asked the women in your film but didn't?

No, well, I have so much unreleased footage. About 30 hours more. Hopefully the goal will be to turn this into a docu-series. Also get this in curriculum at schools. There's just so much more to explore as a Black woman.

Were there moments or instances that really shocked you while listening to their life experiences?

I mean, the whole process was difficult. It really rearranged me in the most beautiful way. Three months into this, I had to go back to therapy, it was too much to hold. As you are reading these stories about the hurt that all these Black women have been through and also everything I hadn't learned in school and the history behind it all, it was definitely challenging in the most beautiful way. You have to become your own protector as a Black woman.

We are currently at a turning point in America, hopefully for the betterment of our future. What would you like to see happen and how do you plan on contributing?

This allows us to continue to imagine what's possible. This society thrives on imagination and what we were led to be taught to be true. We have to give ourselves permission and believe what can be true for us in the future. Our mental state is the most powerful thing we have, hence the protests and everyone using their voices. We can reimagine a new world — [one] with collective healing and progression. The revolution won't be televised, which means everything starts in the mental [space] first.

What's the main thing you wish viewers will take in from your message?

I want viewers to understand the true history of the Black [female] experience — to protect Black women, to love them, uplift them.