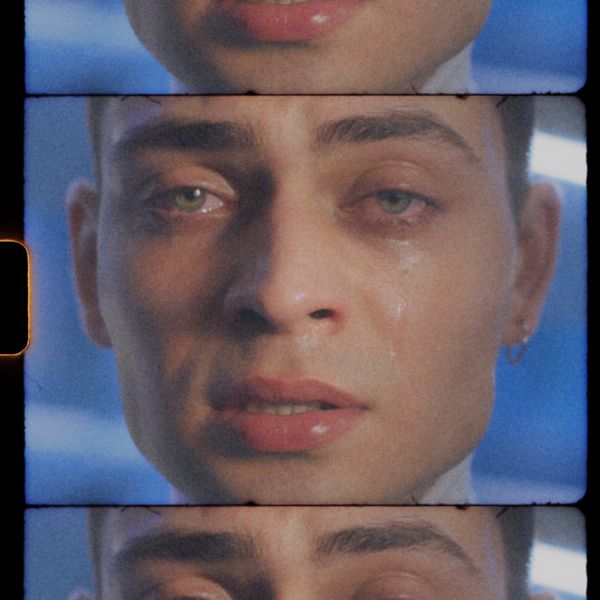 Photographer and Art Director Matthew So couldn't stop crying as members of his family recently suffered various illnesses. The tears born from So's grief blindsided him, and he found himself desperate to hide this expression from others.

So realizes that, like many, his desire to appear unfazed and detached is heavily influenced by societal policing of men's emotions. Though the climate toward male vulnerability has grown less harsh in recent years, it remains true that if you are a man, to show visible sadness, even in the face of traumatic events, is to risk being perceived as weak or powerless.

Growing up, So says he can count on one hand the number of times he's seen his father cry — "and I still have fingers to spare." To fight against this conditioning, and further normalize male sensitivity, So created an emotionally charged photo series called Tears Like Mine.

A pitch deck So arranged for Tears Like Mine includes a number of sayings commonly heard by male-identified people, including "don't be a pussy" and "stop being such a fag." These create a culture of what we now call toxic masculinity: men who act out of fear that their self-constructed idea of masculinity is forever on the firing line, worthy of fighting and even dying for. But the cost of toxic masculinity isn't just an emotional one: a recent study found that promoting damaging gender roles and "man up" stereotypes via advertisements and products costs the U.S. $15.7 billion each year.

Needless to say, So's images of diverse male-identified people weeping — sometimes in the arms of other men — are powerful. The images appear like film strips, as if documenting a continuum of emotional expression. Some surrender to their emotions, and others appear to be fighting it, showing the range of what it can take to open up. Below, So tells PAPER what making Tears Like Mine has been like for him, and how is learning to accept his own sensitivity.

"In moments of pain, American men suppress their emotions, hiding them behind the ruse of what a man should be. This series gives visibility to a new ideology of manhood."

In America, we teach boys at a very young age that tears are a sign of weakness. We teach boys to hide and suppress any emotion that might be perceived as something other than "masculine." We often forget to recognize that masculinity is a construct — one that is led by example. When men start to show themselves in a more vulnerable light, it opens the door for other men to follow suit. For this series, I approached my friends challenging them to be vulnerable with me. It's tough to ask men no matter where they lay on the spectrum of gender expression to be vulnerable. But I learned that when I explained my struggle, it was easier for them to do the same.

Do you find yourself feeling more emotionally open and available these days?

This is a tough one for me to answer because it's not so black and white. Sure, I am more emotionally open than I've ever been before, but I still have a long way to go. This project helped me bring my subconscious, suppressed behavior to the forefront — to be more mindful when it comes to expressing myself and to let go of the idea that being emotionally void connotes strength. Letting go of that style of thinking is powerful and freeing. But unlearning codes so ingrained in our culture takes time and my personal journey is ever-evolving.

What do you hope people, especially men who struggle with showing their emotions, gain from seeing these images?

I created this series for my younger self — to show him, and others like him, that masculinity is accepted as a spectrum. Boys don't need to prove their masculinity, it's innate. In moments of pain, American men suppress their emotions, hiding them behind the ruse of what a man should be. This series gives visibility to a new ideology of manhood. These images paint a picture and construct a world in which men are given the space to emote and not have the act of expressing their feelings diminish their masculinity.