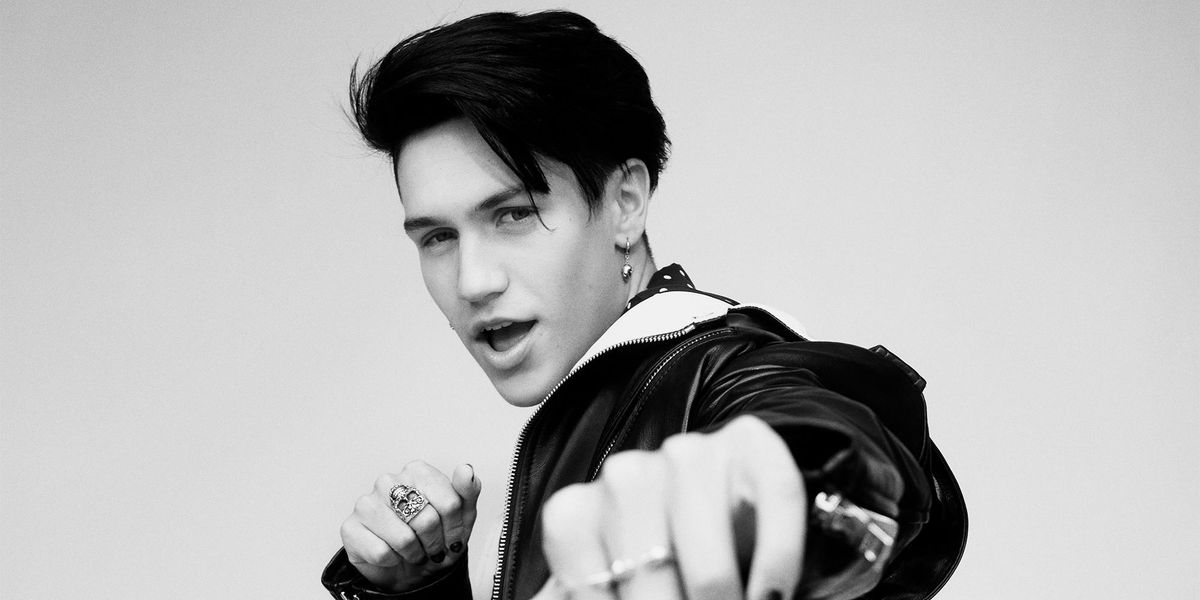 Chase Hudson — or, as he's more widely known on the internet and now in the music world, LILHUDDY — is at home in Encino, introducing me to his new lizard over Zoom.

"His name is Bunny," he tells me, "because he jumps." He's into reptiles, I learn. He also owns five snakes.

Eighteen-year-old Hudson is sitting in his bedroom, complete with tall marble columns and a bunch of Pokémon plushies. The sun is shining outside his window, as it tends to do in Los Angeles. In true 2021 fashion, he lives in a mansion with friends, many of whom are fellow social media stars and content creators. Lately, he and his housemates are transforming their living room into an arcade. You know the vibes: pinball, foosball, air hockey, plus cotton candy, hot dog and popcorn machines.

Hudson, who has nearly 30 million followers on TikTok and 11 million on Instagram, is excited. We've been chatting about his career, and the particular nexus it's at right now: he's in the midst of pivoting his social media stardom (predicated on charismatic lip-syncing videos and his signature e-boy style) into the realm of pop-punk music-making, and he's finally getting to release everything he's been working on for the past year. His first single, titled "21st Century Vampire," dropped in late January, and his second single, "The Eulogy of You and Me," was next, accompanied by a pair of shiny music videos directed by veteran videographer Joseph Kahn. His first album is due out this summer.

LILHUDDY is riding a moment, and he's in good company; "Eulogy" was produced by Travis Barker, the blink-182 drummer turned industry mentor who's leading a post-Calabasas pop-punk revival, in part by shepherding a new cohort of protégées from the TikTok set. There's a lot of momentum under Barker's wing: "I think it lives in Travis the most," Hudson says, "because I think Travis is the person that wants it more than anyone: to bring pop-punk back to where it was 10, 15 years ago." Barker and his frequent collaborator Machine Gun Kelly, Hudson says, are "paving the way for all these other musicians to kind of build with them, [to create] the new era of pop-punk," including fellow TikTokker Jaden Hossler, who performs as jxdn. Hudson even starred in MGK's 49-minute music video film called Downfalls High, which premiered on YouTube in January.

"Kells has a really big fan base that's younger — so do I, so does jxdn, so does Yungblud," he says. "Teenagers, they really dig this shit." (Notably, Barker has two children, ages 17 and 15, who've been up on social media for years; his son Landon also appeared in Downfalls High.) If the last pop-punk wave reached its mainstream peak in the mid-aughts MySpace era, then this next one ebbs in the wake of Soundcloud and TikTok, with major nods to the late emo-rap luminaries Lil Peep and Juice WRLD. A new generation by way of Gen Z, who have definitely already lived through too much awful shit.

As someone who was once active on LiveJournal, Xanga and Neopets, during my chat with Hudson I started thinking about when and why I gravitated towards pop-punk. Hating where you grew up feels like a major impetus. In the last decade or so, the same could be said for wanting to make it big on social media; many YouTubers and other internet personas have said they sought out online communities (and acceptance) because they felt ostracized in their hometowns. Both of these things are relatively true for Hudson, who was born in 2002 in Stockton, California — a city south of Sacramento and east of San Francisco that made history for being the second-largest American city after Detroit to file for bankruptcy following the 2008 financial crisis. He lived in a poor area and was bullied as a kid. He was into fashion and grew up in a close-knit musical family, getting his first taste of pop-punk from listening to his older sister's iPod Nano.

"I wanted [all] the attention in a room more than anyone [since] I was born. I loved doing stupid and dorky shit."

In his early teens, he says, "It was the joke of the town to make fun of me but also try to be my friend. I feel like everyone kind of has [this] rulebook of what you can and cannot do. And I wasn't like that at all." After getting into social media in eighth grade, he'd get called out for being "a musical.ly boy," eventually transferring from his public high school to online school (another common move for aspiring social media personalities) during his sophomore year. "People were just assholes where I grew up, and I guess that's kind of made me who I am today."

But he's also always loved attention. "All of grade school, I was just a shithead," he says, laughing. "I wanted [all] the attention in a room more than anyone [since] I was born. I loved doing stupid and dorky shit." When he made his way to LA at 16, he co-founded Hype House, the proverbial TikTok content mansion, a year later. Since then, he's posted thousands of TikToks, dated the app's biggest star, Charli D'Amelio, and landed in his fair share of requisite social media beef (culminating in a frankly bonkers Notes app screenshot). Suffice to say, LILHUDDY's got plenty to make a big ol' pop-punk album about.

The upcoming album, Hudson says, will chronicle a love story, spanning romance to heartbreak. There'll be angst ("I guess the last kiss was the kiss of death/ Now you're dead to me, and it's R.I.P"), and boredom ("I guess I'm just meant to be sleeping all day/ I don't got no fucking life/ I'm just a 21st century vampire"). And there'll definitely also be some TV-14-slash-TV-M troublemaking, very à la early blink-182 (think: the thrill of getting high and ditching school, or seeing your girlfriend naked).

The move to release "Vampire" as the lead single — a snarling bop, and an obvious nod to his persona as the so-called Half-Blood Prince of TikTok — was a studied one. "I wanted to put in place me as a brand before I released anything else that kind of shows my story," he says. "I wanted to be like, 'Alright, this is who the fuck I am, and now I'm going to tell you what I do.'" He knows he's going to be recognized as the mononymous @lilhuddy, TikTok's e-boy heartthrob — before he's known for his music. And he's hoping that'll change once people hear what he's been working on, though there'll surely be enough for lyrical speculation; the second single, "Eulogy" is an upbeat heartbreak anthem that gave LILHUDDY an opportunity to channel his "very far past relationships that I never get to play or speak on."

"You know how the song 'Driver's License' made everyone feel like they were going through that breakup?" he asks me, referencing 17-year-old Olivia Rodrigo's current smash hit. "That's how Eulogy's going to be. Like, 'I'm done crying. Fuck you!'"

"People were just assholes where I grew up, and I guess that's kind of made me who I am today."

On that note, he remembers the first pop-punk song he ever heard—The All-American Rejects' 2008 hit "Gives You Hell" — "because it was one of the first songs that didn't censor the word 'hell' on the radio." He'd scream along to the chorus in the car just to piss off his family: "Hope it gives you hell," he mock-sings. "Hell. H-E-double hockey sticks. Make sure you heard that. And my mom would turn it off." On the other hand, another music-world revelation arrived when he tagged along with his One Direction-obsessed older sisters to see the band's 2013 concert movie, This Is Us.

"I thought that was the most inspiring movie I had ever seen," he tells me, though his second-most influential flick may be a little more surprising: The Wolf of Wall Street.

What could the story of Jordan Belfort possibly have to do with the story of Chase Hudson? Well, apparently, it makes LILHUDDY want to write a to-do list.

"I love the hustle," Hudson says, laughing. "Besides all the hookers and the drugs and everything that he had, [Belfort] had a hustle that made me — it just gives me this hustle mindset. Every time I watch it I'm like, 'Oh my god, I have to go out and be a millionaire now.' And I start scheduling in my notebook. I actually become productive and I'm like, 'Did Wolf of Wall Street make me do this?'"

At one point during our Zoom call, when Hudson mentions that a few days earlier he'd worn a Green Day American Idiot shirt he'd thrifted on Melrose, he scrolls for a minute or two through his fan accounts' Twitter posts to show me proof. Is it weird to have this chronicle of his public life that he can just access at any time? "Yeah dude, I can just find everything that I've done in the last few days," he says, before giving up on finding a photo of the shirt; it was already too many posts back.

For the Vampire of Melrose Avenue, the journey to the top could not have happened at a stranger time. As is undoubtedly the case for other big-name TikTokkers — the app's popularity skyrocketed during the first few months of quarantine, turning many of its young stars into certified celebrities in a matter of months — a global pandemic has been a weird moment to not only garner a bunch of new fame, money and followers, but also to translate it all into a relatively more blue-chip career path.

"I have absolutely no clue what kind of name I'm making for myself, because I cannot really experience what celebrities felt, [like] where everyday they would get off a plane and 500 people would know exactly where their airline was getting off."

"It's the worst best time for it to happen," Hudson says. "It sucks in the way that I have absolutely no clue what kind of name I'm making for myself, because I cannot really experience what celebrities felt, [like] where everyday they would get off a plane and 500 people would know exactly where their airline was getting off. I haven't gotten to that level at all yet." He's never even performed music live in front of an audience — though, for the record, he can't fucking wait until that sort of thing can happen again.

"I feel like I'm just getting started now, to be honest," he says. He knows he's on the cusp of something, and you can tell he's hyped about it: "I always wanted to do music, but I started on social media and made a fanbase before I did what I really wanted to do. I wanted to take my time, make sure I knew what I was doing and that I was doing everything correctly."

"I feel like this is the new era of me, and kind of where I'll start to be known," he says, eyeing his post-2020 trajectory — at last. "From this music, and from this year."

'The Eulogy of You and Me'