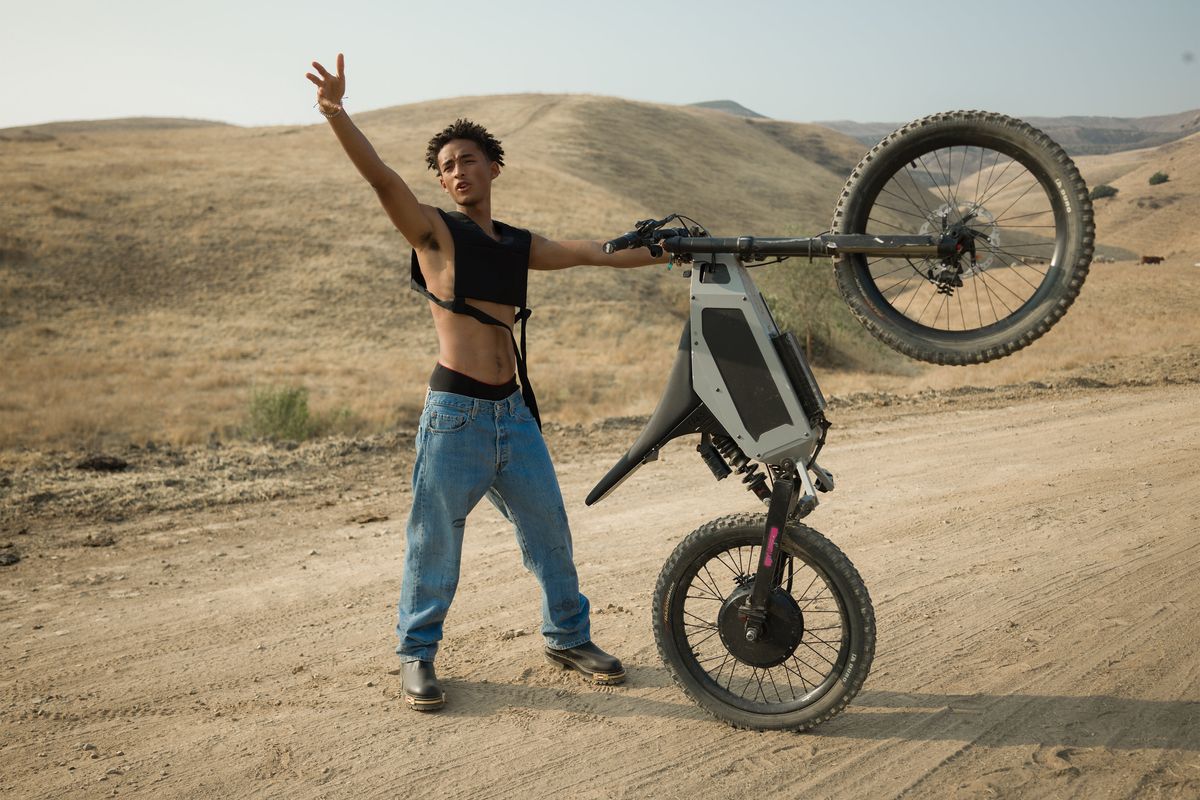 So much of growing up is sifting through the things that were handed to you and deciding which ones you want to keep. Everyone has to do it — either consciously or unconsciously — but it's even more complicated when you're coming of age in the public eye.

It would be easy, and understandable, if Jaden Smith just wanted to be Jaden Smith, son of Will and Jada. But he has bigger plans. At only 22, he's had his hand in more creative pursuits than most people have the energy for in a lifetime — music, fashion, even anime. Not to mention his other work, which includes a sustainable water company and the nonprofit he co-founded which provides innovative water filtration systems in Flint, Michigan. The urge not to be defined by any one thing seems to drive him, and it might be his only constant.

That makes him a very 2020 celebrity: ethically aware, multi-hyphenate. With the political, social and literal climate being what it is, Hollywood's prevailing passivity no longer gets a pass. But Smith, always insisting on being part of the conversation, has never inhabited that old world.

He's been busy over the past few months. His third full-length project CTV3: Cool Tape Vol. 3 dropped in August, signaling a shift away from the frenetic hip-hop that characterized his first two projects to explore sunnier pop sounds. But don't call it a reinvention. Just another page in the book. On the next page he's working on an upcoming collection with MSFTS, inspired by one of his heroes, Nikola Tesla.

Smith hopped on a Zoom to talk about what he has going on, including his new series with Snapchat — called The Solution Committee — where he talks to activists and encourages young people to vote.

First off, how are you?

I'm doing all right, you know, considering everything that's going on in the world right now. I'm all right.

It's an understatement to say that this year has been hard. What have you been doing to just stay sane?

I've been trying to just exercise as much as possible and trying to stay away from people but get into nature as much as I can. I was just surfing earlier.

Woah, that's dope. I know that you were in the Bahamas when you were recording CTV3. Did that help inspire the direction of the album?

I love the Bahamas so much. I just really wanted to have a tropical vibe for this album. I just started to listen to a lot of different styles of music and a lot of different things like, just classic rock albums that I never really had dove deep into before and I really just took some time with those albums to really go on some journeys. While I was working on this it inspired me to start playing guitar and singing, learning how to sing harmonies and learn about music theory and just expand what I know and what I can do.

I know that you've mentioned the Beatles as an inspiration. Who else were you listening to?

Jimi Hendrix for sure. Chuck Berry as well. And also the Beach Boys. You know, the Beach Boys really inspire me because they feel so close to me. I love the Beatles so much and I love going to London and seeing locations that were important for them. But with the Beach Boys, there's so much I feel like I really know. I was just surfing earlier and they're talking about the same places that I go to. They talked about surfing at County Line and in Malibu in their songs, and I just think it's so cool.

I thought it was really interesting that CTV3 was kind of a prequel to your other albums. What was behind the decision to make an album now about an earlier period in your life?

I just feel like I'm still affected by these things that happened to me earlier in life, and specifically a relationship that I went through when I was about 15, and I just feel like in order to like really get through it and get past it I kind of had to go back and relive it, to accept certain things I haven't accepted about it. Revisiting really gave me the closure that I needed to keep moving forward.

The pandemic has obviously disrupted what would be a normal rollout for an album. People are gonna be receiving this in a different way than they normally would. Was that on your mind?

But when they get together, and can just be in the right place, it's going to be crazy. I feel like it'll be something that people will be able to experience hopefully next year. I want them to experience the album on a beach with a bunch of people, or in the pool at a party, you know. Really just with a bunch of people watching the sunset, chilling there with the people that they like, having drinks. Then when people listen to the album it is going to sound like a completely different experience. That's the experience I wanted.

My albums really grow on people. You know, when I first released my first album, Syre, people were like, "Yeah, that's cool." But now they're like, "Oh, we really love it."

This was a really different sound for you. Did you want people to see you as an artist in a different way after you released this?

You know, I just wanted them to see me for who I am. And I'm a little bit different now.

Your choices in fashion are what many people connect you the most to. I'm curious what inspires you to push the boundaries in terms of taste and gender expectations.

I love it. I think clothes can really excite people. And it can frustrate some people too. I like that. For me, you know, I just I'm just trying to catch the vibes. That's it. It doesn't really make me excited until I see how crazy people are going.

I know that you're working on a collection with MSFTS that was inspired by Nikola Tesla. How did those ideas come together, and why him?

We're just putting this information we feel like people really should know on clothes, so that we can be a walking billboard for just information that is important for all of us to know, to live better lives. Nikola Tesla didn't get the credit that he deserved. He inspires me a lot, so I have to, you know, try to give credit where it's due. And I just feel like Nikola Tesla is such a genius and is responsible for so many inventions in our modern world, that we wanted to really show love. I'm excited for the world to see it.

How did the The Solution Committee come to be?

I've really wanted to do something to come together and find a way to talk about what's been happening in politics, for a long time.

"I just want to give back to the world. It really calls out to me and I just follow it."

We wanted to make sure that we can get to the audiences of the people who were like, just turning 18, who just became eligible to vote, so they could really learn because really, it was catered towards a younger audience.

I think it's one of my favorite things I've ever done. It's just such a cool experience, it's so fun to do it, to talk to so many different people to really learn every show, and just develop a better grasp of politics in general. I want young people to know how we can play a role to really make a difference and cast our vote to help change the world. I felt like that was really important. I really wanted to help spread the message, because this is going to be one of the most important elections of our lives. So we really have to get out there and vote. I wanted to spread that message, but also educate myself and take you on a journey.

I know that you've been involved with social justice efforts in the past, like your work with JUST Water, and the water filtration systems in Flint. What compels you as an artist and as a public figure to do this kind of work as well?

I just feel like I have to. I just want to give back to the world. It really calls out to me and I just follow it.

You've been in the public eye your whole life, and you've really taken an active role in this moment instead of a more passive one. How has your understanding of what it means to be a public figure and an artist changed in the past year or so?

In the past, I never fully understood the platform that I have, and the amount of people who, whether they want to listen to me or not, do hear me when I speak. I mean, I understand the platform now. As I got older, I just realized, I really want to use my platform in ways that are going to help all of us, better the entire world and make a better Earth for all of us.

"I want to keep creating things that actually help people to live."

Yara [Shahidi]. She's just so smart and inspires me in so many ways.

What do you want your impact to be? With your work as an artist, and everything else that you do?

Down the line, I want to be an innovator, and an inventor. I want to become more of an inventor down the line. I like the work that I'm doing with 501cThree and more water filtration systems in Michigan and in other places too. I want to keep creating things that actually help people to live.

"This is going to be one of the most important elections of our lives. So we really have to get out there and vote."

This interview is for PAPER's America issue. What worries you the most about this country right now?

And then kind of on the flip side, what is giving you hope about America right now?

I think so many more young people understand their power. And that's exciting.