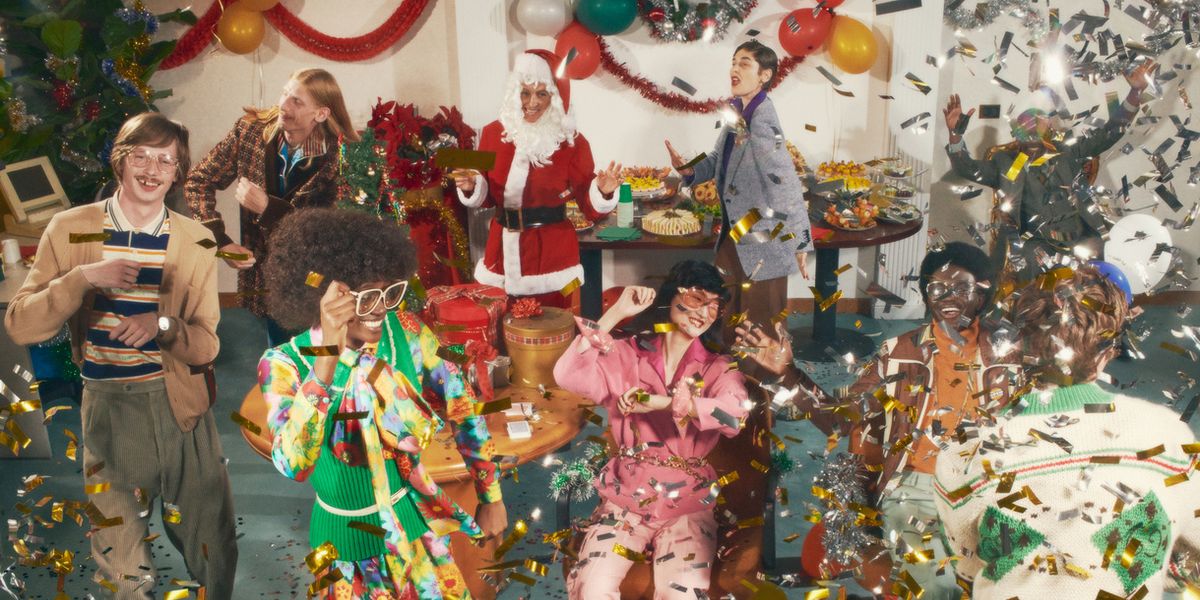 The holiday season is upon us, and while the COVID-19 pandemic may not be permitting traditional celebrations this time around, high fashion brands are still yearning to keep the spirit of "the most wonderful time of the year" alive with their own merry campaigns. Between Kate Spade New York's candid Christmas soirée and Versace's on-the-road escape to snow-capped mountains and tropical beaches, it's safe to say this year's holiday campaigns will have you pulling out the decorations and rocking around the tree. Peruse our top picks, below.

Sidia, the loungewear brand created by former Coveteur founder Erin Kleinberg, has unveiled its debut holiday campaign. Titled "A House Is Not A Home," the two-part video directed by Serville follows a diverse group of models — as well as Kleinberg's own 5-year-old daughter, Parker — as they lounge in an elegant mansion and explain what "home" truly means. As voiceovers detail how "home" is a shared, sacred environment made up by the women within it, the cast eats breakfasts on spacious floors, sips tea, texts and reads while gazing out of scenic windows.

In the ultimate display of luxe WFH, everyone is dressed in Sidia's latest white, olive green and golden sets, accessorized with statement necklaces and earrings that are utterly Zoom-worthy. As if this wasn't already ideal holiday attire for 2020, portions of the collection's sales will go to the Loveland Foundation, which benefits communities of color.

What makes a star? Well, Michael Kors asked Bella Hadid that exact question for his Holiday 2020 campaign video, which offers a peek behind the curtains of the bustling photo shoot. "I think an energy makes a star," she answered, smiling through a shimmering red lip backstage. Models Mayowa Nicholas and Salomon Diaz arrive on set shortly after, and the trio pose atop a red backdrop with the label's embellished handbags, evening dresses, metallic outerwear, and quintessential shining accessories. At the end of the video, Kors answers the campaign's beckoning question himself: "I think [a star] is the people that light up your life."

Irina Shayk stars in footwear brand Schutz's latest campaign, "On The Horizon," which spotlights sparkle, shine and plenty of textures perfect for the holidays. Shoe assortments highlighted include a pair of eggshell reptile-embossed boots, similar to the brand's kitten-heeled version from the upcoming Gossip Girl reboot. The accompanying video also shows the model in a variety of formal and casual styles, ranging from purple silk mules and PVC pumps to chunky platform sandals, patent leather boots and metallic silver brogues with hiking cord laces.

Ferragamo is "Unwrapping Joy" with its new holiday campaign. Against blank backdrops, a diverse cast plays with tinsel, twinkling lights and artificial snow to showcase the tradition of gathering with loved ones this time of year. Accentuating the shots are an array of gifts made to touch people's hearts and be worn for years to come.

Metallic sneakers, leather bracelets, botanical printed satchels and sweaters, and 'Viva' bags in matte red, black and gold are festive brand standouts. They're complemented by the house's classic bow-topped flats and heels, as well as loafers, wallets and belts emblazoned with its sleek Gancini logo. Add some of the latest Ferragamo tailored separates, silk dresses and knits to gifting list and you'll have holiday-ready ensembles everyone will want to find under their trees this season.

Alexander McQueen's latest campaign, photographed by Hanna Tveite, showcases a variety of gifts for the holidays like their signature wrap bracelets and sunglasses. There's also a range of metal and leather box bags embellished with eclectic rings, as well as jewelry accented with skulls, crystals and pearls, or in sleek bent metals. Other standouts include brand firsts like playing cards, letter charms and pendants that can be slid onto sneaker laces or necklaces for a personalized touch. You can find them online and at McQueen's new Soho flagship.

For its 2020 Holiday campaign, Leatherology is giving back to celebrate the spirit of family. This season, the leather goods brand is partnering with influencers LadyGang, Beau Ciolino and Matt Armato of Probably This, Lee Litumbe, and Thurman and Torrence Thomans of Tankproof for "Gift Joy." Each member created individualized gift sets meant for a variety of people, from a tote bag and makeup pouch for the "Bold Lady" to a pad portfolio, pencil tray, valet case and cord wrap for the "A Gift for the Self Starter." All of the chic sets are charitable as well: 50% of the proceeds will be gifted to H.O.M.E. Inc., Tankproof, Feed The Second Line NOLA, and A New Way of Life Reentry.

Missing your office holiday parties this season? Gucci's got you covered. This season, Alessandro Michele enlisted Mark Peckmezian and Akinola Davies, Jr. to take the brand's "Gucci Gift Giving" campaign to the '90s. Through a vintage filter, office workers await a disco-themed Christmas party and set up decorations — and when the clock hits five, champagne comes out and confetti fills the air. Clad in head-to-toe Gucci — as well as it's latest gifts, like sequined loafers, gloves and Marmont bags — the staff dance, exchange presents, and sing karaoke to a Yazoo soundtrack with pure delight that only the holidays can bring. Check out the video here.

One of the greatest joys of the holidays is returning home to celebrate with family, friends and loved ones, and while that might not be the case for everyone this year with the pandemic, Versace hopes to capture the anticipation of that reunion with its latest holiday campaign. Starring Irina Shayk, Adut Akech, Biaggio Ali Walsh and Louis Baines, the star-studded fashion film spotlights this year's unconventional season with a fantastical joyride in a glamorous, Versace-embossed convertible. Between wintry mountain backdrops and tropical escapes, each model embarks on their own adventure wearing the brand's latest collection with a backseat full of wrapped presents decorated with the label's signature prints.

Shot by Steven Meisel, Prada's 2020 Holiday campaign celebrates the leading Italian design label's pioneering aesthetic in the traditions of film noir. The cast — comprised of models Freja Beha, Maty Fall, Mao Xiaoxing, Rudolfs Valbergs and Melijne Schorren — occupies an isolated, ancient Roman property in Italy, named Villa Gnutti, first made famous in a 1981 shoot by Helmut Newton for the fashion house. There, each cinematic, black-and-white image captures the precise tailoring and refined lifestyle that runs in Prada's veins, featuring close-ups of the label's accessories worn while descending a grand staircase and casually tossed next to a chess board in a grass-filled courtyard.

Kate Spade's holiday campaign (and video) captures those dearly missed, candid moments of celebration. Centered around a dinner table, each image showcases the brand's standout accessories. A few handbags casually rest on the table between desserts, while the label's glossy domino-shaped clutch finds itself lost in a fruit bowl. But the main event is a big, fluffy white cat, who manages to weave among the guests and show off Kate Spade's best seasonal accessories while they're distracted by conversation and decadent meals.

Coach's "Holiday Is Where You Find It" campaign champions optimism amid the tumultuous year that is 2020. Calling on the house's global faces Jennifer Lopez and Michael B. Jordan with their families, along with ambassadors Kiko Mizuhara, Jeremy Lin and Yang Zi, the brand's holiday imagery finds strength in togetherness and tradition this season. On the women's side, the campaign centers the brand's downtown New York-inspired Beat Shoulder Bag, and on the men's front, the label's new Hitch backpack and belt bag claim center stage among the famous faces.

Miuccia Prada hand-selected seven legendary women to front Miu Miu's holiday campaign, appropriately tiled, "Miu Miu Icons." In the mix is actress, model and director Chloë Sevigny, Oscar-winner Kim Basinger, English actress Raffey Cassidy, and Chinese model, actress and former ballet dancer Du Juan, each of whom have previously appeared in Miu Miu campaigns. Additionally, Euphoria actress Storm Reid, who debuted on the runway in March at Miu Miu's Fall 2020 presentation, The Crown actress Emma Corrin, and singer-songwriter and actress Jordan Kristine Seamón who appears in We Are Who We Are alongside Sevigny, make their debut.