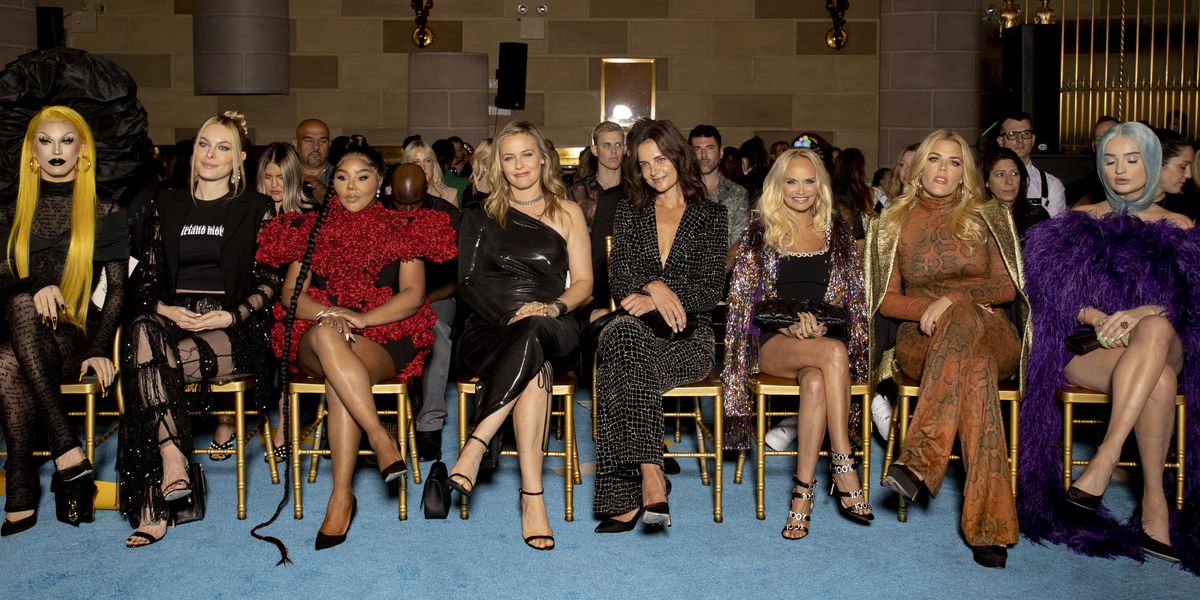 The Love Affair Between Celebs and Christian Siriano Keeps Growing

There are some things you know you're always going to get at a Christian Siriano show: dramatic gowns, Coco Rocha walking the runway and a jam-packed celeb-filled FROW, usually with names like Heidi Klum (his former Project Runway judge) and a screaming Leslie Jones.

But while there were certainly some of his signature sculptural gowns with giant ruffles at last night's Spring 2022 show, there was also a rather unexpected mix of tailoring throughout (his suits veer toward the neon variety). Rocha was also present, but she traded the catwalk for a seat this time around. Klum and Jones weren't there, but the front row was still quite the serve nonetheless.

The cameras instantly swarmed around Katie Holmes, Lil' Kim, Busy Philipps, Kristin Chenoweth and Alicia Silverstone, who were all joined by pop girlies Slayyyter and Kim Petras, and reality stars Leah McSweeney and Christine Quinn. Oh, and MARINA performed some bops throughout the show. Indeed, there's never any shortage of star power at Siriano's shows, perhaps due to his ubiquity on the red carpet. (Industry insiders say many of his front row guests are real clients.)

It's almost enough to overshadow his collection, which was shown at Gotham Hall in Manhattan, and in some ways, it did. While there were several show-stopping turns and reveals (Precious Lee is always a delight to watch), the energy of the room felt more intoxicating than, say, the some of the diamond cutouts in his sheath dresses or the placement of the aforementioned ruffles.

But Siriano's clients aren't your average wallflower, and many of the big names sitting front row are sure to put it their requests in the coming weeks. While some seasons are noticeably more stronger than others, there's a constant romantic sensibility that's a big draw for many women wanting to feel like a princess.

"I was inspired by the Italian women in my life," he said in the show notes. "The old photographs of my grandmother in the 60's and 70's on holiday in Positano wearing her apricot orange dress inspired an Italian coastal collection filled with color and joy. I wanted it to feel powerful and strong but also romantic like any true Italian woman." It could also be said that he's inspired by the VIP guests who turned out to support him last night, something not everyone can say as much.