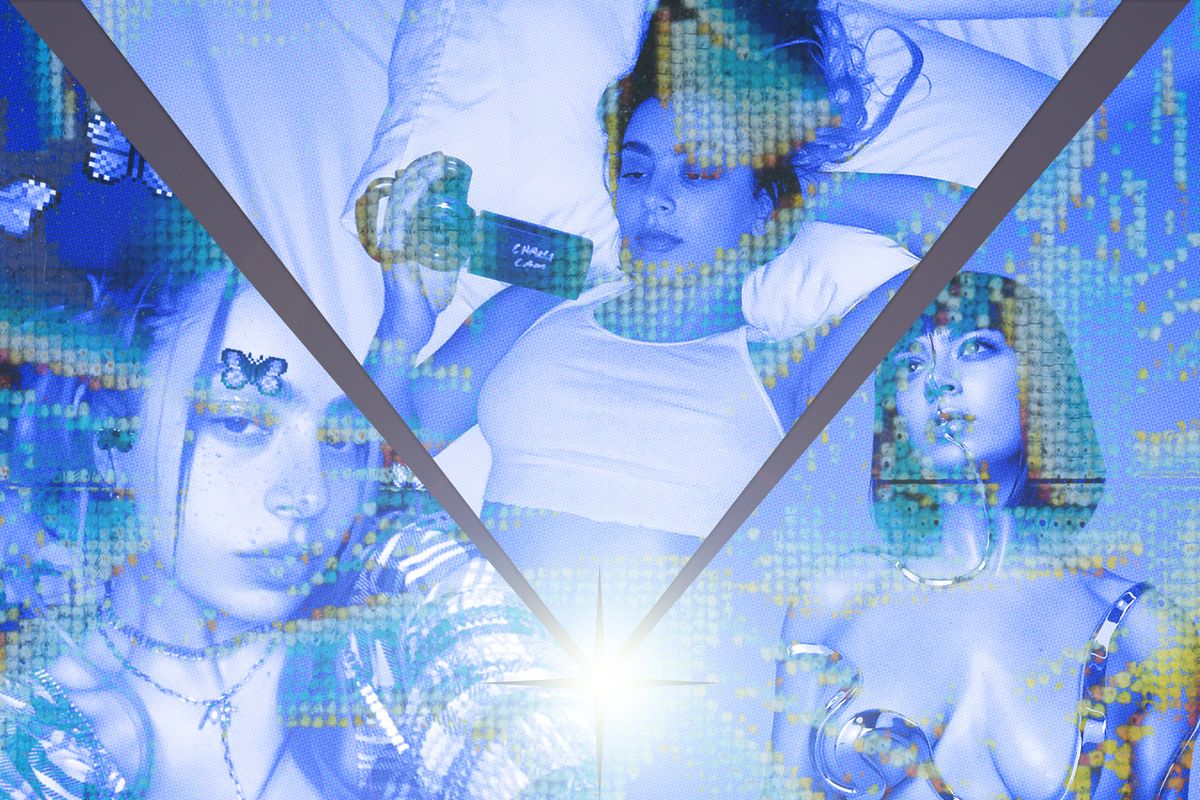 A few years ago, one specific term started hanging around descriptions of Charli XCX's music: futuristic. When her SOPHIE-produced Vroom Vroom EP dropped in 2016, it felt as if critical consensus had been reached overnight — this music was, supposedly, what the pop records of coming decades or centuries will sound like, and Charli was a star prophetic enough to beam these sounds into the 2010s. Since Vroom Vroom, fans and critics have latched onto this descriptor, and heaped it upon her fawningly with each successive release: a recent profile decrees that Charli is "pop's reigning futurist;" The Guardian lauds her "mischievous futurist agenda." A subsection of Spotify called "Hyperpop aka the future" features a cohort of artists adjacent to Charli — Slayyyter, A. G. Cook, gupi, 100 gecs, Caroline Polachek, Hannah Diamond, Kim Petras.

It's not hard to see how the "futurism" label stuck. When Cook, SOPHIE and their PC Music compatriots debuted a new mode of glossy pop music in 2013, there were few words to describe it: loud, sure; strange, absolutely. Shiny and uncanny, seemingly against nature, it appeared to foreshadow new and weird ways of communicating. What was this music, if not futuristic? When Charli named her Cook-produced 2017 mixtape Pop 2 — as in, a sequel to pop itself — it felt like the term was carved in stone. Charli did predict pop's trajectory for the next two years: 2019 saw the release of her much-awaited third album, as well as critically lauded releases from Polachek, Slayyyter, 100 gecs, and Diamond that solidified those industrial whirrs and abrasive shrieks as signifiers of the pop's new guard.. When you're declaring that a certain scene is decades ahead of the pack, the headlines write themselves. (I have been as guilty of using these "futurism" cliches as anyone else.)

Camp, outsized visions of the future in pop culture are nothing new; the futurists of the early 20th century glorified a new world order where technology eradicated the organic, while The Jetsons planted ideas of flying cars and quirky aliens in the minds of baby boomers. Describing synthpop as futuristic has been a hallmark of the genre since its inception; computer music has always tended to confound critics. To me, though, there's something jarring about classing the current wave of Charli-adjacent pop as futurist, in large part because it sounds so much like the crushing, industrial present. It absorbs the clamor of our current moment — the clatter of factories, the constant buzz of gentrification-inducing construction, the crush of landfill — and warps it. Perhaps PC Music copped the "futuristic" tag because it actually did sound futuristic. Or maybe the alternative was just a little too upsetting to comprehend: that this music, born in the same era as sanitized steel condominium towers and smartphone-induced disconnection, was actually an all-too-real reflection of our current state. Each era gets the pop aesthetic it deserves — excessive grandeur in the accelerationist '80s, corporatized rebellion in the '90s, and so on — so it's fitting that the late 2010s and early 2020s gets a sound nihilistically steeped in the worst byproducts of disaster capitalism: isolation and discontent, incessant noise, the gradual dehumanization and degradation of voices of authority.

This sounds like a dismissal of an entire, increasingly popular, scene, but it's not: It's vital that these artists dismantle the sounds of the present. There's a reason that the past few years have been so obsessed with pop nostalgia: it's much easier to throw back to the sounds of the '90s than grapple with the lot we were dealt. At its best, this music can find an inherent humanity in the soulless black mirror; songs like Charli's "Thoughts" and Hannah Diamond's "Attachment" articulate a deep, spiritual sense of Gen Z disconnection that's so rarely articulated. If anything, it is a disservice to these artists to call what they do "futurism," when it more ably typifies the early 21st century than anything else in recent memory. The most raucous artists among this scene, like Slayyyter and 100 gecs, push the form to absurdist limits, creating chaotic and unwieldy party tracks that harness our common experience of constant overstimulation. Charli's latest record how i'm feeling now, out today, further platforms the raw humanity in her work, choosing to zero in on genuine true love — often just an unattainable symbol in much of this music — as opposed to sadness or the emptiness of the void. Made entirely in quarantine, it's an exemplary display of what can be achieved in the face of even the most depressing and constricting conditions.

Wouldn't it be depressing if this actually were the sound of the future? The Jetsons and the Pet Shop Boys predicted a bright, utopian 21st century; it's a very different prospect to suggest that the chaos of our current world will get harsher, colder and more abrasive. The fact that so many are so willing to immediately cop to Charli, Cook and co. as prophets speaks to how many of us see the world: as a declining enterprise, as opposed to something that could, theoretically, become warmer and more communal.

Certain pockets of culture do predict or push towards a less Amazon-ified future. Weyes Blood's 2019 record Titanic Rising was an impassioned plea for humanity to move away from the disconnected state created by neoliberal capitalism and towards a world fueled by love and compassion. Lulu Wang's film The Farewell asked viewers to consider a world in which the needs of the community were put above the needs of the individual, while Ari Aster's so-called horror film Midsommar contemplated a social model where pain is shared, rather than internalized or weaponized. I am thrilled that 2019 sounded like Charli's Troye Sivan collaboration "2099," with its rumbling sub-bass and spaceship synths. I hope, for our own sake, that the year 2099 sounds very different.