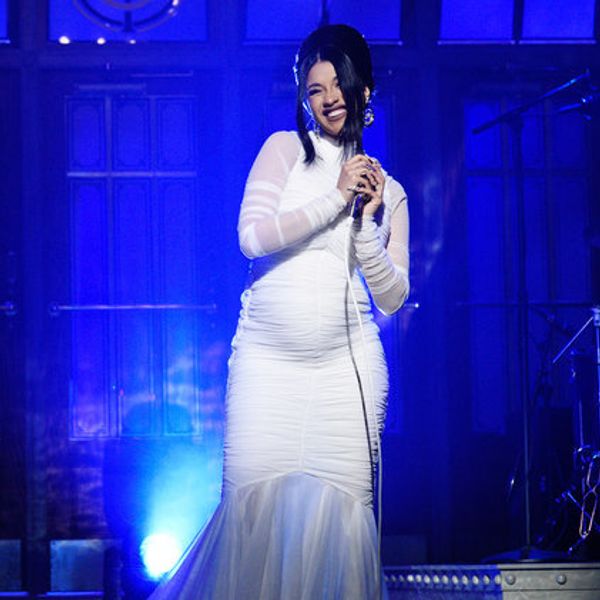 A little over two months ago, PAPER published "Cardi B is Just Fat, Okay?," documenting the rapper's response to speculation she was pregnant with the child of fellow artist and fiancé, Offset. She addressed fans just four days after Kylie Jenner gave birth to her baby, Stormi Webster — a pregnancy she opted to keep secret, saying "No b**ch I'm just getting fat. Let me fat in peace." Cardi B has now revealed she is, in fact, pregnant, and why she also chose to deny rumors.

While she spent the last few months donning puffy pieces and being shot from the chest up, but chose to wear a white, fitted mermaid gown by Christian Siriano in her appearance on SNL this weekend. Cardi B followed up on her performance with a now-deleted statement posted to her Instagram story, in which she explained why she didn't make the announcement sooner.

"This is why i did not wanted to say nothing," Cardi wrote in the post. "People be so thirsty to scrutinize and try to destroy something that itsuppose to be a blessing."

The story disappeared shortly after it was posted, but she's not wrong. Many have been thirsty, just as they were with Jenner, to know if a enormously successful young woman at the height of her career might be having a child. TMZ, in particular, has been there to regularly document any developments — claiming Cardi B's baby is due in July long before her announcement.

Now we need to let Cardi B pregnant in peace.