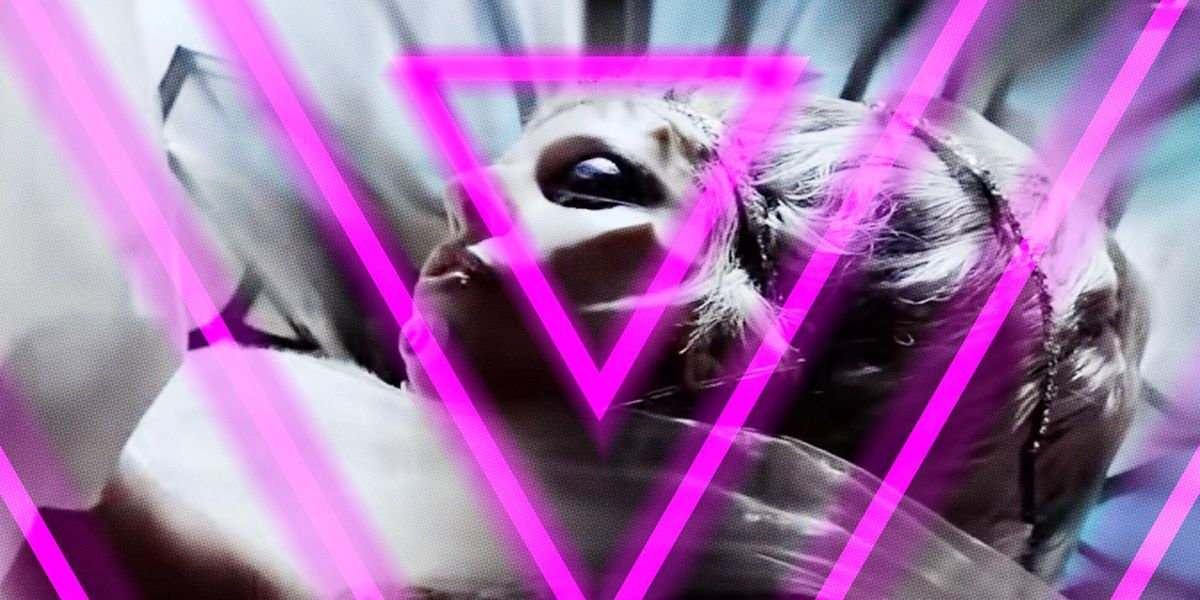 The Psychedelic Subversion of Gaga's 'Born This Way' Video

Somewhere deep in the sky, perched on a crystal throne, Lady Gaga gives birth to herself. A double-faced deity with her hair swept into a beehive, a third eye gazing from her chin, she pushes out filmy replicas of her own head, their milky eyes already ringed in blue, dripping slime. Her attendants line up the heads in an open-air factory; one of them, in the center of the frame, awakens and blinks at her dormant siblings.

This, Gaga's narration tells us, is the birth of a new race, one without prejudice. Elsewhere in the uterus-shaped star cluster, Gaga lets her hair down, throws on a patent leather jacket and a pair of goat-hoof heels, draws a machine gun from her vagina and sprays bullets at the frame.

All of this happens before the music rings out, while Gaga's voice, speaking, is still fixed in prologue. She had by 2011 earned enough of her viewers' trust to break into such a fantastical origin story without conceding so much as a hook. The videos that accompanied her previous records, 2008's The Fame and its 2009 appendage The Fame Monster, offered a glut of miraculous and unsettling images. From her first smash singles "Just Dance" and "Poker Face," Gaga followed in the rich MTV tradition of starring in visuals whose metanarratives lifted off from the lyrics. Songs like "Bad Romance" and "Alejandro" cycled through the rote internal conflict of wanting, and then abandoning, a love that's no good for you. Their videos, by contrast, cast Gaga in a prismatic array of roles, exploring dominance, taboo and monstrosity.

With the video accompanying "Born This Way," the title track and lead single from her second album, Gaga furthered her reputation as a shapeshifter drawing viewers into discomfiting universes. Mutants swarm the screen in a borderless void; Gaga's body splits off into kaleidoscopic shards, not a stable object but an ecosystem unto itself. All the while she sings vaguely of self-love, tenacity and optimism. Her words trace a world where all adversity fades in the light of benign affirmation. Her images tear that simplistic view apart.

Gaga has always had an unstable screen presence. In the "Bad Romance" video, she plays a curly-haired cherub with enlarged anime eyes, a scrawny, elongated demon that looks like a feminized version of the creature in Aphex Twin's "Come to Daddy" video, and a femme fatale draped in furs who sets her lover on fire. In other videos, she has easily assumed characters like a lustful nun hooded in latex, a blunt-banged cyborg, a murderous Minnie Mouse. Her visual elasticity must have played into the rumors that abounded early in her career that she was transgender or intersex, as if no woman who made such grotesqueries of herself could be normatively sexed. The gaze that fell on Gaga grasped her excess and projected it onto her imagined genitals, which she went on to spotlight, in a new video, in body-dissolving abstraction.

For "Born This Way"'s video, Gaga doubled down on the fake. The song itself, a revved-up anthem driven by acid-eaten synthesizer chords, lyrically skims the surface of a self-empowerment mantra: We're all born the way we are, rooted in our inevitable particularities, and so the only challenge we face is to love ourselves, at which point we've won. At the time, the larger "born this way" narrative — the idea that queer people don't choose their deviancy, but tumble out wrong and are stuck with it — fed a certain moderate concession in the fight for gay marriage, then the most visible and best-funded struggle in the larger push for LGBTQ+ rights (days before Gaga's video was uploaded to YouTube, President Obama declared the Defense of Marriage act unconstitutional). If gay people could not rewire themselves to be straight, if they were born in their orientation, then it was cruel to deny them the pleasures and benefits of legal, loving marriage.

The "born this way" argument represented a significant failure of imagination among the most mainstream and milquetoast LGBTQ+ activists of the time. Why, after all, would it matter if people chose to be queer? Why lock queerness into a story of unfortunate inevitability, something that would be great to avoid if at all possible but, so sorry, we happen to be trapped here? The bulk of "Born This Way's" lyrics, which also clumsily flip through a roster of racial and national identities, including a pair of historically charged and unexamined terms, feeds this defeatist way of thinking. The video, thankfully, breaks from it entirely.

If the freakish among us were born to be freaks, we continue to be born every time we create ourselves, every moment we choose what we are.

Directed by the British fashion photographer Nick Knight, whose only previous music video credit was Björk's astonishingly intimate "Pagan Poetry," "Born This Way" sets Gaga's mutant body loose in an undifferentiated void. The stark lighting and encompassing darkness recalls the smoky erotics of '80s blockbuster videos like Madonna's "Express Yourself" (from which "Born This Way" has been accused of borrowing its verse melody) and Michael Jackson's "Thriller." Like Jackson's iconic zombie, Gaga's face and body — already mutable visions throughout her videography — pop up all wrong. Horns seem to stretch under her skin at her forehead, cheeks and shoulders, as if she were about to sprout thorns. She's covered in her own tattoos, the only things that ground her in a continuous physical presence video-to-video, and then those of her more heavily inked co-star Rick Genest, known as Zombie Boy.

Gaga's dermal prosthetics and Genest's full-body tattoos split from the naturalness and inevitability foregrounded in the song's lyrics. In the world of the video, Mother Monster and her children, dancers also marked by incipient thorns, revel in the mutations they have chosen for themselves. The video's prologue offers a clue to its metatext. The darkly psychedelic birth witnessed in its first two minutes, Gaga says, "was not finite. It was infinite." If the freakish among us were born to be freaks, we continue to be born every time we create ourselves, every moment we choose what we are. The birth and the way it makes are endlessly renewing, never set.

Shards of "Born This Way" have ricocheted among subsequent music videos in the decade since its release, including in those accompanying music by trans artists. SOPHIE's cheek prosthetics and Arca's cyborg satyr legs carry a hint of Gaga in their fusion of the body and its trappings, the construction of the artist's image from disparate, conflicting parts. The idea of giving birth to yourself using whatever materials are at hand has a certain trans logic, as does the image of the biomechanical cyborg that became one of Gaga's Born This Way-era staples.

In its visceral collage, the "Born This Way" video still thrills; its imagery seizes and illuminates the only fractions of the song's lyrics worth transcribing: "born to be brave," "born to survive." At the bridge, as the story rolls to a close, Gaga lolls with her monstrous children in a pool of variegated slime, their bodies tangling with each other in intimate communion. If the world below says we're freaks, then let's be freaks in space together, the image suggests. Let's find the place where our bodies, unconstrained, start to sing.