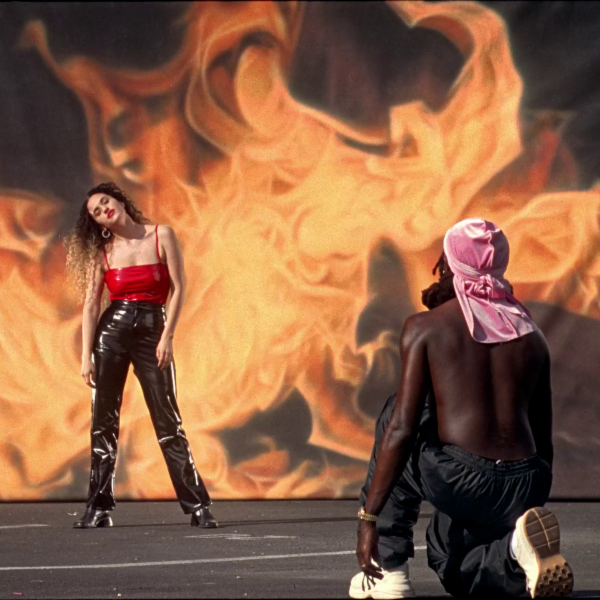 For Dev Hynes' latest Blood Orange music video from last year's Negro Swan, he brings out the big guns. In the allegorical clip, which Hynes directed, he recruits the song's featured artists Diddy and Tei Shi, while also adding A$AP Rocky, Empress Of, Tyler, the Creator, Alton Mason, and Dominique to the mix. Together, they appear in a series of poetic scenes that juxtapose surreal elements and gritty slice-of-life shots.

The video opens with a leopard-coat wearing Dominique yelling at a man who apparently is no good. There are shots of men running downhill in a forest, and a set-up of Tei Shi, wearing crushed powder-blue velour, who sings the track's somberly addictive hook: "Is this the way that you are?" Hynes is on a bike, acting as a conduit for which the video's themes can be expressed.

Later, he plays piano maestro, in a beret and tuxe, as dancers form a corps line leading to him. He runs through the streets at night, and crouches in worship before Empress Of, who stands in front of a mural of flames clad in red and black vinyl. In another scene, A$AP Rocky wears a bandanna and wordlessly flips off the camera. Diddy writes and reflects in the studio. The song features a vocal track of him speaking, "What's it going take for me to be loved how I want to be loved?" This question is so poignant, it almost feels like the video's thesis.

Blood Orange on Instagram: “HOPE feat. @diddy & @teishi DIRECTED & EDITED BY ME. PRODUCED BY @elarapictures OUT TOMORROW 🔥 on @applemusic”

Perhaps one of the most striking scenes involves fashion darling Alton Mason, who dances fluidly in white before a bright red background. The choreography throughout the video is by Emma Portner. Nothing is quite like seeing "Hope" for yourself, though. Watch the full thing here, exclusively through Apple Music, and revisit Negro Swan, below.