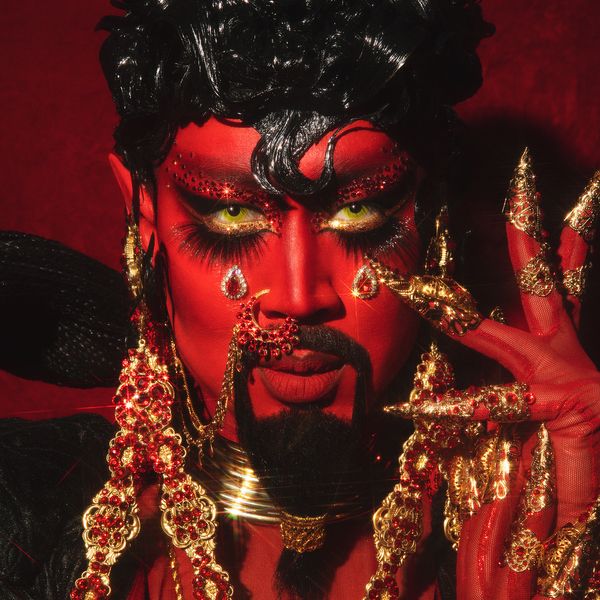 When it comes to Halloween, celebrities never hold back. From Heidi Klum who dressed up as a Zombie to Halsey as Marilyn Manson, this year has already seen some pretty outrageous costumes. But behind the crazy and experimental looks is almost always the creative genius of makeup artists and designers who put it all together.

If there's one name synonymous with insane celebrity transformations, it's Los Angeles-based Anthony Nguyen. The makeup artist, whose work spans the likes of Katy Perry, Adele, Jessie J and Cindy Crawford, can also be routinely seen whipping up dramatic looks across his Instagram, often experimenting on himself.

For Crawford's "Casamingo" Halloween look this year, which she shared on Instagram, Nguyen was influenced by the past. "[Cindy Crawford] was attending a 'Psychedelic'-themed party this year, so my inspiration for her makeup was psychedelic paintings from the '60s," he says. "I then incorporated those graphic elements and colors into the makeup."

But Nguyen doesn't limit himself to just celebrities. For his latest project, he transformed into "Jafar, the Evil Genie," inspired by Disney's Aladdin, as part of his "on-going theme" where for several years, he has created "mashups of Disney villains," reinterpreting them "in a conceptual and high-fashion light."

Created in collaboration with photographer Brian Ziff, Nguyen also put together an entire photoshoot capturing his look. Talking with PAPER, the artist breaks down how he created the craziest celebrity halloween looks and what inspired his own transformation.

What inspired this year's Halloween look?

I've had an ongoing theme for several years doing a mashup of Disney villains, but reinterpreting it in a conceptual and high-fashion light. This year I decided to be Jafar from Disney's Aladdin because Jafar's character as an evil genie is often forgotten about. I wanted to have fun with the makeup with his fire red complexion and revamp his costume. For the Halloween process, I always start by watching the film again while sketching several versions of the costume and makeup on paper.

I also get inspred by couture designers and mix elements from my club kid days, but still try to keep key qualities that make Jafar recognizable, such as having a genie lamp, high pony tail, and strong pointed shoulder pads. Jafar also infamously transforms into a snake in the film, so I wanted to incorporate that theme by having my wig ponytail made into a black snake (made brilliantly by hair artist Larry Dean McDaniel) — that was my favorite touch. To bring this whole costume together, I gathered a team of talented artists to bring my vision to life.

How did you end up creating the photoshoot?

I wanted to capture Jafar in a gothic, dark, smokey, and editorial way. So my brilliant photographer friend Brian Ziff was the perfect artist to collaborate with to capture the mood.

What products did you use?

I like to sketch different versions of my makeup on paper with colored pencils, and then set a day fully aside to do test runs to see which products and placements work best. For my Jafar look, some of the key products I used were MAC Acrylic Paints to create my red complexion, Lemonhead LA glitters, and lots of Swarovski crystals.

What're some of the craziest Halloween costumes for this season?

This year has had a lot of iconic characters in theaters, so some of the craziest looks this season has been reinterpretations of Maleficent, the Joker, and IT.

"Halloween is one of the only time of year I get to switch roles and have myself as the muse."

Talk about the looks you're creating for Cindy Crawford, Christina Aguleira, and Adele.

Cindy Crawford was attending a 'Psychedelic'-themed party this year, so my inspiration for her makeup was psychedelic paintings from the '60s. I then incorporated those graphic elements and colors into the makeup. Adele and Christina Aguilera's makeup is still TBD and we will all collaborate on ideas the night of, but let's just say we're definitely going bold and glamorous.

Overall, what drives you to create the truly insane looks?

I love all forms of art and have dabbled in theater, painting, sketching, and designing. Halloween is one of the only time of year I get to practice all of that, switch roles, and have myself as the muse.