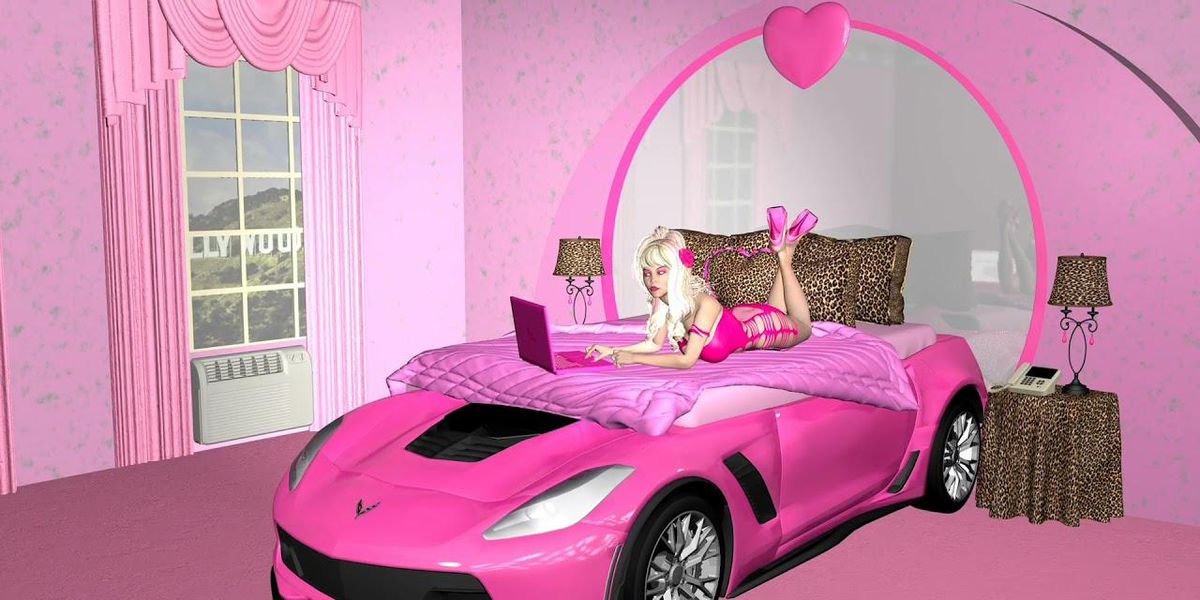 It's no secret that Angelyne's always been ahead of everyone else, whether we're talking about her early embrace of maximalist glamour or the fact that she's commonly referred to as the "original influencer." And though the LA legend may be best known for the famed vanity billboards that skyrocketed her to pop culture notoriety in the mid-'80s, the multi-faceted artist was also a pioneer at harnessing the power of the internet back in 1996 via virtual tours of her favorite LA haunts.

And now, the "Goddess of Cyberspace" is doing it yet again with a fabulous "desktop glamour kit" sold as an NFT (non-fungible token), AKA the hottest new way to give online art buyers proof of exclusive ownership rights by recording the sale through a secure, non-duplicable blockchain.

Created in conjunction with LA-based internet artist Lizzie Klein, the bundle — appropriately dubbed "AngelyneSexyVirginCursor.cur" — is Angelyne's first foray into digital merch, consisting of a desktop background, customized app and folder icons, as well as an animated cursor that features the instantly recognizable bombshell atop her iconic pink Corvette.

"We came up with the idea for the cursor and desktop customization kit because we believe everyone should browse glamorously! Even the boys!," Klein said over email. "We like things to be pretty so we made this so everyone's computer desktops could be pretty like ours."

After all, as Klein notes that websites "used to be so cute and have so much charm" before the modern era of minimalist interfaces — something which ultimately inspired them to create the PNG cursor to replace "the drab little black arrow." And while the file itself can be downloaded and installed by anyone for free, only "one very special person" can cash in their Ethereum to become the sole owner of the first custom cursor ever minted as an NFT.

"Angelyne is already known for hyper customization and selling souvenirs out of her car, so this is a natural next step," Klein continued. "If we are going to spend all of our time on our computers, they should be cute!"

Klein went on to explain that the NFT is all a part of Angelyne's vision for a better internet via Web 3.0, which will allow people to retain their privacy and data by using decentralized technology like cryptocurrency and blockchains. And in essence that means the Facebooks and Googles of the world won't be able to keep profiting off users, thus facilitating a new evolution of the internet reminiscent of what Klein calls "the early web spirit."

"She has never felt excited about big social media platforms because she feels they are homogenizing, aesthetically limiting, and she doesn't like the structure of all of us essentially working for them for free," Klein said. "We believe NFTs will really fuel change in the way we interact with the internet." And as Angelyne herself simply put it, "I own my own. Figure it out everybody!"

Angelyne's NFT will go up for auction today at 12 PM PST via Foundation. Find out more information about the desktop glamour kit, here.