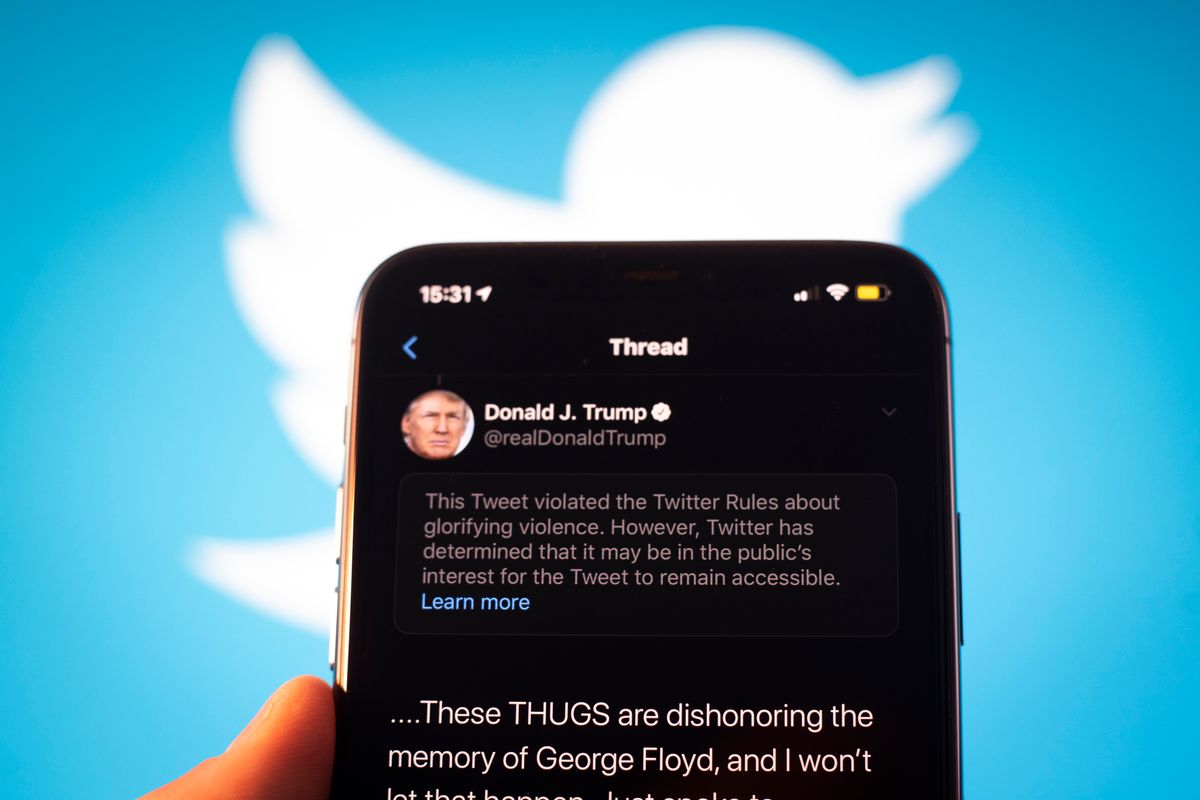 Around 1:00 AM EST on May 29, United States President Donald Trump took to Twitter to criticize Minneapolis leadership's response to the current protests taking place in the wake of George Floyd's death earlier this week. In calling for an end to the looting of businesses, however, Trump not only threatened to send in the National Guard to “get the job done right," but also directly threatened violence against those participating. Twitter swiftly flagged the tweet, stating that it violated Twitter Rules about glorifying violence, but the tweet remains viewable to users.

“These THUGS are dishonoring the memory of George Floyd, and I won't let that happen,” Trump’s since-flagged racist tweet reads in a thread of his rantings. “Any difficulty and we will assume control but, when the looting starts, the shooting starts.”

The very immediate threat of violence against protestors was evident to the people watching Trump's tantrum on social media unfold, and takedown reports sent to Twitter seem to have worked. Although the platform allowed the tweet to remain available for click-through viewing, it attached a message to the original reply and disabled link sharing. The phrase “when the shooting starts, the looting starts" originated when it was first uttered by Miami's police chief, Walter Headley, in 1967 as a racist threat against citizens in the Civil Rights movement.

Related | A Black EMT Was Shot by Police in Her Home

“This Tweet violated the Twitter Rules about glorifying violence. However, Twitter has determined that it may be in the public's interest for the Tweet to remain accessible," the warning message reads attached to Trump's tweet. His reaction to having his tweet flagged was, expectedly, not happy — he took aim directly at the company this morning and vowed to enforce an executive order signed yesterday to expand social companies' liability for its users' postings under Section 230 of the Communications Decency Act.

The President did not glorify violence. He clearly condemned it. @Jack and Twitter's biased, bad-faith "fact-check… https://t.co/whlIrqrNZ0
— The White House (@The White House)1590762017.0

Once Trump realized his tweet was only available for limited viewing to the public, The White House's official Twitter account reposted the original message — and then also got flagged for violent speech. The account, which now appears to be as much a mouthpiece for Trump's tirades as his personal account, calls for Twitter to be deemed a publisher and thus sacrifice its Section 230 immunity.