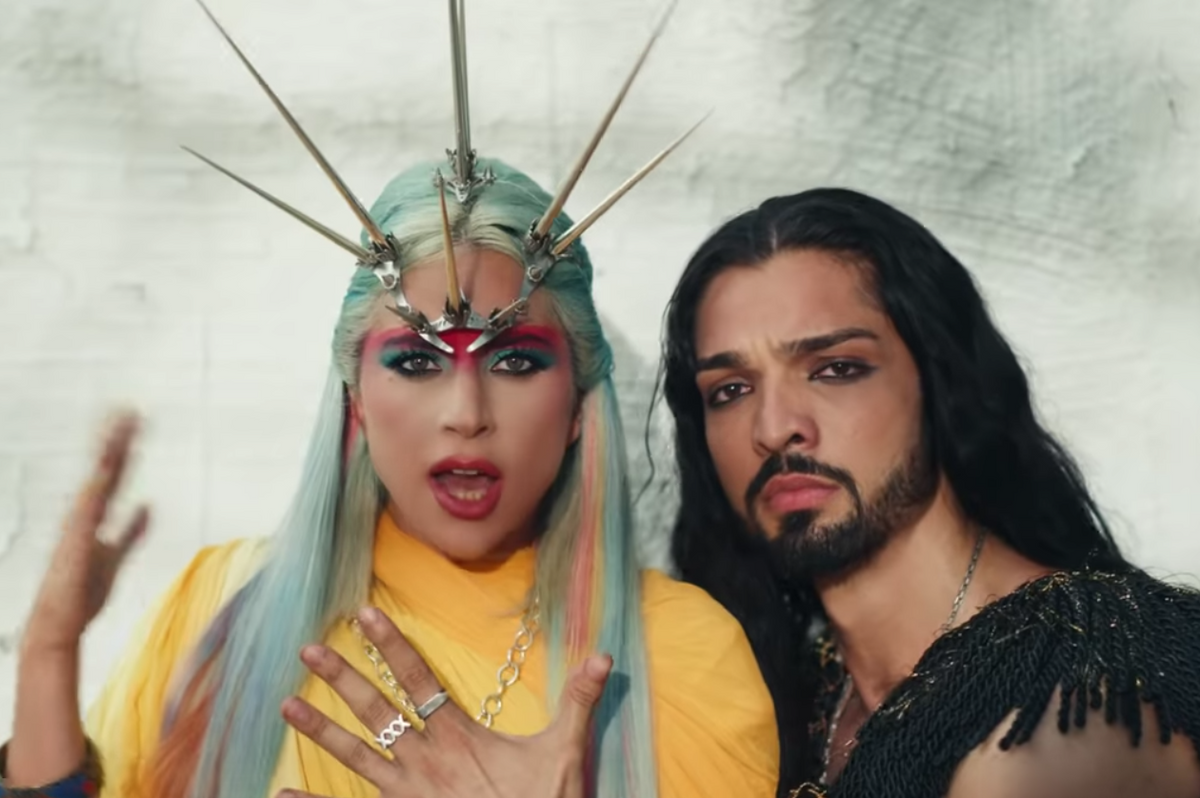 Make way for another addition to the pantheon of Lady Gaga's video boys. Joining the ranks of Alexander Skarsgård ("Paparazzi"), Jurij Bradač ("Bad Romance"), Tyrese ("Telephone"), Rick Genest ("Born This Way"), Norman Reedus and Rick Gonzalez ("Judas") and Taylor Kinney ("You & I") is Sia Zami, who stars opposite the Italian girl from New York in her latest video for "911." It's the third single off her critically acclaimed sixth studio album Chromatica.

The video, directed by The Cell's Tarsem Singh (his first music video in over 25 years), is largely inspired by Armenian director Sergei Parajanov's 1969 Soviet art film The Color of Pomegranates (the film's poster appears on the street scene at the end of the video) and features Gaga in a Wizard of Oz-like scenario in which she hallucinates a false reality before being awoken by paramedics at which time she (and the viewer) learn that she was knocked unconscious in a car-bicycle accident. Zami plays both her guide during her hallucination and then a paramedic when we flash forward to reality.

With his biggest break to date now in the rear-view, we chat with the actor/model about his career path, filming a music video in a pandemic, whether he's been to the planet Chromatica, and why Gaga smells like burnt toast.

Tell me about your early life growing up in Iran, Dubai and California. What did living in three very different places teach you about the world?

I can't imagine three countries that are more different from each other, but I learned even the most seemingly different people can share more similarities than you would expect. As an artist/actor, empathy is crucial to my work, the constant pursuit of trying to understand people and how they think or behave as opposed to just judging them from a distance, is something I continue to work on in my daily life. In the real world, I think that made me be a kinder person to the people around me. This also shaped most of my world views. I firmly believe that with more empathy, this world will without a doubt become a better place for all living things. I like to think that there was only one soul in the universe and it got very lonely, so it created the universe and time, so it could experience and connect to "other" beings and escape its loneliness. So now constrained by time, each of us can't remember how we're all the same being. We're so different but also the same. It's a blessing and a curse and it's why life is so beautiful.

I read that you knew you wanted to be an actor as early as seven years old. Was there a specific actor or performance that influenced you?

Charlie Chaplin was the first person to inspire me. He made me laugh and cry in the same movie, and as a little boy I was amazed at how powerful stories can be and so I knew I wanted to be a part of that.

When did the modeling come about?

It started in Dubai when I was 16 or so. I didn't quite enjoy my experience with it back then, but it got better... later.

My manager found out about this from my agent. The casting director on this was fantastic and was really pulling for me. Pretty quickly, I got a call from the amazing director, Tarsem Singh, who spoke to me in depth about the whole project. I guess he thought I was the right man for the job.

What was your initial impression of Gaga?

First thought was that she was sweet. When she starts performing, she's just magnificent. It was a privilege to be able to watch her in her element. The freedom, the creativity, it was just so beautiful and captivating.

Have you been to the planet Chromatica?

I certainly would love to think so. I think particularly in times like this where the world presents us with nonstop challenges, it's important to stay true to what makes our hearts beat, to stay pure and feel the strength of being our true selves.

Do you have a favorite Gaga song or album or era?

Ooh. My favorite album is definitely The Fame Monster.

First time I met her, burnt toast, or maybe that was just the onset of the heart attack?!?

Tell me a bit of behind-the-scenes from filming. This is one of the first projects we've seen that was filmed during Covid, so how did that influence your experience?

Everybody had to wear a mask and be six feet apart when we were not shooting. These are strange times but everybody did their part for everyone's safety. It was also 115 degrees one of the days, with a mask on. Yikes!

We've read Gaga's perspective on the story of the video. What do you see as the message of the song in the context of the video?

The attention to detail in this video is absolutely incredible. With that, there are a lot of hidden and not-so-hidden messages in every single scene. My interpretation: this song is about the journey one takes to heal oneself. That requires an awakening and a sort of acknowledgment that what we make into the monsters are sometimes actually the help we need and the real monsters are ones that we're more reluctant to face, our own egos.

Inquiring minds want to know: Are you single?

Mmhmm. I bet. What's next for you career-wise?

There are a couple feature scripts I am reading right now. I got really close for the feature, Legend of Sinbad, being directed by the fantastic Frank Coraci. That story in particular and what the character goes through, resonates so deeply with the life I've led so far. I really hope I get to be a part of telling that incredible story.

I noticed that the official Witcher account welcomed you to the family after seeing you wearing a Witcher necklace in the video. How did this necklace find its way into the video and did you have any inclination this would blow up as it did on Twitter?

I'm obsessed with Witcher. I've read all the books multiple times, played all the games multiple times and I've seen every episode multiple times. So when I showed up for the fitting, I was wearing my medallion and they seemed to really dig it. I brought it to set and honestly didn't know what was going to happen, but anything Witcher-related is a W in my book!