Since its inception, the internet (and, by extension, social media) has been hailed as a tool of the revolution — something that democratizes information and allows for unfettered access to varying perspectives. However, in the past few years, things like influencer culture and advertising have made the online sphere become increasingly tied to monetization which, in turn, has fostered a level of dishonesty and inauthenticity. That said, a new "post-capitalist network" known as New Life AI is here to change that all.

The brainchild of Vector Newman, New Life seeks to facilitate the exposure of authentic cultural capital — completely isolated from the influences of advertisers or external interests. Utilizing a form of value that "combines the virtues of cryptocurrency with the virtues of redistribution," New Life doesn't incentivize users with a currency based on a consumable resource, like Bitcoin's reliance on computing power. Instead, New Life's currency is about creating a way of promoting your creative output in a quantifiable way that has the potential to speak to and "educate the corporate world."

A nebulous concept, indeed, but in order to understand how it works, we need to explain how New Life came about. Noticing that "social media is completely aligned with the way industrialism works" — in the sense that what matters to tech giants is the amount of users and engagement rather than intent or purpose — Newman's goal was to create a platform that measured the kind of meaningful social capital valued by some of the internet's most in-the-know and interconnected artistic groups.

"Aesthetics drive brilliance in the economy, but it's kind of a taboo topic that no one in the financial sector will talk about."

"Aesthetics drive brilliance in the economy, but it's kind of a taboo topic that no one in the financial sector will talk about," he explains. "We want to create the kind of value that is not tangible, not recognized by the economy." As such, New Life operates under a model that values quality over quantity — one that "isn't about how many people follow you," but about who. As an example of this, Newman points toward the difference in the way the subculture-driven creative world interacts with public figures like Beyoncé versus people like Arca. 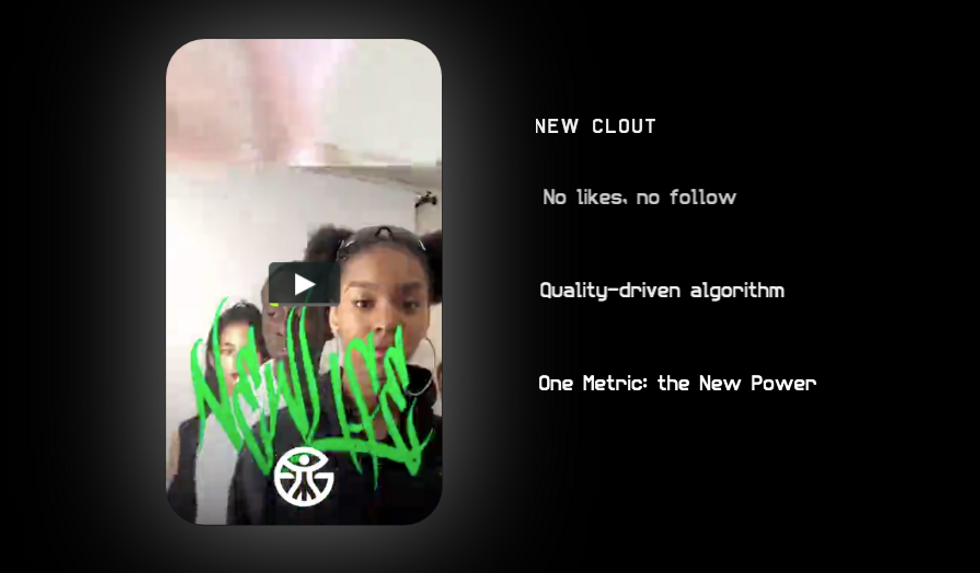 And though his argument surrounding Beyoncé's cultural capital is a somewhat trickier than if we were looking at something such as, say, Miley Cyrus, Newman's point remains. After all, if we were to compare Cyrus' artistic innovation with Arca's cultural contributions, it becomes obvious that "no one is actually looking at things [through the lens of actual cultural impact]."

"Aesthetics and all this stuff is very secondary stuff to investors, they don't really understand logic, they just see its growing," he adds. "They don't talk to designers. The market [as-is] doesn't care about the vision of designers and creators." And it's New Life's mission to redistribute this power — to "allow the people who actually participate in the collective creation of aesthetics to get some value back."

"We are really focused on the new aesthetics economy, which attaches economic value to competence in terms of creation and curation."

So in a world where only celebrities and big brands make money from relatively shallow metrics, New Life prioritizes a different sort of "engagement" — one that rewards "exposure relies on level of competence of user rather than number of users, which can be [altered]," per Newman.

Rather than using quantitative metrics such as page views, number of users, or user engagement — all tangible, data-driven points that, as we've seen, can easily be gamed — New Life allows users to "vote" on posts highlighting new creative endeavors. Whether it be a new animation, clothing design, or piece of music, all you have to do is hold down the post for an amount of time that correlates to your interest in the piece. The longer you press down, the more credence you give the work — a format that in way forces a more interactive engagement with the work and makes "scrolling through the feed" feel more like a video game of sorts.

"Sometimes on Instagram, they don't even cheat, but they have the kind of user who doesn't interact, they don't create any economic value. They just want to see them everyday, because they are used to it. There's no actual creative value," Newman explains. "We are really focused on the new aesthetics economy, which attaches economic value to competence in terms of creation and curation."

In this way, Newman enjoys the "new Tumblr" comparisons. Not only is New Life much more repost-friendly — unlike Instagram — there's also a "very post-internet vibe" present on the platform, which currently features a hyper-exclusive membership approval model. After all, in Newman's eyes, "a platform that works as a platform that understands the way these communities have to be built." Just look at Instagram's start amongst a "core group of hipsters taking lomography," which obviously expanded to where it is today.

"Today, [you have to be] very niche," he explains. "What works is when you have a strong connection to small group." And in New Life's case, it's all about the up-and-coming creatives with the potential to shift the cultural narrative for years to come.

"Our algorithm establishes clout, which is not the amount of people, because we don't follow industrial logic. We value quality or skill."

"Our algorithm establishes clout, which is not the amount of people, because we don't follow industrial logic. We value quality or skill," Newman says, before explaining the inner workings of their AQ (aka Aesthetics Quotient) measure. "It's a form that intelligence that anyone can have, from anywhere in the world."

In this way, it's a social network that's working to deprioritize the Western, Eurocentric chokehold on the creative world, as the people with "higher aesthetic intelligence whop have the power," don't necessarily have to "just be from New York or London or Paris."

"I see a lot of very creative people who are restricted by means, like funding," Newman says. "We all have rent to pay, so if we cannot find backing for innovation we just comply with existing order."