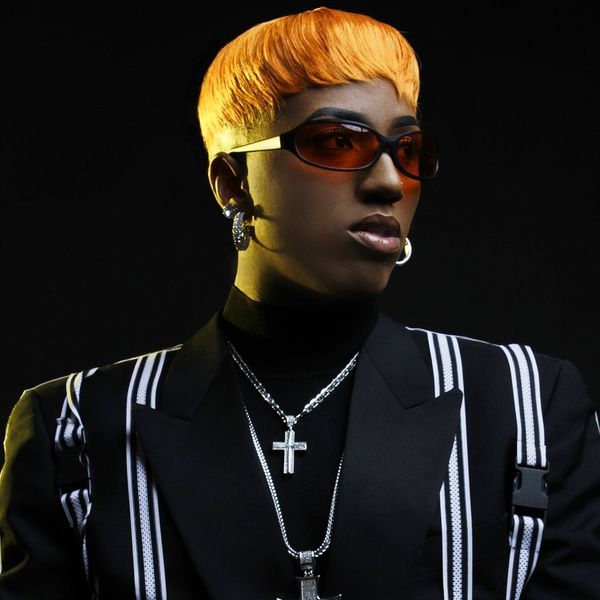 Montre' Wants to be 'Upfront' With You

A Montre' verse is the sonic equivalent of a scathing subtweet, accompanied by a buzzing beat that will leave your ears ringing. His gravely raps are sometimes confrontational, but sometimes comforting; he's got a real voice that cuts clean through looped samples and chopped claps. Upfront, the rapper's new full-length project, stands alone as something thunderous, a threatening stance against haters and a warning to all those opposed to his rise.

Tracks like "Plastic" portray this most vividly, with bars like, "Don't ever come for my androgyny/ 'Cause I walk in my truth/ I be up in these streets," calling for realness in interaction, performance, and self. The rhymes are permanent, pairing well with the lasting impression left by booming instrumentals.

Other highlights on the project include the Charlie and the Chocolate Factory-sampling "Lollypop," a twinkling contrast to the rest of the project. Montre' sounds effortless in his approach, but all at once fantastical, letting listeners in on his world of sticky rhymes and smooth comebacks. "2002" was also an obvious standout since its original release. The track is a dipping, Missy Elliott-sampling trip through the early 2000s.

Despite the numerous samples and thumping bass, Montre' holds his own throughout the project. He's guiding his listeners on a motivational journey on tracks like "Affirmations," but also throwing away doubt and embracing a proud, confident, and zealous attitude on the rest of the project.

PAPER caught up with Montre' about Upfront, his favorite samples and moments on the album, and the relief of finally letting his fans listen to the project in its full, unadulterated glory.

Upfront is a really great project. Can you talk about the inspiration behind the concept as a whole?

This project is really like my diary. I really address topics that have bothered me both personal and professionally. The overall concept and idea kinda came all together at once. Once I started collecting the instrumentals and writing, I started getting this feeling. The whole vibe of the album started to come together. So it was easy to pinpoint the theme and the concept. I've been really feeling early 2000s lately. From the music I listen to, the live shows, the whole energy of that time is really speaking to me and re-inspiring me right now.

You have tons of great verses on the album — do you have a favorite verse or rhyme?

My favorite song I would have to say is "Voicemails." I feel like it will be one of the most impressive lyrically. I really told an interesting story with that song about two long lost friends leaving each other voicemails because they just can't seem to reach each other. Life has taken them in two different directions, but the love has never changed and will never change. From the beat, to the hook, it's just, Hip-Hop!

The project samples some really amazing moments in pop culture. "Pure Imagination," "Work It," the Breakfast Club. What's your favorite sample? What motivates you to sample on this project?

Well, sampling is and has always been a big part of Hip-Hop. I'm glad I definitely kept that alive on this project. My favorite sample actually would have to be my song "In My Bag." It samples a song called "Peaches and Cream" by Monifah. I loved this song back in the day. I don't even know how I found this song because it wasn't even one of her popular songs, but I loved this track. It has that '90s R&B vibe that we love. It also is really important to me because artists like Monifah, unknowingly to them, are very special to me. Their stories inspire me, I have this thing where artists who I feel didn't get their proper shine, or the recognition they deserved, I subconsciously make a decision that I'm going to do it for them. I'm gonna be so big that once I do, I can tell these stories and shed light on these people again because they deserve it, they did it for the culture, and are extremely talented. So that's another reason sampling is big for me, especially that song in particular.

How do you feel getting to release this project into the world after teasing it and releasing "2002" several months ago?

I feel so relieved, anxious, and nervous. Not nervous on whether it's good or not, but just the reception, I guess. Overall, though, I'm excited. It's been several months since the announcement. Had I known that the Red Bull show would have had the impact that it did, I would have released the album then. I had no clue that everything was gonna be taking off like that because after you spend years of working hard to get half back, you just kinda do your job and not expect anything simply because it's not your job to. It's my job to come and deliver as an artist. I'm so ready to hear everyone's reaction, though, so I'm really excited, the live shows are about to be crazy now that I can perform this new music!