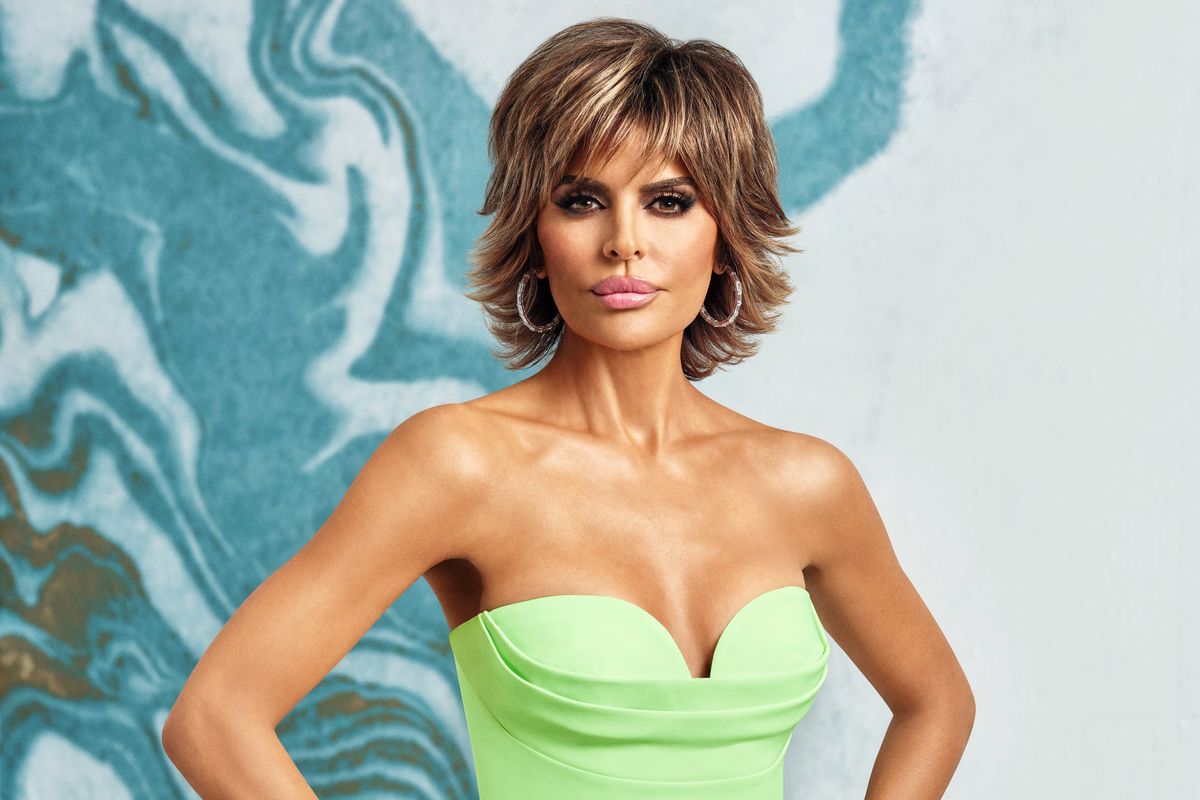 For a franchise filled with wealthy women with access to the best hair and makeup teams in the country, there is no Real Housewife with a look as signature as Lisa Rinna's. The former soap star and current QVC queen is starting her sixth season on The Real Housewives of Beverly Hills this week — the show's 10th — and she remains, as she joked in a confessional last season, "an asshole with iconic hair and big lips." Rinna is as unafraid to speak her mind to her castmates as she is to maintain — and occasionally play with — the style she has become known for.

But her 25-year short, shaggy, highlighted cut wasn't something she developed intentionally. Over the phone from her home in California, Rinna tells PAPER that the style came out of career frustration more than vanity. "I was acting and I couldn't really get a job," she says. "I was really frustrated. My hair was long and I just kept getting close to everything, and I think I had screen tested for seven soap operas. I was in an acting class and one of my acting partners cut their hair off, and it looked really cool." Rinna had just broken up with a boyfriend, and it seemed like the perfect time for a drastic change. "It really came out of that," she says. "There was no premeditated, 'Oh my God, I'm going to create an iconic look.' It was just like, 'Oh my God, I need a job and I need to somehow stand out.'" Two months later, she was cast as Billie on Days of Our Lives, the role that launched her into pop culture decades before she'd become a reality TV star and meme queen.

The main reason she's kept the style for 25 years is how simple it is to live with. "It's so easy... I never even thought about it." The only time Rinna ever went long again was when she had her first child, Delilah, and husband Harry Hamlin encouraged her to grow her hair out "right to my boob, really. I just didn't love it and it was a lot of work. I was like, 'Okay, I did this for you. Now I'm going to cut it again.' I always go back to what's easiest, to be honest, and that's how it has become what it's become, just because I guess I'm lazy."

Lazy is the last thing we'd call Rinna, considering that even in quarantine, she's maintaining her signature style. The actress says that her hair has already grown out considerably while she's been sheltering in place, but the time has come for a touch up, something she's happy to do without the help of a glam team — or at least, with a different glam team than usual.

"I have to color it," she insists. "I've come to the point where I've got to do my roots, so I'm going to get Harry maybe and Delilah to help me do that in the back because I've only colored the front of my hair. I can do my root touch-up, but I can't do the back." While her castmates may be too high-maintenance to do their own touch ups, Rinna already has her DIY beauty routine in the works. For her signature highlights, she ordered Schwarzkopf blonde highlighter to use at home. "I'm going to grab some foil from the kitchen and throw in a few highlights, and we'll be okay."

And if her hair gets too long, she's already prepared to handle it herself. "If I need to cut it, I cut my hair with a Bic razor. I can just razor it a little bit." But of course, she's Lisa Rinna, so she'll have some help. "I'll call Sally Hershberger and do a FaceTime and have her help me trim it. I just haven't really thought about it too much. The roots are the most important."

Rinna's DIY approach to beauty isn't just a result of the global pandemic, it's something she does even when in production for Housewives. If she's filming on a normal day, meeting a castmate for lunch or shopping, she'll do her own hair and makeup, only calling in a glam squad for an event or party. "I've learned a lot over the years," she says. "I've been in this business 31 years, so I've worked with some great hair and makeup people. I just use what works, and I use whatever they use. Joey Maalouf taught me how to contour and highlight, and so I just kind of go back into that. I know how to put a lash on. I'm pretty good by myself."

On days off from filming, she's similarly low maintenance, although she reveals there is one thing she won't leave the house without. "I always have on tinted sunscreen. I get up in the morning and put sunscreen on. Sunscreen is the most important thing because we all know the sun ages you. I do not leave the house without my Ulta tinted sunscreen on." Rinna also relies on Doctor Barbara Sturm's line of beloved (and pricey) skincare products to keep her fresh faced.

On a show where women show up for brunch in designer clothes with full hair and makeup, Rinna may be the most low maintenance housewife — a dichotomy the show seems to be mining this season, as trailers point to a major blow up over castmate Dorit Kemsley being late because of how long it takes her to get glam. While Rinna is tight-lipped over what's to come, she teases that "Beverly Hills can be the most ridiculous. We can be the most ridiculous, and we do not fail when it comes to that and this whole being late and glam squad stuff. It's so funny. That's all I can tell you is you're going to get a good chuckle out of it because people have real feelings about this. It is no joke."

This acknowledgement that the housewives are spending hours getting primped and polished to meet for lunch is part of a larger shift on the show, where the cast is finally breaking the fourth wall and acknowledging that yes, they are on a reality TV show. The last few minutes of Wednesday's season premiere tease drama that has already unfolded in the tabloids about Denise Richards' alleged affair with former Beverly Hills housewife Brandy Glanville. The tension was so great that Richards stopped filming with the other women, an interesting parallel to Lisa Vanderpump's exit from the show last season and something Rinna is excited for the audience to see play out.

"I was just really surprised by it because Denise was one of the ones last year that went to Vanderpump and said, 'You really need to show up. This is a job. You need to be professional. You need to come and be with these women and face them, right?' It's very ironic and it's very pot calling the kettle black because basically Denise says exactly the same thing."

Some viewers might want the show to maintain the glamorous illusion that the housewives are a simply a group of perfectly coiffed women jetting around the world who happen to have a camera crew following them, but Rinna sees this as a larger, necessary shift with how we consume reality TV. "Bottom line, the shows are going to have start breaking the fantasy, which is what we are doing," she insists. "The fans are savvy, and you can't pretend like you're talking about something that you can't really talk about because you can't show the camera men and you can't show the producers. Well, now we're starting to show all that, and I think it's so refreshing and timely. I can be more honest than I've ever been, and you know me, I like to be flat out honest, brutal or not."

Like her iconic look, one thing that has remained unchanged throughout her tenure on RHOBH is her brutal honestly and willingness to be in on the joke. "I just really don't care what anybody thinks or says to be honest, so I just say whatever I feel and then people tend to jump on the wagon. I don't do anything to please anyone or make anybody like me anymore. I just do what I do. If it tends to get a play or a meme or go viral, it's just because I'm just saying how I feel at any moment. There's no precalculation going on."

Being in on the joke means being able to laugh at herself, especially when it comes to her iconic hair and big lips. "I've had these lips for a long, long time," Rinna says. "As I've said before, these lips have their own career. I just laugh at the whole thing... I'll be the first one to make fun of myself, and I like that. I am the one that's laughing all the way to the bank."