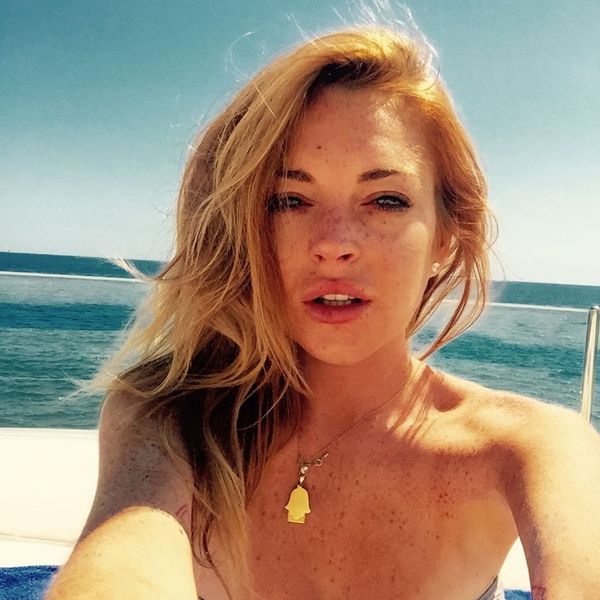 For longtime stans of Lindsay Lohan's music, this is a glorious time to be alive. Earlier this month on Instagram, the unsung pop queen teased a new song snippet the internet is calling "I Don't Like the Parties In LA," and fans are pretty much losing their shit over her imminent return.

However, on The Kris Fade Show on Virgin Radio Dubai, Lohan's home in recent years, a newer, more extended teaser was premiered. The song, her first single since 2008's "Bossy," is actually called "Xanax" and show host Fade explained that the song is about "anxiety and pressure and taking care of yourself."

Lohan's delightfully raspy cigarette voice is put to good use atop a sexy, sparse club beat. Lyrics include: "I try to stay away from you, but you get me high/ Only person in this town that I like."

This all follows recent news that Lohan has been hard at work on new music. When your MTV show gets unexpectedly cancelled (I wasn't expecting this), it is important to stay busy. Lohan has all but publicly said herself that she is coming for all necks, which is great news because "Rumors" still slaps but cannot endureth forever. The gays don't feed themselves. Though, her current stint yelling at Australian celebs on The Masked Singer goes a long way.

In a tweet thread earlier last week, Los-Angeles-based pop singer and songwriter Jesse Saint John — who co-wrote Lizzo's "Truth Hurts," among other major songs — confirmed that he maaaaybe has something to do with writing the song making the rounds online. That has us screaming for a few reasons: writing Lindsay Lohan's comeback is super on-brand for Saint John, who has also written for torch-bearing Camp icons ranging from Brooke Candy and Erika Jayne to Aquaria.

Lest we forget, Lohan is also a patron saint of queer iconography. Her unplaceable "Turkish" accent, which she then monetized for charity. Her Fornarina campaign/accidental smash. Her stint with lesbianism in LA. That live American Music Awards "Edge of Seventeen" performance, where she stopped singing live after 10 seconds and her background singers took over so she could parade around the stage like the next Supreme. Her (failed) leggings line. Lohan has done so much for LGBTQ+ rights and queer culture.

Without further ado, here's our proposed tracklisting for LiLo's album — let's call it Parental Advisory — that is about to wreck us all, inspired by all things La Vida Lohan. Only the real can relate. Will Lohan incorporate rock or will it be smooth radio pop? Will she do weird PC Music-approved shit? Literally she can do anything and the gays will die.