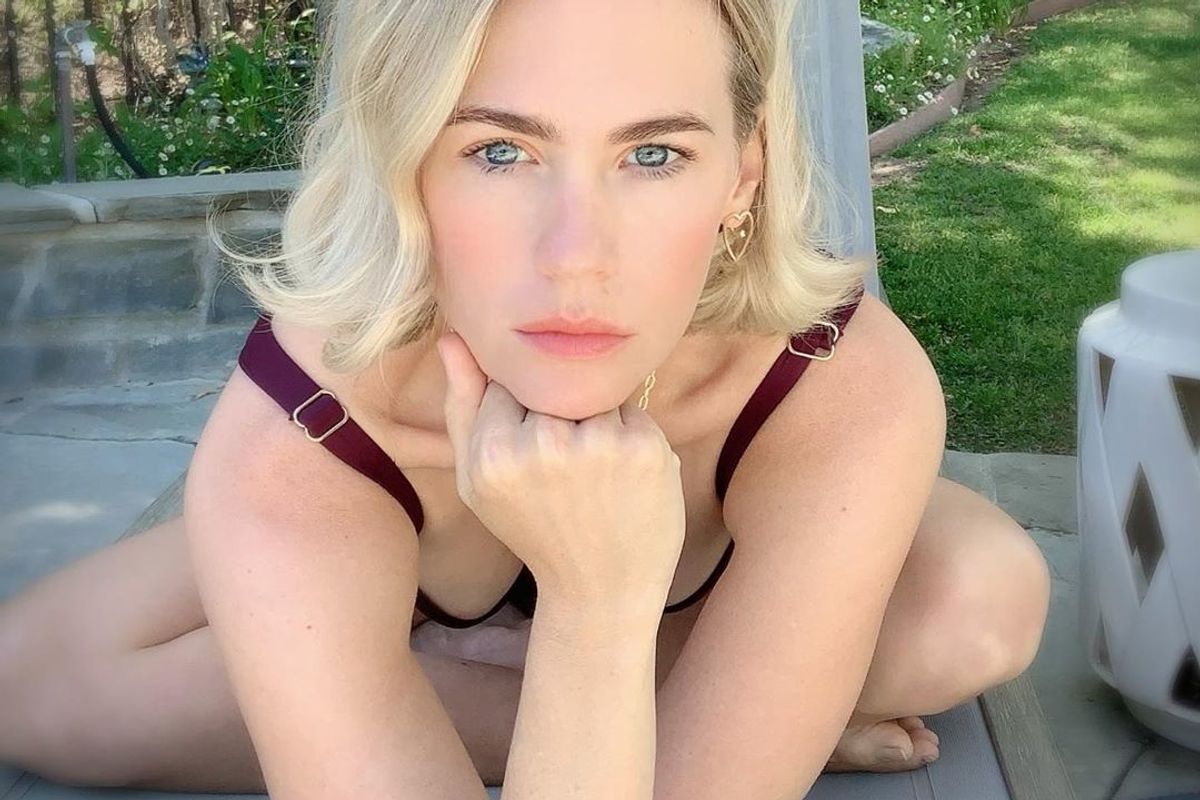 Unfollow Every Celebrity Except January Jones

Celebrities are just like us — which is to say, celebrities are boring now. Entertainment the world over has either gone digital, been postponed, or all out canceled. We can't watch Naomi Campbell walk a runway, so we have to settle for watching her work out. We can't watch Miley Cyrus in concert, but we can tune into her talk show. Admittedly, these two and others are trying hard, but they just can't capture the magic of life outside. The efforts of famous people to distract us during lockdown have been admirable, but futile. This is true for all but one. Against all odds, January Jones has prevailed as the only good quar content creator.

January Jones has been on Instagram since the dawn of time: 2014. January Jones in quar, however, is an entirely new phenomenon. The first post to catch my attention was posted March 20. Captioned "Skin: 5 Marbles:-167" it shows JJ sporting a LED face mask, sipping a Coors Light through a straw, and doing a bit of a jig. Immediately I had questions. What is going on here? Is this Betty Draper? Are these the rights of man? I didn't get answers, and instead the universe gave me a picture of Jan Jon in a vintage dress picking fruit from her yard. The caption? "Grocery shopping in my yard." Fucking genius. It was upon seeing her "where is Post Malone" video, posted on March 27, that I knew that JaJo was in a league of her own.

Related | We Asked Celebs to Send Us Selfies on Instagram

Among the perils of living in these times, aside from the literal pandemic, is watching our faves either say something heinous and wrong (Vanessa Hudgens' pivot to machiavellianism, Ellen Degeneres' prison mansion), attempt to sing us into a better tomorrow, or say nothing at all. Jan, meanwhile, has stood out by refusing to pander to these trends and instead simply being herself. By teaching us all solo synchronized swimming. By wearing only flowy gowns, swimsuits, or sweatpants and nothing else. By somehow making the least and most sense of anyone on the platform.

I've put in my 10,000 hours and identified what exactly makes January Jones the only famous person worth following during our current moment. Other celebs take note.

Every auteur has a signature, and JJ's framing is positively Kubrickian. It's a delight to see the familiar blurred edge on each image or video. It's a subtle but strong effect that draws the eye to our point of focus: Jan Jones herself.

The January Jones Lack of Editing

It is worth remembering that Jones is a talented actress, but even talented actresses occasionally need a second take. She embraces this truth, and on April 21 her followers (1M strong and growing) received the gift of not only Not Grey Gardens: Haven't Learned to Edit, but also Not Grey Gardens (Take 2). Both I expect to be considered by the Academy for best short in 2021.

Every video posted on @januaryjones' grid is also posted on her IG stories, which indicates that she has a keen sense for the lifespan of content. Presumably she has an entire 360° strategy behind the scenes. January, please run PAPER's Instagram. My job is yours if you want it.

The January Jones Art of Tutorialing

Influencers, like traditional celebrities, have failed us. Thankfully, January Jones is here to save their industry. I've so far learned about both skincare and detox bathing according to January Jones' charming, unorthodox tutorials, and will leave quarantine with better skin and less stress.

Kiernan Shipka says it best: "I always wanted to be January Jones when I grew up, and since she's graced us with her presence on Instagram, it's even more so."

To sum up, it is the January Jonesness of it all. She is the secret ingredient, and her formula is aspirational but inimitable. Once-underutilized mediums like IGTV and live streams feel far too familiar now; everyone's screen time is peaking while joy and entertainment have long since left the chat. We need January Jones now more than ever. As long as she remains authentic, unabashed and slightly out of focus, she has my undivided attention.

For the final word, I reached out to Sally Draper herself, Kiernan Shipka. In an exclusive comment provided to PAPER, she says it best: "I always wanted to be January Jones when I grew up, and since she's graced us with her presence on Instagram, it's even more so."