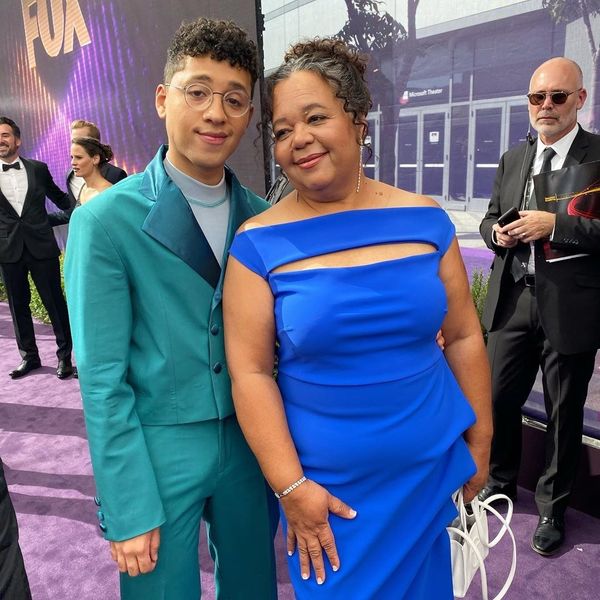 Jaboukie Found the Designer for His Custom Emmys Suit on Twitter

When Jaboukie Young-White saw Lil Nas X's cover of TIME, the 25-year-old comedian/writer took to Twitter to figure out who had created the rapper's red tailored suit with a cropped, double-breasted jacket. As it turns out, Los Angeles-based designer James Flemons (of the Solange-endorsed label PHLEMUNS) was behind the look, and made it custom for the "Old Town Road" chart-topper.

"A few friends brought the tweet to my attention," Flemons tells PAPER. "When I saw it, there was already a DM [from Jaboukie] waiting in my inbox. He was very proactive about getting the ball rolling, which excited me because I was already a fan of his and was so excited to work on another custom suit."

So Jaboukie enlisted Flemons to dress him for the 2019 Emmys, which he attended Sunday night alongside his mom. "We met about a month before the awards, but with our busy schedules and living on separate coasts [Jaboukie lives in New York], we had a fitting and whipped the suit out in about a day." According to the designer, all of his custom PHLEMUNS suits have been turned around in no more than two days. "It's not an ideal timeline," but we've go the magic AKA our team member and lead seamstress May [pictured fitting Jaboukie, below]."

Jaboukie was really interested in wearing an emerald green suit, which echoed Flemons' love for monochromatic looks. "I suggested the satin accents on the lapel, pocket and buttons," the designer says. "Once we had the fitting and got a better idea of his outfit, I suggested a layered mesh mock-neck under to tie in with his suit and coordinate with the white and blue in his mom's look."

Famous for his work as a correspondent on The Daily Show and writing on series like Big Mouth and American Vandal, last night's awards show was a big night for Jaboukie. He's become a vital voice in the entertainment industry, and used the Emmys red carpet to notably shout out Bowen Yang for being the first Asian cast member on SNL. "He's also openly queer," Jaboukie told GLAAD. "I think that's awesome."

It was also a monumental event for Flemons, who made his Emmys red carpet debut on Jaboukie. "This is my first Emmys look," he says, and managed to create something that still spoke to PHLEMUNS' core. "I think the brand stands a lot for finding that middle ground of casual and formal clothing with a flare. This suit feels like a great move in the evolution of the brand encompassing those elements, showing the range of the brand and opening up the PHLEMUNS world to new audiences — especially being on the red carpet at an event like the Emmys, where men's suiting can be so boring.

For more on PHLEMUNS, visit phlemuns.com.