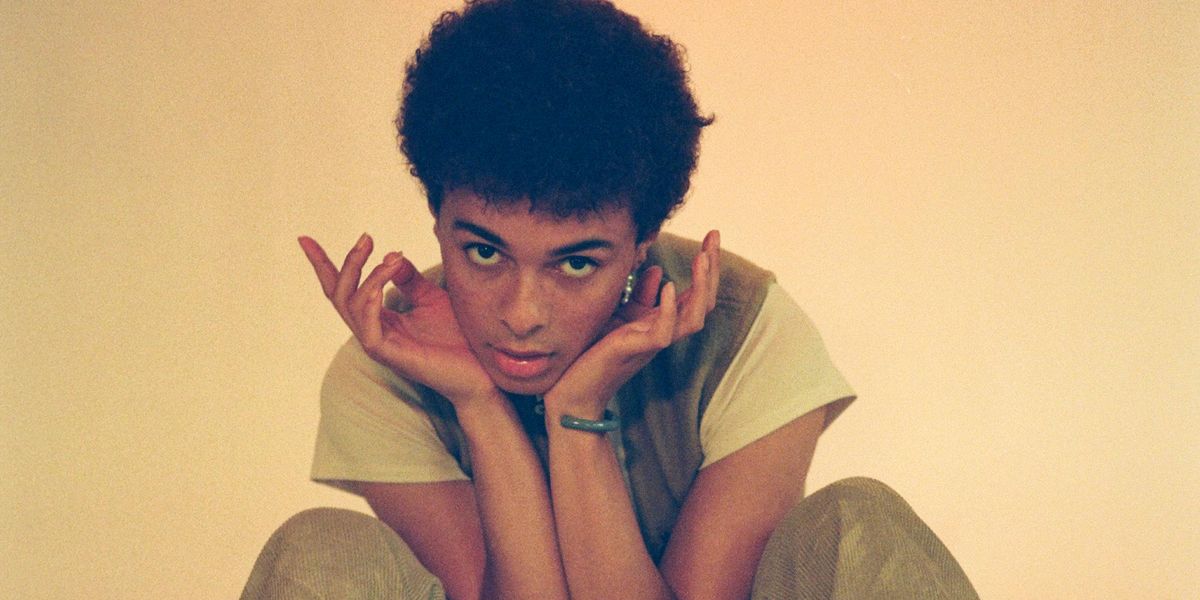 After finishing his 2020 EP, isaac's insects, 17-year-old Massachusetts musician Isaac Dunbar began examining his "close-minded approach" to pop music. "I hated how I interpreted pop," Dunbar says, explaining how he was "strictly" listening to more experimental artists like Aphex Twin, Arca, SOPHIE and the Cocteau Twins. Though he wanted to create new music that aligned closer to his personal tastes, Dunbar still had a "lust" for pop. "I love how it makes me feel," he says.

So Dunbar's latest effort, evil twin, attempts to find a "middle ground" between the two, building out a conceptual EP divided into two parts. The first three tracks represent Dunbar's angry evil twin, with more unruly, hard-hitting production and darker, distorted vocals — a break from "traditional pop music," as he describes. Then, the final four songs flip back to a softer side of Dunbar's personality, featuring more classic, radio melodies and sensitive songwriting about love and insecurities.

"I think it's really important that I did this because I know for a fact that in the future I'm going to be introducing weirder shit and I could still consider it pop music," Dunbar says, referencing "Heavy Metal Lover" off Lady Gaga's Born This Way as a successful example of bridging the gap between alternative electronic and radio. "I believe that anything could be pop music as long as the message is strong and clear. I think 'pink party' does that. I think 'rendezvous' does that."

While Dunbar self-produced all of his previous work, the musician says he wanted to experiment this time and looped in a cast of contributors that transformed evil twin into a collaborative effort. From producer Joel Little to songwriters Leland and Silver Sphere, the seven-track project is the result of multiple perspectives and months of back-and-forth. Ever the restless creative, though, Dunbar plans to revert back to full autonomy moving forward. "I know for a fact my next record is going to be all produced and written by me," he says. "Period."

Below, PAPER caught up with Dunbar to talk through all the inspirations behind evil twin, from Halloween parties in Paris to ex-lovers and Katy Perry's Teenage Dream.

"pink party" is about my first time going to a club. I was in Paris around Halloween on tour with Girl in Red in 2019, and the guy at the front [door] didn't ID me. I think he thought I was of-age, so I got into this club. Since it was Halloween, I had to be wearing a costume and had glitter on my cheeks. I think that's what got me in because I blended in, somewhat. So that's where the lyric comes from: "Pink party, cheekbones and glitter."

I walk into this place and it was decked out in pink. Every single element of this place was pink: The lighting, the furniture and everybody was wearing pink. I didn't get the memo. When I got to this club, I had this hope that I would meet the love of my life and have a little rendezvous with them. And that did not happen. So in the song, "pink party," I sing to this imaginary lover that I have and all the things that I wish had happened, but did not. A lot of that song is me fantasizing.

"fan behavior" is about this person in my life who I idolized a lot and put on a pedestal, but then a lot of things happened. And now they talk about me a lot, and it seems as though they are now putting me on a pedestal because they're acting like a fan. I used to be a fan almost, and now the tables have turned.

"fan behavior" was more in regards to platonic friendship, and "rendezvous" is totally a romantic interest. It's about me being mistreated by someone that I put on a pedestal, and me finding my words and calling the person out. At first, this song started off as a very basic trap-pop beat. It was giving today's Top 40 and I did not like that. So I sat down with the song and completely changed it. I made it all synthy and crazy, very inspired by Arca. Especially in the last breakdown percussion, I added a ton of bone-crushing toms and there's gunshots I blended in and pots and pans crashing. I sampled me literally banging a wooden spoon against pots and pans, and I just chalked it all up. I love that one.

I wrote "intimate moments" after I went to Martha's Vineyard for the first time, and it was literally the day I got back from that trip. [Producer] Joel Little had sent me a bunch of instrumentals. He's a really fucking good producer and sent me a folder of tracks that I had for like four months. I sat down on my computer and randomly opened it up one day. I wrote this song about all my insecurities and how they're holding me back and my fear of getting close to people, whether romantic or platonic. The reason I have those insecurities is because of my trust being broken in the past, so I wanted to address all these insecurities and bring them up to the surface for me to face head-on. It was a really hard song to write, a struggle. It was very easy for me to find the words, but it sucked writing.

I think ["intimate moments" is] one of the favorites and a standout. When that song came out, I was flooded with DM's unlike ever before from people saying how much they connected with the song. I'm just grateful because I make music for the purpose of healing. I could talk about healing for days because it's what music has done for me.

"love, or the lack thereof"

"love, or the lack thereof" was another Joel Little track. I opened that instrumental up and wrote to it. I only had the first verse that I thought it was a really solid and strong idea, and I knew I wanted to proceed with finishing it up and writing it. So I took it to [co-writer Leland] and this was when I was on an LA trip. We just played it over and over and over again. He wrote the bridge of that song, and then I took it to my other friend, Silver Sphere, a really fucking incredible artist, and we wrote the second verse together. Everything just worked out. [Leland] is such an incredible writer. He's always shooting out ideas constantly, like anything, just because he's not shy. I get really shy when writing with people, especially if it's new people. And I get scared to throw out ideas, but he's so good at making the environment really comfortable.

I dream and write them down, so I'm very much into escaping reality and in a healthy way, putting myself in the shoes of others and making shit up. "kissy kissy," it's a little bit more honest than "pink party." "kissy kissy" was about a specific person and when I was making it, I was trying to emulate the feeling of the coming of age, like Lindsay Lohan and giving 2010 high school drama. I reference Teenage Dream by Katy Perry, capturing a whole world. And, I don't know, just the ooey gooey and gushy, cheesy parts of romance — the most childlike and purest form of infatuation.

"the world & all her pearls"

I've had "the world & all her pearls" for about three years, and I just sat on it and kept it in the archives. I wanted to wait for the right project to put it out. And I felt evil twin was perfect because evil twin is a concept record. The first three songs are sung by my evil twin, which are more experimental records, and the last four are sung by, quote unquote, me. I felt like "the world & all her pearls" is a pop record, but it's not the most standard pop song because of the strings and the structure, but I felt like the songwriting was really beautiful. That one I wrote and produced by myself, and I took so much time scoring all the strings. I put so much work into that song and it sounds just like the closing of a book, and I knew it needed to be the end of this EP. Also, I was tired of holding on to it and wanted to put it out into the world.