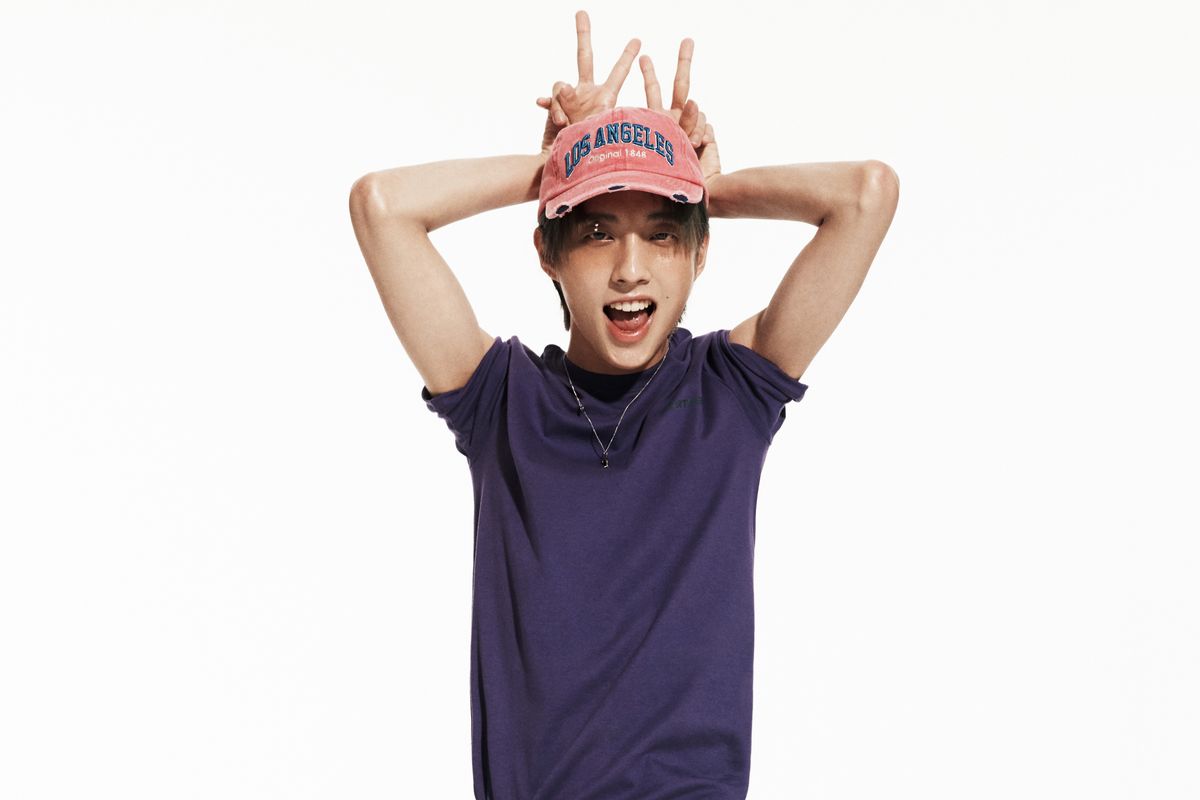 Holland Is the Future of K-Pop

Holland is the future of K-pop. He's also one of the most important entertainment figures in the fight for international LGBTQIA+ rights in 2019.

Ever since the independent 23-year-old idol emerged with his debut single, "Neverland," in January 2018, he's further propelled an important global conversation on the state of LGBTQIA+ representation (or rather, the lack thereof) in the ever-expanding Korean pop music industry. Go Tae-seob, professionally known as Holland, isn't just vocal about the necessity for increased queer representation in Korean media — as K-pop's very first openly gay artist, there's a world of cultural implications hinging on his success.

Over the past 70 or so years, substantial swaths of Korean society have been widely influenced by evangelical Christianity, a byproduct of both Korea's rampant Westernization following World War II as well as the breakneck development of modern Protestant schools and universities (some quite prestigious). Perhaps as a result of this systemic religious ascendancy, LGBTQIA+ intolerance and prejudice remains the unfortunate cultural standard: Young queer-identifying people are often pressured to keep their sexualities private, while many who do come out to their loves ones are encouraged to attend conversion therapy. According to data compiled by the Pew Research Center, more than half of Koreans believe homosexuality should "not be accepted" in society, a belief witnessed en masse in 2018 when more than 200,000 citizens signed their names on a homophobic petition to stop a gay pride festival from taking place in Seoul. And legally, the nation does not recognize any type of union or marriage between same-sex partners. (Prior to his election, Korean President Moon Jae-in stated during a 2017 debate that while he didn't agree with outright "discrimination based on homosexuality," he also didn't support same-sex marriage.)

While intimate same-sex acts between citizens are technically not illegal, young gay men who serve in the compulsory military program are subject to the military's draconian "anti-sodomy law," a clause which prohibits consensual sexual activities between same-sex partners in the military. Gay soldiers are often discriminated against and individually targeted, with those convicted subject to suspension from duty or discharge from the army, as well as potential prison time. Alarmingly, in 2017, a Korean human rights watchdog group reportedly uncovered an insidious military sting operation to expose and expel gay servicemen from their ranks.

Save for more inclusionary members of the Korean youth, as well as a number of emerging safe spaces and movements, like the growing number of gay-friendly nightclubs in Itaewon and a burgeoning movement within the Seoul drag scene, queer exclusion and harmful stereotypes abound. It's no wonder, then, that Holland feels an immense pressure to represent his community, particularly queer-identifying Koreans and East Asians, as positively as possible in an effort to normalize and increase visibility in Korean society and media. He measures each action, word and appearance carefully as he balances the incredible — and at times unfair — weight that has been placed on his shoulders.

While openly embraced by listeners and fans across the globe, it's been an uphill battle for Holland to find his place at home in the notoriously rigid K-pop industry. Though he recently announced he teamed up with a company to help him navigate future releases and tour opportunities, the performer has otherwise worked completely independent to release music, including his crowd-funded 2019 debut EP, Holland. Part of the challenge has been his unique position as K-pop's sole openly gay artist, a role that has likely presented a marketing conundrum for the more massive, mainstream domestic K-pop agencies whose financial support and training he otherwise could have benefitted from.

Interestingly, lightly homoerotic themes, like "skinship" (affectionate non-sexual touching typically between two idols of the same gender), and androgynous fashion and makeup styles are staples of many K-pop performances and videos. More salient queer-positive messages, however, have increased in K-pop slowly over the past few years, with artists like Sistar incorporating same-sex story lines into their music videos and others, like Sunmi, acting as vocal allies. But Holland — whose stage name is a clever reference to the first country to legalize same-sex marriage — is actually one of the first artists to not only be open about his sexuality publicly, but to incorporate his own personal queer experiences into his lyrics and visuals.

His debut music video for "Neverland" was historic in its unapologetic portrayal of two young gay lovers (played by Holland and another actor) kissing and simply existing happily. Without any push from a big label or corporation, the video racked up more than 1 million views in less than 24 hours, and has nearly 12 million to date. (Notably, the video was slapped with a 19+ rating in Korea upon its release due to containing same-sex content.) Two equally pro-queer releases followed: 2018's "I'm Not Afraid," an anthem encouraging people who are marginalized or othered by society to live fearlessly, and "I'm So Afraid," an emotional electro-ballad recounting Holland's own fears, insecurities and trepidation prior to coming out. The video for his melancholy 2019 house track, "Nar_C," chronicles the highs and lows and eventual breakdown of a relationship between Holland and his onscreen boyfriend.

It's perhaps fateful that the track that introduced Holland to the world is titled "Neverland:" his fans, who he endearingly refers to as Harling (a portmanteau between Holland and Darling, the last name of Wendy, John and Michael in Peter Pan), are undoubtedly the most precious thing in the world to him. Together, they stand in solidarity — Holland creating an inclusive, loving, safe space (not unlike the track's fictional fantasy world) with his pro-queer songs, and Harling returning the love with supportive open arms and impassioned social media declarations to "protect Holland at all costs."

Just days into June, the singer sent a sweet message of unity and hope to his followers: "My lost children, follow me," he tweeted, capturing the core spirit of Pride with a simple five-word promise. It was a poignant reminder to fans that Holland is here now — and he's ready to help usher us into a world where we can all belong.

Holland: I am not really sure what the opinions are from all Korean idols, but there are many people who give me lots of support. I know that as I work harder and make more music along my career, more colleagues will send their support.

Soju: Do you find it hard to connect with your fans because so many of them are international?

Holland: It hasn't been too difficult so far. I just wish my English was a bit more fluent and that I was good in every language including French, Portuguese, Japanese, Chinese, etc. But right now I am eager to learn English.

Chester Lockhart: Some of the most vocal queer activists in South Korea are the small but growing group of drag artists, do you ever go out to the clubs to see them? Can we expect any collabs in the future?

Holland: Of course! I am a big fan of them. I got to know Nana, the drag artist performer, through her appearance on my music video "I'm Not Afraid." Ever since then, I go see Nana's show sometime. I think they are such talented artists. It would be an honor if we ever do a collab in the future.

Soju: Are you feeling the love and support from the LGBTQ community in Korea?

Holland: I think so? I mean, I definitely would love their support. I know that my action also has an impact and reflect on them, so I try to be very cautious about how my actions and words are portrayed. They are supportive and also keep me grounded.

"I am well aware that the mere existence of my music has created a social controversy."

Chester Lockhart: Where are the safest spaces for queer people in Seoul?

Holland: I think perhaps Itaewon? It is a place that not only lots of queer people gather, but also people from diverse backgrounds gather. So it is a place where diversity is respected/celebrated. I personally love to go to that area because there are so many restaurants of different cuisines.

Soju: Do you feel like your music is becoming politicized? Is this something you want to avoid?

Holland: It's a great question. I would like to be seen as an artist and for my music first and foremost. I do not want to be taken too politicized or as a very heavy social issue. However, I am also well aware that the mere existence of my music has created a social controversy. But I want to deliver my own story to people in my own way. I want to be seen as an artist first and foremost, although I know that other matters will also follow. My priority in my music is always on what I want to try and for my fans, so I really want to stay consistent.

Chester Lockhart: How has your family responded to your queerness?

Holland: They really love me for who I am! At first they felt sorry that I was not able to share my struggles for such a long time. They are really great. I know that they must have been confused because they had to find out not only my sexuality but also my debut all at once. My parents and relatives all care for me and love me so much, and I am so grateful. It's perhaps because I am such a good kid? Lol.

Soju: Can you give us your favorite gay icons and why?

Holland: Sadly, I cannot think of many gay icon musicians in Korea. But there are so many in Hollywood and pop, so it's almost hard to pick just one. I think my favorite gay icons from my generation would be Ellen DeGeneres. I watch her show all the time! I also love Lady Gaga.

Holland: I think the fact that a lot of fans, artists, and collaborators living outside of Korea have supported me and gotten to know me has already been a great help. I am always very grateful for them. I think there are still more opportunities in some other countries than in Korea for queer artists. I hope more people outside of Korea give more spotlights and focus on the LGBTQ issues in Korea because I want Koreans to see more diverse perspectives and opinions about this.

"I hope more people outside of Korea give more spotlights and focus on the LGBTQ issues in Korea."

Soju: If Ellen DeGeneres wanted you to come on her show, would you do it and what's the song you would perform?

Holland: Oh my! Just by thinking of it makes my palms sweaty and very nervous about whether I'd do a good job. My answer is "yes," of course. I'll have to prepare so much and think really hard about how to prepare for the stage and improve on my English. I will probably sing my very latest release. I guess if it's now, it'd be "Nar_C." Is this answer too realistic? I love you Ellen! I hope I can meet you one day.