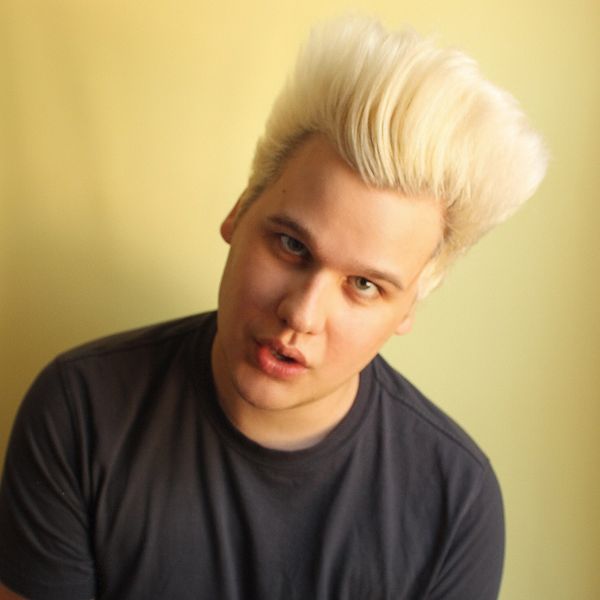 Everything Is Terrible But It's Still This Author's Year

I'm incredibly jealous of Greg Mania. In addition to being both hot and young, he's also an extremely talented and hilarious writer who has somehow managed to live my club kid dream life? His first book, Born to Be Public, which you should do yourself a favor and buy immediately, is a very funny and voice-y deep dive into sex, mental illness and nightlife — my three most favorite subjects.

Greg and I became friends a few years ago after locking eyes across a crowded and sweaty bookstore in Brooklyn on a hot spring night. I'm so lucky that I got to ask him some idiotic questions about this book that he is unleashing onto the world.

Writing a book is such a dumb, grueling slog. WHY DID YOU DO IT?

Why do we do this to ourselves? AND people are going to read it? I did not sign up for this! My initial intention with Born to Be Public was to just put together a collection of funny stories about how I basically used the internet to scam people into thinking I was cool. Then it started to include vignettes — am I allowed to use that word if I don't have an ambiguous but gorgeous European accent? — about all the dumb shit my friends in New York City and I got into, specifically in nightlife. Next came recounts of depressive episodes, punctuated by day jobs and getting dumped, followed by endeavoring to turn writing stupid jokes on the internet into an actual career. Eventually a book that I thought was just going to be about me being an idiot on the internet who gets dumped a lot turned into an actual memoir. It's not unlike a Crock-Pot recipe: you throw a bunch of ingredients into a vat and then, with time, it turns into a cohesive meal you can (hopefully) enjoy.

What's the worst part of writing a book?

ASKING PEOPLE TO BUY IT. ASKING AUTHORS WHOM YOU LOVE AND ADMIRE FOR BLURBS. ASKING YOUR FAVORITE AUTHOR TO INTERVIEW YOU FOR PAPER. I just feel like a self-fellating asshole, doing the digital equivalent of banging pots and pans outside peoples' window asking them to please support this stupid, gay book because I have no other viable skills. I'm stuck doing this!

We are strangers and trapped in a steamy elevator together. You are brave enough to broach a conversation with me. Tell me what your book is about before I have to get off on the 12th floor.

I would waste that time googling on my phone, "Effective elevator pitch," and then with four seconds left to spare, cry!

Give me all the pros and cons of this virtual book tour you are about to embark upon. Are you sad you won't be able to press the flesh with sweaty people standing in line to get their germs on you? Is your Wi-Fi connection strong enough to support 60 minutes of Zooming without making you all pixelated and shit?

Had I known I would be releasing this book during a global pandemic, I would have changed the title to Born to Isolate. I thrive in isolation. People who've read an advanced copy of this book are like, "It must be so hard for an extrovert like you," and I'm like, "Don't be fooled, babe!" Yes, I spent the majority of my early twenties clubbing, but do you know how many vices had to be in my system in order for me to pause Ugly Betty on Hulu and leave the house? If you've read the book, you'll know that the narrative thread is ANXIETY. Nowadays my vices are limited to a strongly brewed chamomile tea and you know what? I love that for me. I can just sit in my room and do events with cool bookstores? I don't have to spend $80k on skincare just so people won't notice a pimple scar? Sign me up. So to finally answer your question: ALL PROS, NO CONS.

The beauty of what I do is that I killed my parents when I was 18, so they could never object to anything I might ever write about them in the future. Are you worried about your parents disowning you? Did you ever consider throwing them into a volcano before your book was announced?

Listen, I will hand over six months' worth of royalties to anyone who can intercept my book before it reaches my parents' doorstep. I have reached the point where I'm like, "Oh no, what have I done?" I thought about warning my parents about the things I have written about — drug use, self-harm, suicidal ideations — but have ultimately come to trust that the book will adequately convey that yes, these bad things happened, but I'm safe from them. I'm okay! As for the embarrassing things, like all the sex stuff, WELP.

*Gestures broadly at every single Instagram ad on my feed.*

Tell me the best time of the day to write.

This is going to be controversial among the writing community, but I can't, won't, nor shan't write at night. I'm lucky if I still have any creative juice left at 3 PM. I'm a morning writer, full stop.

What was your last takeout order?

Because I live in Brooklyn, I am required by law to spend no less than $50 on a vegan meal from a restaurant whose Instagram posts get more likes in a day than mine do in a year. I got a fried chicken ("chik'n") sandwich with waffles fries and it was fucking delicious.

Top 10 songs to write to, what's on the playlist?

This book is funny, but its playlist is mopey at best, depressing at worst:

1."Where Is My Mind?" by The Pixies
2."Lucid Dreams" by St. Beauty
3."PrimeTime" by Janelle Monáe
4."So Happy I Could Die" by Lady Gaga
5."Ashes to Ashes" by David Bowie
6."No More Lonely Nights" by Paul McCartney
7."I Hate Myself for Loving You" by Joan Jett and the Blackhearts
8."All I Want" by Joni Mitchell
9."In The Flesh" by Blondie
10."Born to Lose" by Johnny Thunders and the Heartbreakers

What are you reading and what shows have you been watching?

Right now I'm reading Here for It by R. Eric Thomas and watching Michaela Coel's I May Destroy You on HBO. I CAN'T RECOMMEND BOTH ENOUGH.

I need a new disorder. According to your book, you are an expert in the trendiest ones to have. Please advise me which new bad habits I should adopt. I'm old and out of touch!

You've come to the right guy! Let me introduce you to SIBO, which sounds like a Scandinavian cell service provider, yes, but it's actually a bacterial infection in your small intestine. After years of assuming I just had irritable bowels — or just being dismissed as having a "nervous" stomach as my mother is wont to do — it started to get so bad in recent years that I feared leaving the house. I needed to have access to a toilet at all times. One time my old roommate was like, "Let's have a house party!" First of all, why would you want anyone in your home ever? And also, more than two people and ONE toilet? As your majesty would say, "Wow, no thank you!"

So I finally went to a gastroenterologist, who had me take no fewer than 87 different types of tests to figure out what was wrong with me. One of them was a breath test, which required fasting for 12 hours and then taking a shot of what tasted like extremely diluted apple juice that makes you shit every 47 seconds. Then you blow what looks like an inhaler every 15 minutes for THREE hours while a nurse jots down data about whatever it is you're exhaling. Then my doctor told me I had an overgrowth of bacteria in my small intestine, which was exasperated by IBS — at least I was right about one thing? — and she put me on antibiotics for two weeks. I had to take a pill the size of a Jetta three times a day. Then I had to go on this diet that has a name that would probably sound glamorous coming out of Heidi Klum's mouth, but it was miserable. And guess what? I STILL GET DIARRHEA ALL THE TIME.

Your book is so fucking funny. So funny! Which of your many personal traumas do you think had the most profound effect on your sense of humor?

I could win the Mark Twain Prize for American Humor tomorrow and it still wouldn't matter as much as Samantha Irby thinking my book is funny, so THANK YOU. The only way I can metabolize my trauma is through humor. I don't know any other way to survive. I mean, yes, I could breathe? But where's the fun in that? I've learned — and continue to learn! — many types of coping mechanisms depending on the trauma, but the common denominator is comedy. I have to find some way to laugh about it at the end of the day.

I thought this was supposed to be a fun, zany interview where we tell jokes back and forth, but now IT'S THE HARDEST THING EVER? Oh, man, here we go:

Fuck: Olive Garden. Like a number of men from my past, I have to be in a specific mood. I don't want it all the time; just when I'm feeling randy.

Marry: Cheesecake Factory. I mean, where do I begin? That sweet, sweet brown bread that graces your table before you even order one of their 97,000 appetizers warrants a marriage proposal alone. Once you finish highlighting, indexing and cross-referencing their appetizer options, you get to pick your main course, which offers every single type of burger to orange chicken and white rice to pasta to YOU LITERALLY NAME IT. It has everything. The only thing it doesn't have — which is SO ODD — is my favorite meal. My go-to. My number one. Chicken fingers. Not even on the kids' menu! But I suppose marriage is about compromise.

Kill: Panera Bread. Their mac n' cheese, which I LOVE SO MUCH, gives me the worst diarrhea. So if I can't have it, NO ONE CAN.

Samantha Irby is the #1 New York Times-bestselling author of Wow, No Thank You.

Born to Be Public is available for purchase here.