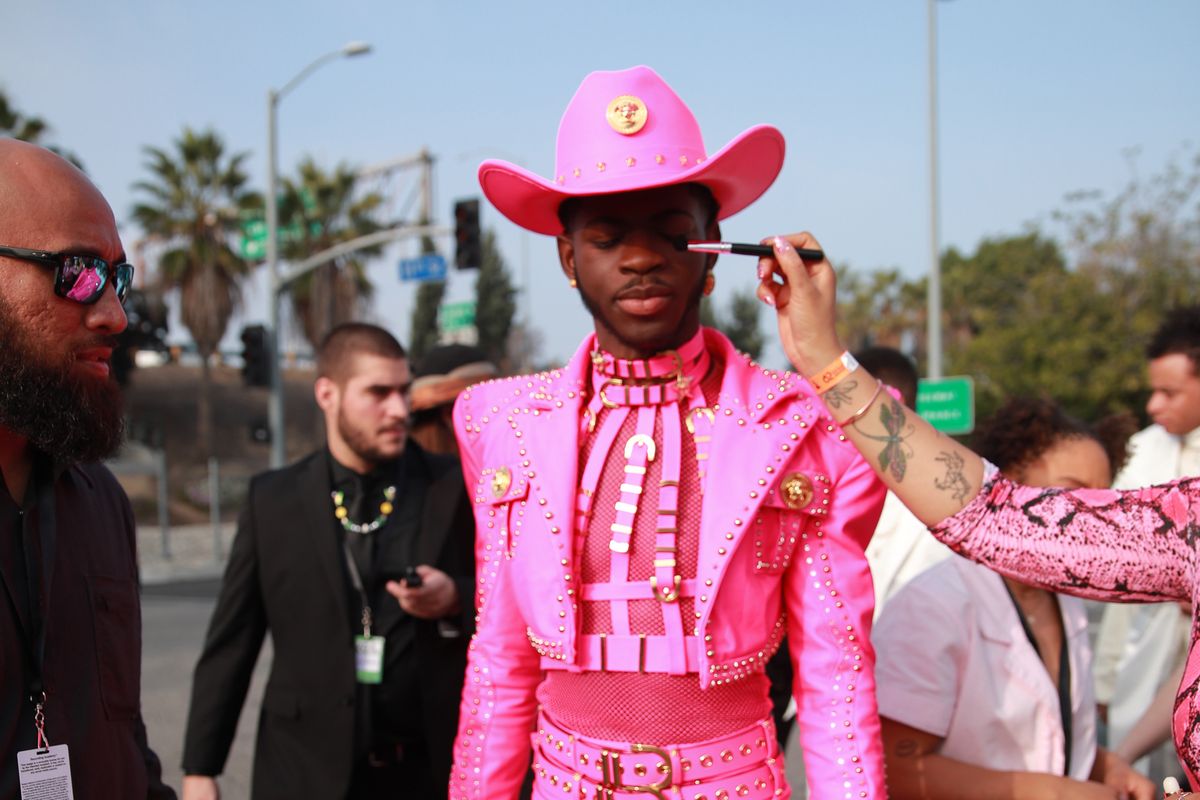 Who won big at the 62nd Grammy Awards, which aired live from the Staples Center in Downtown Los Angeles on Sunday night? Couldn't tell ya. Lana Del Rey didn't, that much I know. Neither did Countess Luann or Lea Michelle, both robbed of nominations if you ask me. I'm not gonna waste your time lamenting about how Lana Del Rey's Norman Fucking Rockwell deserved Album of the Year over Billie Eilish's very-good-but-not-superior When We All Fall Asleep, Where Do We Go?.

Instead, let's relive one of the best red carpet interactions of the night. "You bought that off the rack and it fit like that? Makes me want to hurl," Entertainment Tonight's Nischelle Turner told Lana Del Rey of the sparkly silver gown the Grammy nominee said she found at her local mall. "I tailored it right there," she responded, indicating the small areas just below her armpit. Was the dress emanating Mother of the Bride vibes over Old Hollywood glamour? The answer's not no!

There was a heavy theme of "we've seen it before" on the carpet. Cardi B back in Mugler. Billie Eilish keeping Gucci as her go-to brand. A pitchy Gwen Stefani once again in Dolce & Gabbana. ("If you're showing up to a red carpet event in 2020 wearing D&G you're outing yourself as a very ignorant person," wrote Nylon's Allysa Vingan Klein.) Not even Ariana Grande, returning to the ceremony for the first time since 2016, could save us. Her 20-foot custom tulle Giambattista Valli dress was... a lot of fabric.

The only real wowza moment for the ladies came courtesy of Lizzo in a custom Atelier Versace look inspired by icons before her like Marlene Dietrich, Madonna and Whitney Houston, according to her stylist Marko Monroe. Particular attention should be paid to the inserts on the paneling that start at the princess line and trickle down the hip, which really ups the dress from a slay to gooped-and-gagged-level show outtery. Lizzo remains one to watch on red carpets, treating her looks with the same amount of care, precision and fearlessness as her music. We stan.

But let's not delay any longer in getting to the men, who electrified the carpet with an array of looks that ranged from camp to tailored perfection — it's clear that men stepping their pussies up on a red carpet is no longer praise-worthy; it's a mandate. Although we're still gonna dole out some deserving accolades. Three names immediately come to mind: John Legend, the night's best dressed in Alexander McQueen Spring/Summer 2020, Lil Nas X in a bubble gum pink custom Atelier Versace look, and Billy Porter in a custom Baja East jumpsuit by Scott Studenberg.

Let's start with Porter and work our way back.

Just a few weeks into the new year, and Porter is already on his fifth carpet moment. It began with "Handmaid's Tale Realness" in Hogan McLaughlin at the American Film Institute Awards, then we were given a "Blaque Swan" moment in custom Alex Vinash for the Golden Globes, followed up shortly thereafter by custom Dapper Dan x Gucci for the film premiere of Like A Boss, and most recently "Fashion Gumby Butterfly Realness" in another custom Hogan McLaughlin look for the Critic's Choice Awards. Of course, many were wondering how Porter would compare to his biggest sartorial competition of the night: himself.

70,000 hand-placed crystals was how. Porter stepped out in a bright blue crystal fringe flared jumpsuit with a matching cropped jacket. But the real showstopper was above the neck, with Porter wearing a mechanically-retracting fringe bucket hat made in collaboration with Sarah Sokol, described by Studenberg as an amped up continuation of the brand's paparazzi-proof fringe bucket hats. (Sokol's work was memorably seen on the head of Janelle Monáe at last year's Met Gala.)

According to Studenberg, the look was conceived during a night of herbal libations and disco music with Porter's longtime stylist Sammy Ratelle. Somehow the topic turned to the Burberry crystal mesh bonnet hat with a face-obscuring veil that singer Billie Eilish had worn to the American Music Awards in November. "Sammy said he wanted something like that but knew that Billy would never let him cover his face. And then, a few minutes later Sammy was like, 'What if the fringe opened mechanically?'"

Easier said than done... unless you have someone like Sarah Sokol on speed dial. "I built the hat from scratch and used a few rings of steel wire on the brim," Sokol tells me. "Smooth Technology, who I worked with on Janelle's Met Gala look, drilled holes in the frame for me to sew through so I knew it would be secure. As a couture milliner, there isn't enough adhesive in the world to keep it as secure as sewing through it."

The hat contains two motors that connect to the front that pull each side towards the back. Sokol hid the battery behind the motors and added another layer of crystal fringe in front to hide the motors as well. The battery was controlled with a remote that Ratelle was holding and would click upon signaling from Porter.

"I love this look because I didn't have to hold back," Studenberg says. "It was like my gay wet dream because I got to go eleganza, opulence, you own everything, like crystal heaven, fringe galore. And the memes are fucking hilarious. It's so fun to work with people who creatively just want to go there."

Special attention must be paid to Lil Nas X's custom bubble gum pink Atelier Versace, which included a cropped studded jacket over a mesh shirt and double-collared harness as well as handkerchief bracelets. "Never seen a man ever wear a look referencing the Versace dominatrix collection," stylist Shannon Stokes aptly noted. How do you appropriately follow up a slime green Christopher John Rogers silk wool suit over a zebra-print top? This is how! The fit in the crotch may have pulled a bit and the shoulder pads were a little Gemma Collins, but the look is undeniably fresh, totally him, and the kind of garment I want to stay talking about.

Related | All the Memes Inspired by Billy Porter's Grammys Hat

We could also discuss the good fits of Shawn Mendes in Louis Vuitton, Nick Jonas in Ermenegildo Zegna, or Common in D&G... but we're running out of time, folks.

Instead let's end with a salute to the night's best dressed: John Legend in a tailored-to-perfection half-kilted look from Sarah Burton's Spring 2020 collection for McQueen. "John loves European style, so McQueen was an easy choice," Legend's stylist David Thomas tells me. "For the Grammys, I wanted to do something extraordinary but subtle in the color palette. I love this suit in particular as the silver color has an interesting sheen. It's mohair, so the suit catches the light nicely when photographed. It's not a regular suit — it's a style that makes you think!"

A McQueen sighting on a red carpet is rare unto itself, but especially McQueen menswear. Suiting is often reinvented to middling success (see Virgil Abloh's harnesses), but this look walks that tightrope of both classic and refreshing. I'd like to offer some flowers to whoever tailored these pants for John. I don't know you, but I love you.

On music's biggest night, a few opulent red carpet moments — and some powerful performances and speeches — brought solace from a world in mourning over the passing of Kobe Bryant. We miss you, Kobe.