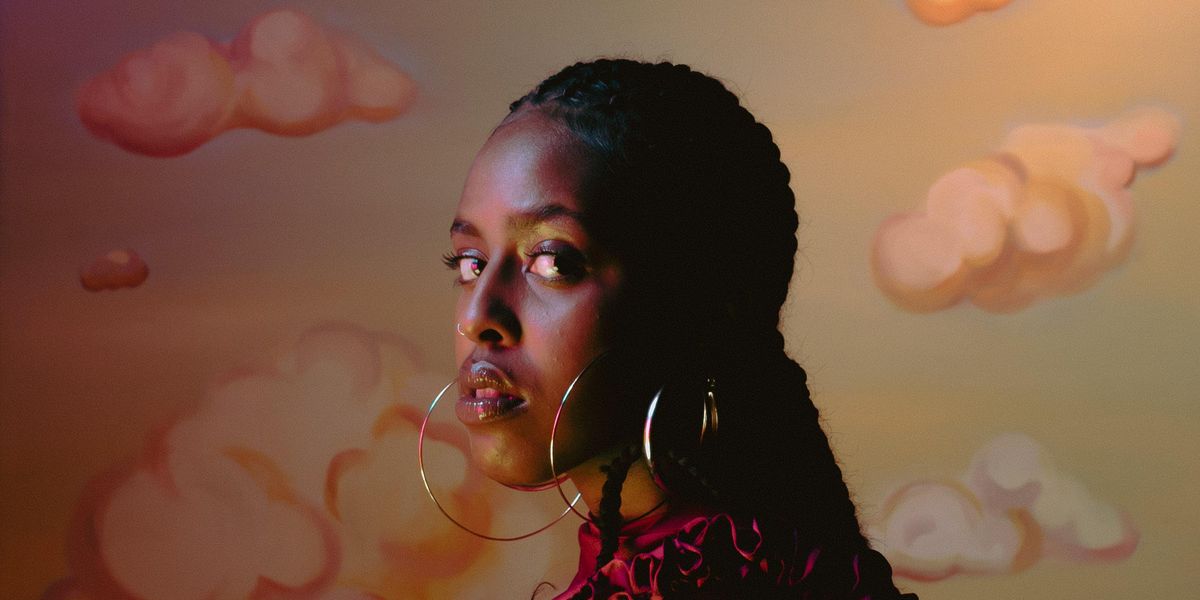 R&B artist Gaidaa, who comes from the Netherlands, was nearing a burnout when news of the coronavirus outbreak broke in early 2020. However, the lengthy period of stay-at-home orders and isolation provided an opportunity for Gaidaa to find peace, process her emotions and confront the situation's collective grief head-on.

The pandemic also brought an opportunity for Gaidaa to finally release music. "I've always been into music and singing," Gaidaa told PAPER. "My dad is a musician and my mom's a psychiatrist, so my mind is somewhere in the middle. I'm super overly analytical and dive into things way too much — sometimes good, sometimes bad, but I think somehow it makes sense."

Gaidaa's way of thinking has never been clearer than on her debut eight-track EP, Overture. Much of its narrative stems from Gaidaa's desire to leave behind the anxiety-ridden space that often occupies her mind in favor of a freer existence that better matches her creative ebb and flow.

Gaidaa pursued music because she loves it, but that doesn't lessen the challenges of being a rising musician. On "Falling Higher," near the end of the tracklist, she sings about the trials and tribulations that come with a fast-paced career shift. "I've been falling higher while I'm holding on," she sings. "Cause I've been wanting more than I can even handle."

An overture is the introduction to something more expansive — a bigger picture. For Gaidaa, the songs on Overture act as her artistic re-introduction with the EP offering deeper insight into this growth. The process became an opportunity for Gaidaa to get introspective, and the result is an effort filled with reflection on the "accidental" narrative that unfolded throughout the EP's creation.

"Honestly, it was a pretty cathartic experience," Gaidaa said. "Every single time we thought it was finished, the universe would come and be like, 'No, it's still not finished. This has to happen, this has to happen.' And the process itself, because it all happened alongside life and my self-growth and I was writing it as it was happening, it's an accidental reflection of everything — even the order of the tracklist."

Each track, from her single, "I Like Trouble," to the #BlueForSudan-inspired "Morning Blue," tells one fractional piece of the larger story that Overture provides. With the release of her new music video for "Stranger," PAPER spoke with Gaidaato to break down the intimate EP, track-by-track.

[It's] one of the first songs in the creation process. When we initially wrote it, we performed it acoustic before we made it into a proper song. The song was made very much so in the beginning of my headspace. Especially at that time when I wrote the song, I felt like I had to prove to people that what I was doing, I was allowed to do. I was consistently defending all my decisions and space I was allowed to take up. The moment I stopped trying to convince people of what I was trying to do, even though I didn't even know if I believed it myself and just was like, "Fuck it, I'm doing this," is when everything really, really started.

["Stranger"] definitely, for me, makes sense to be the next song on the project because it's the moment after deciding, "This is what I'm going to do." "Stranger" is about catching yourself in that pinnacle moment of growth and being like, "Yo, who am I? I'm changing. I'm not necessarily recognizing the person I'm seeing in the mirror." And that might not be a bad thing because we keep changing for life, we're ever-evolving. "Stranger" is about trying to maneuver and be okay with the fact that we're multifaceted people. We're evolving at all times and we might not be super aware of it. So it can be really confrontational when you're like, "I don't accept these things anymore."

It's my mom's favorite song. I always have to mention that when people mention the song. A lot of people take it as a romantic love song, but it's very far from — I mean, not very far from that. It is a love song, but it's a love song to me, from me. It's basically a letter from myself when I'm in a good headspace — when I'm not going through the shit, and I'm thinking and overthinking and I can't fucking think straight at all. It's basically reminding me to fucking take a chill pill, breathe and not be so focused on all these anxiety-driven things. You don't need to rush, you don't need to do things because other people want you to do things. Enjoy and thrive in this moment.

I was on a Masego tour as a background singer and I was supposed to go on the second half, but I was super anxious and I didn't know how to enjoy it. There was all this stuff going on in Sudan. People were protesting, fighting, really, for a lot of things. We basically came out of a 30-year dictatorship because people were protesting on the streets. Peacefully, too, and it didn't necessarily get met with peace. I have a lot of family back home, so it was a super anxiety-driven time. Towards the end of the first half of the tour, they were like, "Yo, maybe it's better if you don't come on to the second half, clearly there's a lot going on." And I took that super to heart. I was like, "I fucked everything up. This was an opportunity and now I'm not even going on this. I let my anxiety get in the way."

I wanted to say something about what was going on back home, but I didn't know how. I came back home and was just sad that I, in my head, fucked shit up. The second I accepted like, "Things happen, the universe has got you," I got an email from COLORS saying, "We're doing this #BlueForSudan project. Do you want to be a part of this?" I didn't have a song yet and I didn't want to force it either. My best friend was like, "I know these musicians in Belgium, you should just go link up with them." I had met them before in the Netherlands, so I met up with them and we jammed and immediately there were some recordings. In three days, we wrote and recorded the song and sent a version to COLORS. They were like, "Come through within two weeks." I recorded it and then I came back home and then it was out, basically. So, for me, "Morning Blue" is my love song to Sudan and the hope that people will keep trying, including me.

I was in my room and felt super shitty, and then I read this book that's not necessarily about God in a religious way, but whatever you want to believe in. Every time I read that book, some weird shit happens. I started reading lines and it was talking about how the only two things are love and fear, and everything's a subgenre from that. I was having struggles with faith and reading about how God is in all of us to a certain extent and we can make the decisions we want. I have this record that's been in my room for a long time and it's next to my bed, so I can see this every single day that I want to. The fact that I didn't internalize it this way bugged me out after I did see it. Because I just read some really spiritual stuff and then I look over and this shit says, "Everything You See Is Me." I just low-key had some weird moment with God.

I called my best friend, and he was like, "We're going to get this on, it's going to be fine." It's this recording that I had actually recorded in school a couple of months back and I didn't know what to do with it, but I really wanted to do something with it. We hopped on a call with my management and my best friend, who is also my art director, ambushed me. So I performed it live on Google Hangouts or something. Then it made it on [the EP], basically, and it made sense all together. It just became this thing about having faith and making sure to learn from the things you experience and to not take things for granted.

"Still Water" is about the in-between — the coming off a very low or coming off a very high or coming off a very overwhelming thing, to just sit still in the silence. When no one else is around and when you're left with nothing but you, it can be very confrontational. I'm not necessarily questioning, "Who am I?," but just nurturing that space and being content and finding peace in the in-between part — the part that's not as glamorous or dramatic. It's what life really is, just finding the calm in wherever things go, basically.

"Falling Higher" is me seeing the fruits of my labor slowly appear in front of my eyes. Basically, my dreams manifesting themselves. I wrote the song while I was in New York, and I remember the first time I'd ever gone to New York was with my mom and it was a work trip. The first time I went, I did a session with Topaz Jones. It was before "A Storm on a Summer's Day" came out. And then lo and behold, next time I was there it was for music and I was meeting my management for the first time and doing sessions with people and going to meetings and meeting my lawyer. I was in the room with people I respected and I was crying in my soul, "Who allowed me in this room?" I was super overwhelmed in a good way. I was like, "Damn, I really got myself here somehow." It was this disbelief, but it was also super overwhelming. Every day, everything was really fast, and every day, there was another thing happening. I was like, "Whoa, this is intense, but I like it. This is good, right?"

Along with "Interlude 47", [this was] one of the songs that randomly made it onto the project. It was made by accident, and I think the most fun I ever had making a song because Joshua J, he's literally one of my best friends. And my best friend and my art director, they live together, they're roommates and they're also best friends, and Maria [Sanchez Garcia] was there. We just went to the studio by accident. It wasn't even like we were trying to make music. We were just hanging out and vibing and chilling.

One thing led to another and it was like 5 AM and we're like, "What the heck did we just make? This is low-key fire. What is this?" We called my manager and he was like, "Can you send it to us in two days? It's going on the EP." Joshua himself produced it, and we just spent the next two days not sleeping. We spent a day just writing and then we spent a day just looking at production. It was two to three days of just getting together. I got my friend to record keys. The EP was supposed to be handed in at this point. I was being slow, and then it made it on in the end, as well.