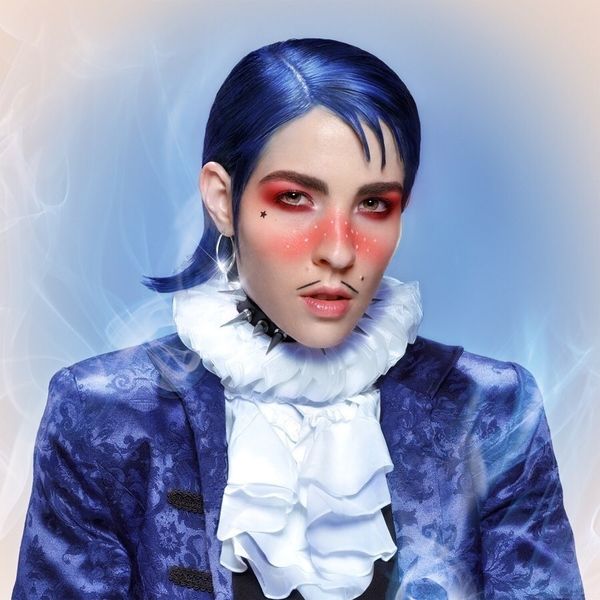 Dorian Electra is a master of the modern pop scene. The gender fluid performer, who uses conversations around social norms, sexuality and gender as the background for their futuristic synth-pop songs, is quickly becoming a powerful force within queer, independent music circuits.

Their politically incisive take that eventually translates into ultra-bubblegum bops is also what resonates with their growing pool of young fans. From singles like "Man to Man" to "Career Boy" and the newly viral "Flamboyant," Electra has touched on nearly every contemporary cultural discourse, and now they're translating this fiery sense of self into an 11-track debut album, Flamboyant, out today.

The album acts, in part, as a a tribute to legendary American pianist and camp icon Liberace and features Electra in all their outlandish glory. "Each track on the album takes on a different masculine trope or character in order to explore the nuances of gender, power, politics, sex, music, and fashion all with a future-facing pop sound." Electra previously told PAPER. "Everything from instrument choice to aesthetics draws from the history of camp... while also being deeply personal and radically queer."

While the songs alone are the perfect reflection of Electra's signature aesthetic, their Flamboyant album art — a colorful, pencil moustache-clad Electra with electric blue hair and freckles — has become a fan favorite, with followers recreating Electra's face. So popular is the new look, you can now try it on as an Instagram filter (created by @alejandrostudio). The person responsible for their buoyant avatar is makeup artist and hairstylist Ally McGillicuddy, who has been the creative force behind a number of Electra's previous looks across various singles.

How did you first get involved with Dorian's new album?

What was the inspiration behind Dorian's look?

Dorian will usually send me a ton of references and then we'll get to the studio and play around with each look. I love to look at the wardrobe, feel the mood and go from there. For this album art, there was a mix of things you'd never think to mix: elements of anime, dirt biker aesthetic, goth cowboy, and this image of a skeleton playing a guitar with lightning striking. It was really amazing to see all of that come together.

"For this album art, there was a mix of things you'd never think to mix: elements of anime, dirt biker aesthetic, goth cowboy, and this image of a skeleton playing a guitar with lightning striking."

For the dramatic blue eye I started with a base of Urban Decay's Primer Potion (I can't live without it). I then laid down a few layers of TPSY dazzler eyeliner in bluejay bird, and pressed Pacifica Lapiz eyeshadow (from their Love Stoned palette) on Dorian's lid over the liner and smudged the shadow all the way around the eyes.

I added Urban Decay's Perversion black eyeliner all around the water line and smudged that out too along with a little MAC Haught and Naughty mascara for that bad boy look. For skin, I am a big fan of skin prep so I always use Bioderma to wipe away any leftover makeup or oils. I then used the MAC strobe cream to moisturize and add a little sheen. For foundation, I used MAC Face and Body foundation with a dampened Beauty Blender sponge and gave a liberal mist of MAC Prep + Prime Fix — that's that glow you are seeing. For brows, I used a mix of Anastasia Beverly Hills Brow Wiz in Taupe and Glossier's Boy Brow in brown. Dorian wanted very glossy lips, so I shellacked on some MAC Lipglass and then added the infamous mustache with my Stila Stay All Day liner in black. For the anime hair, I straightened Dorian's hair with my mini straightener from Amika, teased the roots and then used shape shifter sculpting wax from Persephone, finishing it off with Bed Head's Flexi Head.

For the album cover look, we wiped off the mascara and liner, and changed the eye shadow color. I used a mix between Lime Crime's Venus palette and Jeffree Star's Blood Sugar palette. The black star is the MILK makeup star stamp, and the white dots are Jeffree Star Velour Liquid Lipstick in white. We changed the hair by spraying it with water and shaping it into the spikes using the sculpting wax from Persephone.

Did you and Dorian come up with a central concept for the makeup and hair together? Did they come to you with a specific idea?

Yes, it is always a collaboration. Dorian comes to me with these grand ideas and then lets me run wild. There have been a few times where I go a little too wild and they have to reign me in, but usually not. As you know, Dorian is Flamboyant and that's that beauty of building this relationship over the years and creating all these different looks. I can go wild.

What are your thoughts on the current state of diversity in beauty?

It's funny, I'm noticing this big trend on wild, out of the box looks that are really bold and I think it's a push back from seeing the same damn looks over and over again on Instagram. I think there is a time and a place for all of it, but I do find myself getting bored, so seeing this new trend makes me happy. It seems the younger generation is really pushing the boundaries and asking, "What is beauty?" I think it's [about asking], "What makes me happy," not what looks beautiful to everyone else.

"I think it's [about asking], 'What makes me happy,' not what looks beautiful to everyone else."

What are some of your favorite beauty brands and products?

My top two foundations are MAC face and body, and Kevyn Aucoin Skin Etherialist. The texture is so creamy and makes people look like they have perfect skin. I use Bioderma Micellar water and rose balm on everyone and make sure they are moisturized to the gods (moisture is the fountain of youth), so I'm constantly spraying people and myself with MAC Prep + Prime or Laura Mercier's Hydration Spray.

Pixi is also a brand that I love: both their makeup and skin care. They always have fun packaging and the skin care is amazing, especially for the price. And right now I'm obsessed with Lime Crime's Brushy Brow Precision pen.