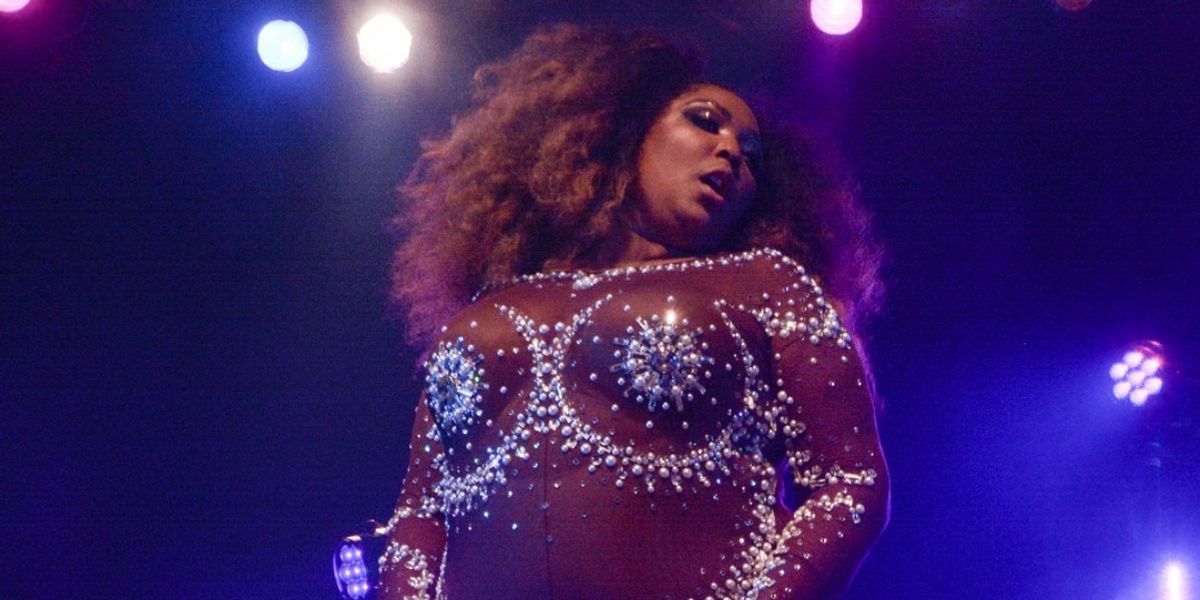 Should we have guessed that Lizzo's brilliant look at a NYE show in her hometown of Minneapolis was the work of Seth Pratt? Brooke Candy was on the bill, after all — Pratt's best-friend-muse, who's an everlasting ally in giving life to his earth-shattering creations. (See: Grimes' iconic 2012 "Genesis" video, and basically every Brooke Candy video ever).

This full-body jumpsuit for Lizzo, though, all shimmering with jewels, blissfully sexy, and ornately tassled with white feathers, is both extravagant and elegant; it doesn't scream Pratt right off the bat. What we know of the LA-based designer is primarily rooted in subversion: gritty punk twists on pop culture, over-the-top streetwear patterned by fetishwear and gaudy futurism. Even more surprising, it was Brooke Candy, the embodiment of all that, who styled Lizzo and her crew to ring in the night.

But this custom-made glamour for Lizzo is actually fully in line with Pratt's perspective; it's one of many looks he's concocted for the singer, starting with the dreamy wedding dress dream in "Truth Hurts," and there's been a clear mission in the same vein sturdily in place — always. Along with Brooke Candy, who's styled all the while, Pratt is set on glamorizing Lizzo to help elevate her message of body positivity and empowerment, and we're totally here for it.

Read our interview with Pratt — direct from Rome, where he was visiting his fiancé — below.

Let's start with the jumpsuit for Lizzo for New Year's Eve. The pink satin jumpsuit, too.

The process is kind of the same. It's like Brooke, and Lizzo's creative director Quinn [Wilson] — we all looked over references and came up with this nude illusion suit that's like Diana Ross back in the '70s, and then I kind of put a different spin on it. Because of the success of the pink jumpsuit I did for her, I kind of kept that same shape, but then dressed it up a bit differently. I make everything myself, and had one fitting with Lizzo on Christmas.

How has it been working with Brooke in a new capacity? Now that she's styling your designs, is it a different dynamic?

It is, but it also isn't. It's just all the things that we used to do for her, and now we're applying it to someone else. So we put it together, and we brainstorm ideas. It's usually organic with us. We're so connected. But I don't know, there's a thing that happens with me when I'm working on Lizzo's outfits — it's like an out of body experience. I'm actually making it, and then the end result... I don't even know how to explain it. It's almost like I'm not making decisions, but they're just kind of happening.

Do you think that comes from trying to create with Lizzo in mind?

That, and just I think, they say it takes 10,000 hours to make a master, and I've put in my 10,000 hours. The decision-making, I don't even have to really – I'm tapped into the creative energy of the universe. And Lizzo is my favorite project that I've ever done now because of her message. Before it was just like fashion, and with Brooke it was feminism and all that stuff, but the value of what we're doing with Lizzo is so real and tangible and you can see it. With her influence, it will help change the standards of beauty, and what's accessible for women and hopefully ease it up on them, even if just a little bit. That's what we want. And we set out to make her into a fashion icon for that reason, because we saw how talented she was, and how beautiful and confident she is, and she just needed to dress it up and glamorize and put it on a pedestal.

When did you start working with Lizzo? The "Truth Hurts" video?

Yeah, that was the first time.

I know you did the wedding dress; that was amazing.

I did the wedding dress and the lingerie.

I can see a difference; I've been a Lizzo fan for a while, and I can see what you just described in what she presents to people. I think it's amazing.

What she's doing is so clear and it's so positive and so powerful. A couple years ago we went and saw Dolly Parton at the Bowl, and she was dripping in Swarovski. And we were like, "Oh, this is how you make talent shine." It's bedazzling, it's beautiful, and that's what Lizzo needed. She needed to be glamorized. She needed to be treated like the queen that she is.

Are you going to be working with Lizzo throughout the year? Is that your focus for the coming months?

Are you going to be working on any side projects? Or are you that hyper-focused with Lizzo?

I'll be working with Brooke still. I've been working for 10 years, mostly with Brooke, almost exclusively for Brooke. Then Brooke brought in Lizzo, and we're kind of like family. And there's Charli XCX in there, but yeah, I have some other projects I'm working on but they're [on the] side — they're not even in the same realm.

I was curious about the paintings that have been popping up on your Instagram.

Yeah, I mean, that's just kind of my art, then a lot of times it has a message to it that's really political. I want to everyone to wake up, and I think people are, and especially in America, everyone is asleep.

Everyone's living a lie. It's amazing, once you realize what's actually going on, everything that you ever believed, anything — patriotism, sending men to war, like for what? You know what I mean? It's all bullshit. Everything. Religion, one man one woman, white picket fence, the dream, the fantasy, like what makes you successful — all bullshit. Money is bullshit, fame is bullshit. Money and fame are actually, once you get in there, actually really fucked up and dark; who actually wants it? Once you get it, you're trapped in it. It's so dark.

I get that from your work, even without knowing your background. But I know you had a conservative religious upbringing, and that you've been questioning things for a long time. I definitely see in your work; I especially like this Declaration of Independence image, and the caption you put along with it.

Seth Pratt on Instagram: “You can shoot me with your arrows but I will not bleed for you. Not even a drop. I decide where, when and what I bleed for. Live your…”

How do you reconcile — this is a complicated question — your breaking beauty norms and societal norms and empowering people through what you're doing with Lizzo. Aren't you buying into it by acknowledging it exists?

For me, you kind of have to use the weapons that they're using against us. You have to weaponize them in the opposite way. Society is fake, but it's also real, and I have to exist in it in order to fight it. I have to co-exist with it, but I don't have to be part of it.

Does it feel that way in Rome? You mentioned "especially in America." Are things different there?

It's kind of the same everywhere.

I mean, the whole world is corrupt. Government, all the governments. We need a revolution; I don't know if it will ever happen. But at the same time, I can empathize.

Is there anything else you want to mention about what you're working on?

I think also look out for Brooke. She's really trying something new with herself music-wise and visual wise, and I think it's going to be really cool. It's very political.

You'll be working alongside her as she goes through?

Always. She's my family. We're always going to be together.