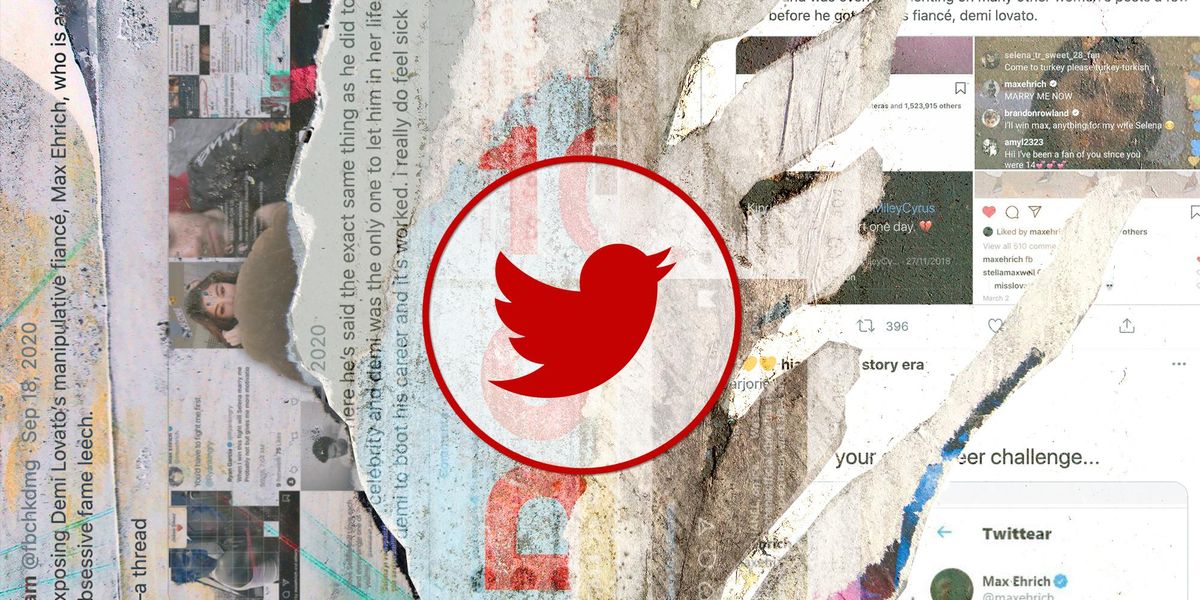 Among Lovatics, the devoted fans of pop star Demi Lovato, "Max" and "Ehrich" are two dirty words. The daytime TV actor and wannabe musician, whose celebrity status rose when he became briefly engaged to Lovato last year, deserves his post-break up return to irrelevancy. As Lovatics would have it, he only ever dated their queen for clout. And there are hard drives full of receipts to prove it.

In late 2020, three British teenagers from the Lovatics community helped take down Ehrich (net worth: $2 million) before he and Lovato (net worth: $40 million) went through with their marriage. What follows is a story of starfucking and screenshots that suggests we should all be so lucky to have our boyfriends vetted by Twitter. It reveals the scary sophistication of social media standom, as well as the relative downsides to being rich, famous and isolated from ordinary life.

Lovato and Ehrich's doomed romance began in mid-March of 2020, just as the former Disney Channel star's life shut down alongside everyone else's. To outsiders, things looked promising. Having recovered from a near-fatal overdose two years prior, Lovato was sober, back in the studio and singing the national anthem at the Super Bowl. Her new relationship came as a surprise — during an Ellen appearance on March 5, she claimed to be happily single — but the couple seemed ecstatic to be quarantining together at Lovato's parents' place two weeks later. Their families reportedly approved. Ehrich proposed in July.

On Twitter, where Lovato's most loyal followers gather under sparkly avatars of her face surrounded by emoji butterflies, the DMs were lit. "The relationship was fishy from the start," recalls Courtney, a 19-year-old pop obsessive from Manchester who has been promoting Lovato online since 2015. "As stans, we want the best for Demi. So I started doing some investigating."

Courtney was joined by Lia and Nylah, both 18 and from Yorkshire. Exchanging information on a larger, since-deleted Lovatics group chat, the trio speculated that Ehrich was using Lovato to grow his fanbase and launch a music career. He appeared to have first gotten Lovato's attention by feverishly commenting on her Instagram posts from his blue checked account, having previously been spotted in the comments section of several other young female stars using the exact same attention-grabbing technique.

The Lovatics decided something had to be done. In mid-May they went straight to the source, calling out Ehrich in his comments section and even privately messaging him. "He was deleting my comments of where I mentioned his weird behavior," Lia recalls. "I then went into the DMs, and before I had even finished typing it all, I was blocked. Instant alarm bells there. Straight away [he was] trying to hide it all."

As Lovato and Ehrich continued to post gushing tributes to each other over the next few months, in-the-know stans began to panic. Ehrich seemed excited by his enlarged follower count, and had a tendency to go live on Instagram with Lovato in the background or sleeping next to him, seemingly unaware that her private moments were being broadcast to hundreds of thousands of curious fans.

"When Max had started going live while she was there and 'accidentally' getting her in [the shot], it was starting to get weird," says Lia. "It wasn't like a one off and just being cute. It got really weird and invasive quick. He started showing her when she was asleep, tweeting about her and deleting within seconds." One video captured a private conversation between Lovato and her makeup artist. "At one point you could hear her saying something along the lines of 'Baby, who you talking to?' and it ended. Like, she was clueless."

Lovato, as Dancing With the Devil makes clear, has experienced a more tumultuous kind of fame than most. After a decade of troubles, Lovatics felt protective of her newfound stability and exciting new musical era. There was no way they were letting a random Netflix actor get in the way of Demi's rebirth: it was time to raise the alarm.

On September 11, Nylah posted the first round of Ehrich screenshots on Twitter, showing him posting flirtatious comments on the selfies of Madison Beer, Gigi Hadid and Bella Hadid just days before he and Lovato officially started dating. The aim was to prove that Ehrich's fire emoji flirtations with Lovato had been purely opportunistic. "Max is using Demi to boost his career and it's worked," she captioned the thread. "I really do feel sick."

Lovatics also circulated screenshots that showed the extent to which Ehrich was an obsessive follower of Lovato's longtime rival Selena Gomez. It's not a crime to enjoy the musical stylings of Gomez; if that were the case, call the cops and arrest half the world's population. But she and Lovato have a strained history. As a committed stan, you're unlikely to support both of their careers at once.

Old tweets appeared to show that Ehrich was well aware of this dynamic, to the extent that he'd actually declared his allegiance to Lovato's rival. "Hahaha selena gomez and Demi are cute together but boy if you think Demi is prettier.. you're WRONG!" he allegedly tweeted in 2010. Another unconfirmed tweet from 2015: "There's a female singer that screams so much, that's why my girl S is better than you know who." Old posts on Ehrich's Instagram even appeared to reveal an "S" tattoo.

Ehrich's interest in Gomez went way back. Over the years he had become so well known to Selenators that some of Gomez's stans actively "shipped" him as Gomez's beau, fantasizing about what the two would look like as a couple. In 2018 one Gomez stan created an entire Instagram, @maxlena_forever, devoted to a speculative relationship, complete with jankily photoshopped photos (known as "manips") of the two lying in bed together. Alleged screenshots saved to the account's highlights show that Ehrich hit follow and even exchanged excited DMs with the admin.

Lia, who has no beef with Gomez and says the rivalry between the two women is mostly "made up," nonetheless found Ehrich's Selena obsession disturbing. "He would stalk Selena," she says. "He'd tweet about wanting to marry her, liked manip edits of him and Selena, he shared his number on Selena's Instagram Lives and even went live with Selenators, which came off obsessive and creepy to a lot of people."

#MaxEhrichIsOverParty max ehrich is a creep that has tried to get famous women’s attention for years (especially se… https://t.co/BIirA5z5Xy
— 𝐥𝐢𝐚🦋 (@𝐥𝐢𝐚🦋)1600047442.0

Likely preoccupied with Justin Bieber and The Weeknd, Gomez never responded to Ehrlich's many attentions. Over time, Ehrlich appeared to move onto other targets, Lovato among them. Longer Twitter threads, posted by Lia from her main account on September 13 then a burner handle on September 18, made a convincing case that the actor had considered Lovato just one of many possible A-lister hookups who could help increase his profile.

Finally acknowledging the controversy in the final days of September 2020, Lovato blasted the screenshots as a cruel case of Photoshop. This wasn't a particularly extreme case of denial: pop stans are known for creating fake drama, and it wouldn't be the first time that Selenators had tried to make Lovato look like a fool.

By the end of the month, though, Ehrich's less-than-pure intentions were being reported in the media. While Lovato has never outright admitted that the efforts of Lovatics led her to break off the engagement, she and Ehrlich were over within days of #MaxEhrichIsOverParty triumphantly trending on Twitter. Ehrich would go on to claim he heard about the break up through the tabloids, then stage a series of bizarre photos of himself crying on the beach.

Courtney was among the first to hear that the engagement was off. Her characteristically obscure source? A sparsely-attended promotional Zoom event organized by Lovato's mother for her husband's musical client, the musician George Navarro. "We had our intuitions that they broke up, as Demi wasn't wearing her ring," she says. "So I asked [during the Zoom] and [Demi's mom] Dianna confirmed it."

Pop stans tend to get carried away with borderline conspiracy theories. Terrifying as the alleged Ehrlich screenshots seem, it's entirely possible that many of them were fabricated (although Courtney, Lia and Nylah claim that they took the vast majority themselves, rather than trusting outside sources), that Ehrlich's official accounts were hacked or that Lovato actually had some knowledge of Ehrlich's past Selena Gomez obsession and wasn't particularly bothered by it.

We do know for sure that a degree of blindsiding occurred."I realized as time went on that I didn't actually know the person that I was engaged to," Lovato explains in a confessional about the relationship for her new YouTube documentary, Dancing With the Devil. "The hardest part of the breakup was mourning the person I thought he was."

But Lovato should still be given some credit. Chances are, she would have figured Ehrich out without the Lovatics' help. Famous for her entire adult life and much of her childhood, the pop queen has encountered plenty of clout chasers in her time, and identified them as such. In 2016, she very publicly chastised a celebrity obsessive known as "Stalker Sarah," labeling her a "20-year-old fame leech" and requesting that she "get a job" instead of following her around. A plausible source of inspiration for the Max Ehrichs of the world, Sarah had a penchant for chasing celebrities for photos and harassing them on social media, earning a sizable following of her own in the process.

Lovato is doing great these days, and has notably embraced her queerness post-break up. And lest you worry too much about Ehrich, who was unresponsive to multiple requests for comment, the actor appears to have recovered from that coastal breakdown rather quickly — even releasing music without Lovato's help.

The Lovatics, who on some level must realize that they share a few tendencies in common with the social media-addicted, pop music-loving actor, have no interest in continuing their campaign against him. "I feel relieved that we don't have to deal with Max's creepy ass anymore," says Lia. "I hope he has a nice life though I guess."