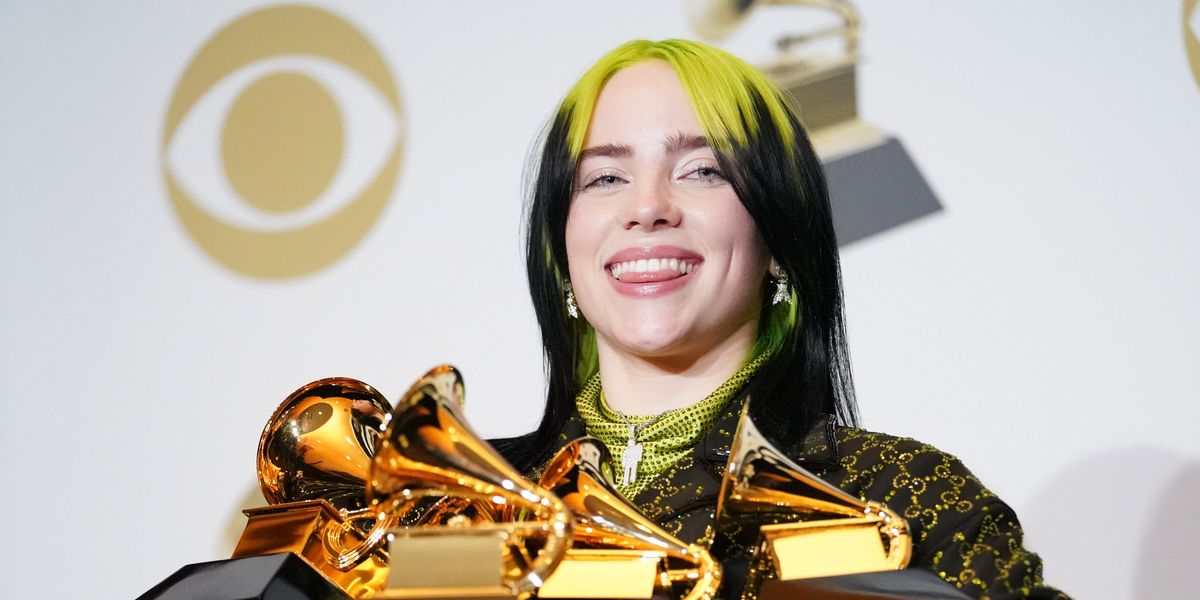 Billie Eilish, the industry's most ubiquitous dark-pop phenom, is now a certified Grammy winner. Five times over, in fact (she was nominated for six at last night's show). The fact that she's just 18 and accomplishing such career milestones already is both envy-inducing, and historic! She's officially the first female and youngest artist to sweep the general field categories and the youngest solo act to win the prestigious Album of the Year award.

Eilish should've brought a broom with her onstage as she cleaned up, or perhaps just moved her seat closer to the stage: Best New Artist, Record of the Year and Song of the Year for her Number One smash "Bad Guy," and Album of the Year and Best Pop Vocal Album for her multiplatinum debut, When We All Fall Asleep, Where Do We Go?. And she also should've brought handkerchiefs for the audience as she performed "When the Party's Over," one of her 13 platinum hits. I mean:

The big wins cap off a landmark year for Eilish, who hit all the marks of a world-dominating pop star du jour, including headlining Coachella (20 minutes late, no less! Chic!), performing upside-down on SNL, launching merch lines with major retailers like Urban Outfitters and using her influence to speak out about everything from her own mental health struggles to climate change. With a world tour and "experimental" second album forthcoming, Eilish is clearly poised to dominate 2020, too.

Another award shoutout worth noting: Eilish's older brother and sole collaborator Finneas, who accompanied his sister onstage and won the Best Producer of the Year, Non-Classical award. This is excellent for a couple reasons: 1) the family that slays together, stays together, and 2) it only reinforces what more rising label-free musicians have been practicing in the era of streaming/independence. Though Eilish is signed to Interscope, it's clear she and her brother have creative control of her output. The fact that they split songwriting and production duties between just the two of them and create award-winning brilliance is the cherry on top. Plus, they're probably both so rich by now, so there's that.

Anyway, winning so many awards was probably a lot for Eilish because when she took the stage for Album of the Year, she said to a room of her famous, accomplished peers: "Please. Sit down." And... they sat! Her power! She also said she believed fellow nominee Ariana Grande (Thank U, Next) deserved the award. Her humility!

It's worth mentioning that Finneas and Billie's other speeches were similarly earnest and brief. By Record of the Year, they'd run out of expressions of gratitude, as a weepy Billie and Finneas leaned in close to the mic and uttered just two effective words: "Thank you."