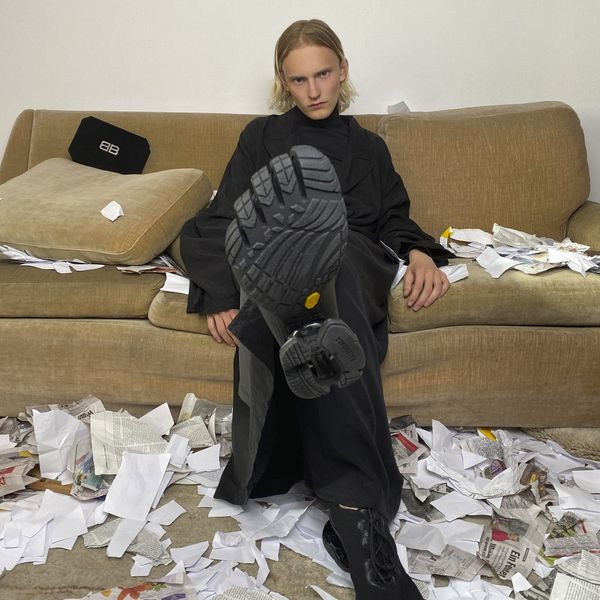 We are currently living in an "ugly" fashion renaissance right now. Bootcut jeans are back, everybody and their mother is still rocking a bucket hat and Crocs have gone from being ironically cool to just flat out cool with recent collaborations including Bad Bunny, Justin Bieber, Chinatown Market and the Grateful Dead. Thanks to the age of post-irony that has finally caught up with the industry, the boundaries between "low" and "high" fashion have never been more blurred but if that is the case, where do we eventually draw a line in the sand? Cue, Demna Gvasalia's Balenciaga.

Under the leadership of Vetements founder, the storied French label has become one of the fashion world's biggest trolls. Particularly, the brand's footwear has repeatedly made quite a stir from spearheading the chunky Dad shoe trend with their Triple S sneaker to sending platform Crocs down the runway (they even made a square-toed mule that pretty much looked like you stuck your foot in a McDonald's French Fry carton) so it probably won't come off as that big of a shock that Balenciaga's latest is turning a few heads but this time, even Gvasalia may have gone a bridge too far.

Set to go on sale October 16, Balenciaga's Toe collection presents two new sneakers and a high heel that all feature a split five-toed sole. A collaboration with the Italian brand that originated the individually-toed design, Vibram, the distinctive show was originally geared towards providing a more tactile walking experience and was made popular by climbers and your Dad's weird work friend who always claims to be training for a marathon but is actually more obsessed with having the best gear than actually competing in a race.

Fittingly, the footwear collaboration was first debuted earlier this year at Balenciaga's Fall 2020 presentation which thematically centered around dystopia and the impending climate apocalypse. In keeping with that narrative, we can maybe understand the five-toed monstrosity as being Gvasalia's vision of socialites and influencers outfitting themselves for the end of days, fleeing a flooded 5th Ave and trekking across the countryside to their luxury doomsday bunkers. Perhaps, in the same way that coronaviruses have made face masks a staple of all of our wardrobes, climate change will somehow precipitate a need for everyone to have freaky frog-toed shoes?

Frequently on this site we have defended and even championed some of the most arguably questionable garments as being valid (Croc gloves, inflatable latex trousers, sculpted genital handbags, brokinis, etc.) but this time, Gvasalia, really isn't making it easy. There is clearly a market for five-toed shoes considering Vibram's continued success with the design (they've even patented it as the FiveFingers shoe, and the implication that toes are merely the fingers of the feet is its own disturbing can of worms that we don't have time to get into here) and thanks to hype culture and Balenciaga's dedicated following, the limited edition release is almost guaranteed to sell out but that doesn't automatically make them chic.

Unlike the universal appeal of a clog, a sandal or even an open-toed pump, it takes a highly specific kind of person to pull off a five-toed shoe. Just as any garment reveals a certain something about its wearer, Balenciaga's digit-focused freak show broadcasts to the world that you consider toes to be the stars of the feet, but are worthy of being individually highlighted to the world by way of a reinforced foot glove. Nice try Demna, but if you want feet pics, you have pay for them just like every one else.