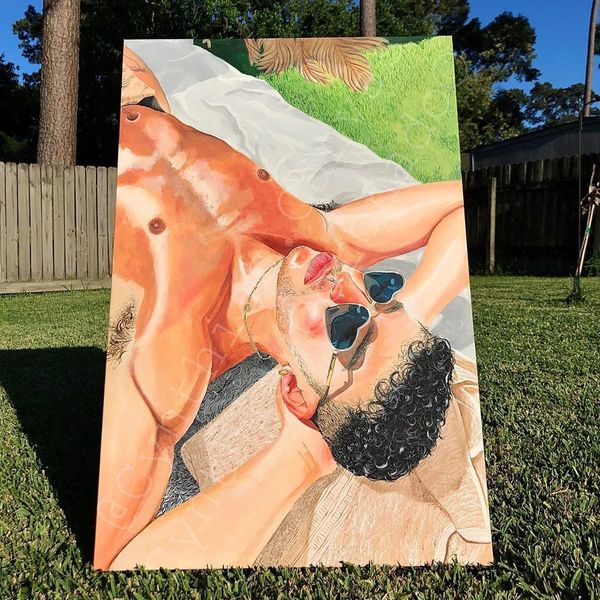 Bad Bunny's standom is booming. Being too cool for one, they don't have an official fandom name. But pages like @badbunnylaperla, @badbunnytb and @sanbenitonetwork deliver constant dispatches on Benito Antonio Martínez Ocasio's every move. Whether they're OG disciples from his mixtape days, or recent converts thanks to his global dominance, they have their work cut out for them. The trap king has become more shippable and streamable with every album, video, award show look and broken chart record. Lately, they're booked and busy keeping up with the rollout of new album YHLQMDLG — like his drag-filled "Yo Perreo Sola" music video — and increasingly hot takes on politics.

Cynthia Coronado isn't your average Bad Bunny stan. For one thing, the 22-year-old Houston artist is mostly offline. Bad Bunny also plans to purchase a nude painting of himself that she made. Who else can say that?

Paper Magazine on Instagram: “#BadBunny buying his own nude is high art and exactly what I’d do if I had money and looked like him... #linkinbio for the fully story if…”

Coronado has been a Bad Bunny fan for years. She doesn't count herself as a part of the standom due to her offline status, but that doesn't mean she's not dedicated. "I would do everything I could to support him and his work," she tells PAPER. She only made a Twitter this month to post her artwork. After being laid off from her job at an auto shop due to the COVID-19 pandemic, she's been using her spare time to paint and found one particular image of Bad Bunny, a sun-kissed thirst trap he posted last month, understandably... inspiring.

She shared the final piece on Monday. Hours later, Bad Bunny was in her mentions, exclaiming: "Yo lo quiero," and asking if $5,000 was enough for the painting. They haven't worked out the details yet, but in all likelihood, Coronado's painting will soon be hanging in Bad Bunny's home for him and his (post-quarantine) guests to admire.

PAPER caught up with Cynthia over email to hear about the moment she saw The Tweet, past celebrity art exchanges and her favorite part of Bad Bunny to paint.

So, walk us through the aftermath of Bad Bunny's tweet. How did you feel?

This is going to sound corny... but this is exactly how it went down. I was on a FaceTime call with my family in Mexico. When I got the message saying, "Cynthia he saw it," I saw the message, but wasn't sure what it was referring to. I continued my conversation, when suddenly my phone would not stop with the notifications. I headed to Twitter and could not open it. My phone had frozen! But I looked at my sisters and you could just see the excitement in their face! That's when I put all the pieces together. My heart dropped! I was super shaken up and just had a mixture of excitement and joy running through me. Then after that my sister on her phone shows me the Tweet... " yo lo quiero..." HE WANTS IT. A bit of happy tears came rolling after that.

How long have you been painting?

I started painting just as an elective when I was a freshman in high school. I ended up loving it and have been painting since then.

Did you make this painting more because you thought Bad Bunny was an interesting subject to paint, or because you're a big fan?

I am a big fan, but that was not the reason I decided to paint him. My sister and I were just relaxing one day, and he so happened to post those images. I really admire Bad Bunny as a person, for his aesthetic and that is what drew me to the image. It was a "simple" image, but honestly there were many shadows, colors, and fine details that really were captured through it and that was what led me to deciding to paint it.

Do you make a lot of fan artworks of your favorite artists/celebrities?

Yes, many of my paintings are of artists. I actually got the opportunity to do a meet and greet with Mac Miller before his passing and I did two artworks of him on the back of two jackets. He kept one and I got to keep the other one, with his signature and a message that said, "Cyn, This is beautiful Keep going!" I also was recognized, on my old Twitter account that's been deleted, by Post Malone. I am currently working on a collection of Latin artists. Benito was the first piece.

How long have you been a Bad Bunny fan?

I have been following Bad Bunny as an artist since 2016 when the song "Diles" with Ozuna and Farruko came out. It has been some years now and seeing him grow has been amazing. He deserves all the recognition and support that he has. The fact that he not only shares music and an image with his fans, but also the personality that comes with him is something that stands out a lot to me. I recognize that he isn't afraid to break boundaries and go out of the typical norms of a man. Seeing him be admired not only in the Latin community, but also worldwide motivates me personally.

Would you consider yourself a part of the Bad Bunny fan community? If so, what is that community like?

Until recently, I was not involved in social media. In my opinion, in order to be in a "fandom," I think it is necessary to be very involved with other fans of the artist. Therefore, I never really got to experience the fan community. That being said, I consider myself a big fan. I would do everything I could to support him and his work.

Why did you choose this particular shot of Bad Bunny? How long did it take to make?

As mentioned before, it was an image that really stood out to me due to the details that came along with the simplicity and I mean... come on, look at that picture! It took me about a week. Not from morning to day, but a couple hours each day.

What was the most fun feature of Bad Bunny to paint, and the most challenging part?

The lips were my favorite part! To capture the dimensions, angle, and color to capture them was something that stood out to me. Also, the reflection on the glasses was something I never really did before. The most difficult... definitely the abdominal area. Although it may just look like brown, white, and "tan" paint here and there. It is truly thousands of layers of different colors. Skin is not just one color!

Related | Stan Stories: The Ups and Downs of Loving the Jonas Brothers

As you were making it, did you hope he might see it?

When making the piece... no, it's something that crossed my mind. I recorded strictly for the purpose of seeing the process. As I started painting, I did realize that I want to share my work. My sister, Fabiola, who knows more of social media recommended I make accounts. That being said, who doesn't hope that the person you painted sees your work and recognizes you for it? Even with tagging him, I did not think he see it due to thatI had about ten followers on Twitter at the time. But my sister retweeted it and that amazing power of Twitter and his supporters is why I think he saw it! NEVER IN A MILLION YEARS would I have thought Benito would have offered to buy my painting.

To be clear, has Bad Bunny actually bought the painting yet? How did that go down logistically?

Officially, no. Haven't heard from anyone yet, but hope to soon!

I saw you plan on making prints. Where can people buy them when they're available?

I will be making some soon! I did not expect it to blow up the way it did, especially not this fast. I am currently working on my website and will have it up and running this week! If people are interested, I have just recommended people follow me on my social medias. I will be posting all the details.