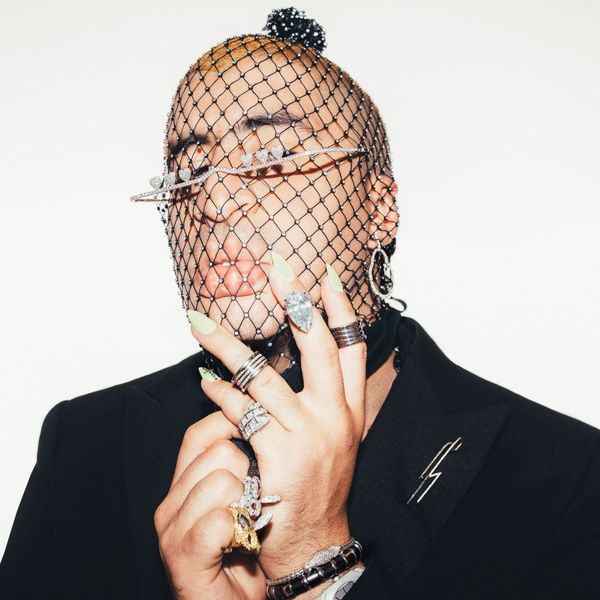 Ahead of today's presidential election, Lady Gaga has been hitting the campaign trail hard for Joe Biden. Last week she revived some of her most iconic looks, including the meat dress, in a PSA encouraging people to vote. Just yesterday, on the eve of the election she joined the former Vice President in Pennsylvania, giving a speech and performing "Shallow" and "You and I" at a rally. The last minute push clearly got under Trump's skin given that he went after her, Jon Bon Jovi, Jay-Z and Beyoncé at rally of his own only a few hours later which is always an added bonus. It's way too early to tell if Gaga's appeals helped encourage more voter turnout but it's safe to say that it looks like she at least managed to convince one person so far.

Bad Bunny was spotted earlier today in Puerto Rico today casting his vote in the territory's gubernatorial election sporting a Lady Gaga shirt, the Urban Outfitters-exclusive Chromatica tee to be more precise. Undoubtedly trying to fly under the radar with a more subdued look than we've come to expect from him, Bad Bunny is seen rocking the t-shirt along with a bucket hat, sunglasses, mask and his recently released Crocs collab which ultimately ends up being a dead giveaway.

It's certainly not the first time Bad Bunny has publicly professed his love for Gaga. The Latin trap artist previously revealed that he was introduced to her music through drag and his cousin who was a performer. "He would come to my house so I could make his mixes," Bad Bunny said in an interview. "He explained the choreography to me. They were all Lady Gaga songs."

And though, despite being a territory of the United States, Puerto Ricans aren't able to vote specifically in the US Presidential race, this will be the first election since former governor Ricardo Rosselló resigned last year after 990 pages of private chats containing homophobic and misogynistic content were leaked sparking weeks of protest. Bad Bunny was among those that called for Rosselló to resign, stopping his tour to join the protests. At the time he wrote on Instagram, "My respects to everyone who's had the courage, valor, and initiative to go out in the streets and fight for our country," a sentiment that still feels urgently relevant today.