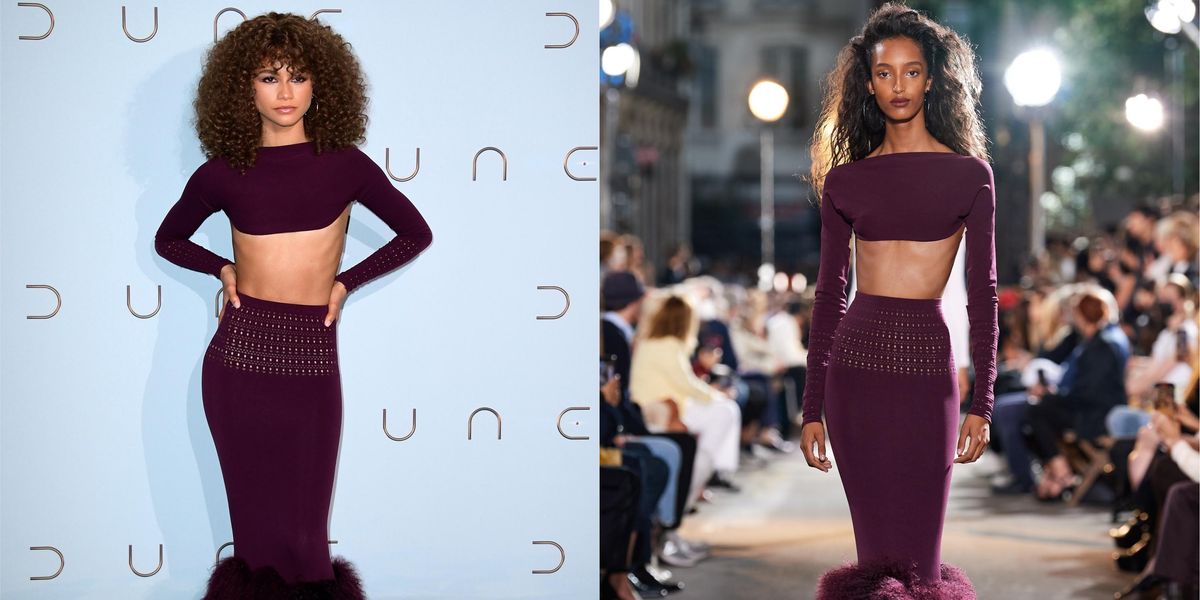 Zendaya is having quite the week in Venice, where she's been promoting her new film Dune alongside Timothée Chalamet. After going viral for two show-stopping looks — a Valentino Haute Couture dress and tuxedo jacket as well as a custom molded Balmain dress — the actress also scored her first British Vogue cover.

Her latest look is perhaps the most significant of her movie press tour yet: an aubergine cropped perforated knit bolero and matching mermaid skirt with Mongolian shearling trim, which she wore to the film's Paris premiere. It was Look 15 from Alaïa's Spring 2022 collection that debuted during Paris Couture Week in July, the first under new creative director Pieter Mulier and the first since founder Azzedine passed away in 2017.

The look was practically made for her, as many observers and commentators noted (and manifested) when it first stepped out on the runway this summer. It's the first from that all-important Alaïa collection to be worn by a celeb, all thanks to stylist Law Roach's incredible eye and pull power. (The look was paired with Jimmy Choo heels.)

Apparently, Doja Cat's stylist Brett Alan Nelson was one of the no doubt many who tried to borrow this look from the brand's PR team. "I was begging for this dress. Now I know why it wasn't available - SHE LOOKS SO PERFECT as always," he commented on Roach's Instagram. And I'm sure everyone can concur — this was simply the only choice.

Photos via Getty/ Courtesy of Alaia