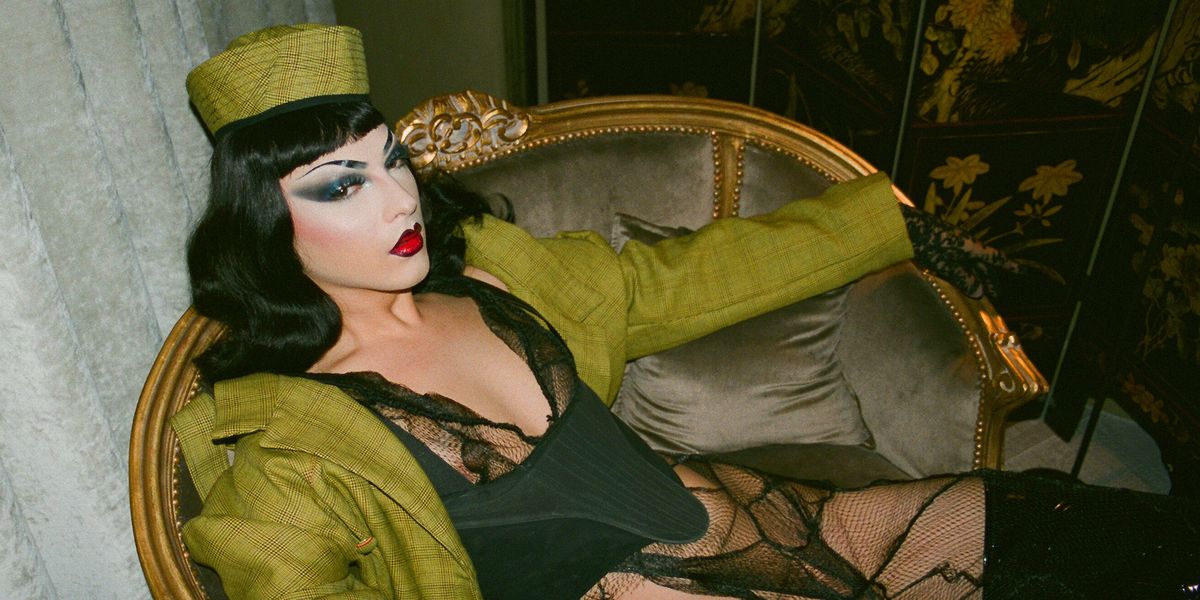 Getting famed drag queen and burlesque dancer Violet Chachki to model your first collection out of school is not an easy feat. But for Luis De Javier, a young Spanish designer and recent graduate living in London, the stars managed to align through a stroke of luck, sheer talent, and a budding friendship with the RuPaul's Drag Race winner.

PAPER caught up with the designer, who is working on his Fall 2020 collection to be shown at London Men's Fashion Week in June, to learn more about his background, design process, and relationship with Chachki.

How did you get started out in fashion?

I have always been obsessed with fashion — you know the usual dressing up the barbies — and sketching since I was a little kid. Sadly, Spain isn't a particularly open-minded country, so I put designing aside through my teenage years. I was kind of ashamed. It wasn't until I moved from my little coast town to Barcelona, ditched studying marketing and went to fashion school that I started living my fantasy. Fashion school was honestly tough. I didn't even know how to thread a fucking needle, but I picked it up.

What happened after you moved to Barcelona?

Moving to Barcelona was the best thing I could have done. I had always been very curious about the nightlife there and finally I was experiencing it. I was going out a lot. I was experiencing the whole rave underground scene, which were basically squatter raves. My whole design perspective started changing from that point onwards — my inspirations and silhouettes. This all developed as I was studying and concluded in what was my graduate collection last year. I was confident about me, my sexuality and did not give a fuck. That collection was named Über-Puffed Sexuality and was a social critique towards the LGBTQ+ phobia we experience nowadays as queer kids. I feel like it was just the start of my true creative process.

What sort of work experience did you do after university?

Once I finished school I knew exactly what I wanted to do: get the fuck out of Spain and move to London and try to work for my icon, Vivienne Westwood. I ended up interning in the studio for her and Andreas Kronthaler's collection, and it was a great experience, made some great contacts and finally felt like I was actually that bitch trying to make her place in the industry. After working for Westwood I got the chance to work in Gareth Pugh's studio, which was also one of my icons since my teenage years. Working at his studio really pushed everything I knew in terms of technique I had never done so many math calculations in my life.

How would you describe your work and design approach?

What I portray with every garment is the true decadent and obscure feeling behind the glamorous and extravagant lifestyle that all queer kids desire to live. It is somehow my declaration of admiration towards it and my bold critique on its façade. I try to stay true to what queer kids did back in the days in order to impress everyone at the club. Each look comes from one or two pieces that are the sources of inspiration, such as fruit packaging and my grandmother's clothes, which inspire most of my looks.

What kind of prints do you work with?

I transform the metaphor into a physical print. Developing all my prints from my sketchbook collages — eye catching, sexed up, layered photos that complement the garments. Sometimes they end up being quite flat, which is why most of the prints are in sustainable leather that I burn and then transfer an image. [This makes] it seem like it's fading away, giving a kind of dirty and faded feeling to fit the true inspiration better.

How has living in London helped you personally and professionally?

Moving to London less than a year ago has honestly been the best decision I have made in my life. I truly blossomed and morphed into my final fag form. I started meeting all these creatives that I had never imagined being surrounded by in Spain; Betsy [Johnson], who shot and directed this shoot with Violet, was one of the first people I met in London. Meeting all these people is what actually gave me the chance to debut in London Fashion Week this past September, which was something very unexpected.

How did you and Violet come to meet and be friends?

We started following each other on Instagram less than a year ago. I had always been obsessed with her since I saw her on Drag Race. I remember I would always make my mum watch it with me and the only one that would make her gag was Violet. We met up before this summer when she was in London for a gig. We had a quite boozy afternoon and ended up talking shit for hours. After that we talked about doing something together since she really liked my designs, but it wasn't until this past September that I hit her up about finally shooting her in my pieces and she was down. I've got nothing but love for her.

Can you talk more about the clothes Violet is wearing in the shoot?

What Violet is wearing was based on garment construction, in order to create distorted silhouettes emphasizing the waist and showing skin to portray the Über-Puffed Sexuality of the looks. I wanted to create two jackets with really bold shoulders that had a corset incorporated in them. [There are] two complete looks in sustainable leather that I handprinted with one of my collages and produced them in Spain just a week before the shoot. The red mesh top and black mesh jumpsuit is actually made from fruit packaging, which I draped, sewed by hand and then embroidered. These leather pieces joined with unconventional materials needed a suit to go with it; that's where the deconstructed tailored jacket comes in, topped with a sailor hat in the same wool fabric which was dyed to saturate its color.