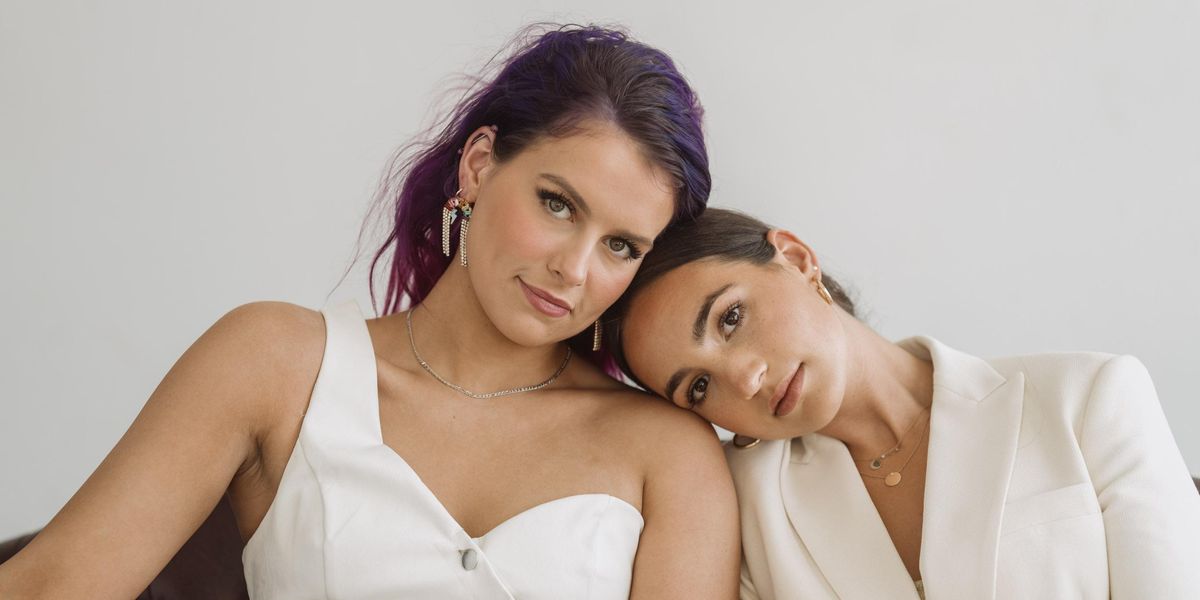 'Tis the season, dear reader, of the Bridgerton obsession. Make haste — though do be warned, there are mild spoilers forthcoming.

After the Netflix show's high-society social season drama graced our screens at the end of last year, Abigail Barlow and Emily Bear set out to answer the simple question: What if Bridgerton was a musical? Now, with #BridgertonMusical hitting more than 200 million views on TikTok and with 48 million likes between them, Barlow and Bear have releasedThe Unofficial Bridgerton Musical, a concept album based on Bridgerton's first season.

All over FYPs in January, the musical collaborators have proven themselves to be more than a TikTok flash in the pan trend. Like its TikTok musical predecessor Ratatouille, it wasn't long before Bridgerton's musical prospects became the talk of the app. With the blessing of the show's cast and crew, the songwriting duo was unstoppable. Writing, producing and recording 15 original songs for the album, Barlow and Bear's The Unofficial Bridgerton Musical is as binge-worthy for the ears as Bridgerton is for the eyes. The album is sure to feed your Bridgerton cravings as we await Season Two.

"We were both a little frustrated in our solo careers, looking to switch it up and do something different," Barlow tells PAPER on the origins of this unique project. Turning to Netflix for songwriting ideas, the pair stumbled across Bridgerton, a show they believed was destined for the stage. "We're both extremely obsessed and love the world they created, it had me buzzing with inspiration," Barlow says.

THIS IS THE MOST FUN IVE HAD WRITING IN A LONG TIME! Also can we talk about @emilythebear ? She’s the yin to my yang✨ #bridgertonmusical #fyp

A piano ballad originally named 'Daphne's Song,' now a dreamily orchestrated track retitled "Ocean Away," was the first musical number of Barlow and Bear's Bridgerton project. The song explores Daphne and Simon's escalating emotions as they fall for each other amid their romantic ruse. With a growing audience craving the regency musical and song ideas still coming, Barlow was keen to ride the wave they'd created: "Because [the concept album] came from a place of wanting to try something different and step out of the box I had been in, immediately when we hit a stride I texted Emily, 'What if this was a full project?'"

A full project it quickly became. Not long after "Ocean Away" came "Burn For You," "Alone Together" and "The Ruse," which pluck dialogue from Bridgerton and seamlessly interweave poetic lyricism with soaring strings to orchestrate Daphne and Simon's blossoming attraction. Elsewhere, "If I Were A Man" gives the perspective of Daphne's younger sister, Eloise, as she articulates her frustration at the restricted societal position of being a woman. "Balancing The Scales" is an emotional ode to motherhood from the Bridgeton matriarch, Violet, a track Bear remarks came to them pretty instantly considering they were "channelling a 50-year-old woman." "Entertain Me," the Queen's angelically harmonized solo, was a track the pair remember as one of the most satisfying to write. As Barlow explains, the song "was a bit of a challenge at first but once we honed in on [the Queen's] voice it all started to fall into place in a perfect way."

Their creative liberty when it comes to the fiddly process of translating TV to the stage informed their channelling of these supporting character's solo perspectives. Bear notes "the beauty of writing in the musical theater world is that you're able to put yourself in so many different shoes and write from different perspectives. Sometimes when you're writing for yourself, you get put in a creative box so to be able to lose all that inhibition and write how this person would think, not necessarily how you think, made us more creative."

On the topic of their working process, Barlow and Bear remark that their differing musical backgrounds became a key advantage to their collaborative ease. "We work so well together. Regardless of whether I learn more of the melody and lyrics and Emily leans more towards the music, it's always this brilliant collaboration," Barlow says, comparing working together as "a really intricate, beautiful puzzle."

For context: Bear has had a rich career as a renowned composer and piano prodigy since the age of five, having been honored in the Songwriters Hall of Fame. Meanwhile, Barlow was a founding creator on TikTok and has a flourishing singer-songwriter career with the chart success of her independently-released pop hit "Heartbreak Hotel." Although individually accomplished, together the pair are breathing new life into what we understand to be musical theater with The Unofficial Bridgerton Musical's merging of Broadway influences, contemporary scoring and a pop through-line.

While The Unofficial Bridgerton Musical is impressive in itself, Barlow and Bear's creative process ushers in a new-founded feat: live streaming on TikTok and Instagram to involve their audience in every step of creating this album. Demystifying the creative process with real-time live-streams documenting their lyrical workshopping, orchestrating and recording sessions, the duo were surprised by the interest in their behind-the-scenes progress. "We weren't expecting people to enjoy watching us write for 4 hours straight or struggle on a verse for an hour," Bear says. "I think creators lose sight that most people don't know what it means to write a song or a musical. For someone who had no idea what the process was like, they found it interesting."

It seems Bear hits the nail on the head; thousands tuned in to watch the pair build a musical number based on a theme, character or a quote from the show during live streams that provided precious insight audiences aren't often privy to.

On their decision for The Unofficial Bridgerton Musical to initially exist on TikTok, Barlow adds that "the community and audience really does have the power over what is popular and what is successful, which gives talented people an opportunity to showcase their talent in front of an audience who wants to listen." The community-driven accessibility of TikTok also offered their creative endeavor a platform on which the pair could gauge the popularity of every song, down to each lyric, from the immediate feedback of live stream viewers.

This connection between artist and audience becomes especially important considering Barlow and Bear's young fan base paired with the theater industry being notoriously difficult to get a start in. Barlow shares such thought: "Musical theater can be elitist and closed-doored, curtain drawn. We decided to throw open those curtains and say 'hey, this is what it is, it's not this big scary thing, you can do it too.'"

At 20 (Bear) and 22 (Barlow), the pair are two young women who have independently carved out their own space in the musical theater world. This is a rarity. Take last year, for example, when women made up just 20% of songwriters and 13% of producers. As Bear expresses, "Especially [with soundtrack composing] in the film, TV and theater industry, the lack of women is still surprising to me."

Bear has publicly raised awareness and spoken out on this stark gender gap. "In that same merit, we're showing young women via social media and TikTok that you don't have to be a 60-year-old white man to compose a Broadway show," Barlow notes. "You can be young, driven, really ambitious, who just want[s] to make music and use social media as a way to get your foot in the door in this business."

While The Unofficial Bridgerton Album predominantly features vocals from Barlow, the duo have their dream ensemble in mind if Bridgerton ever made it to the musical theater stage. Bear's answer comes instantly: "I'd have Audra McDonald as Lady Danbury and Cynthia Erivo for the Queen." They also agree that Barlow would make an exquisite "purple-haired Daphne."

Bridgerton has taken Barlow and Bear's talent to a global scale, but Barlow assures us that "Bridgerton is not the last you'll hear of us. We have lots more stories to tell."