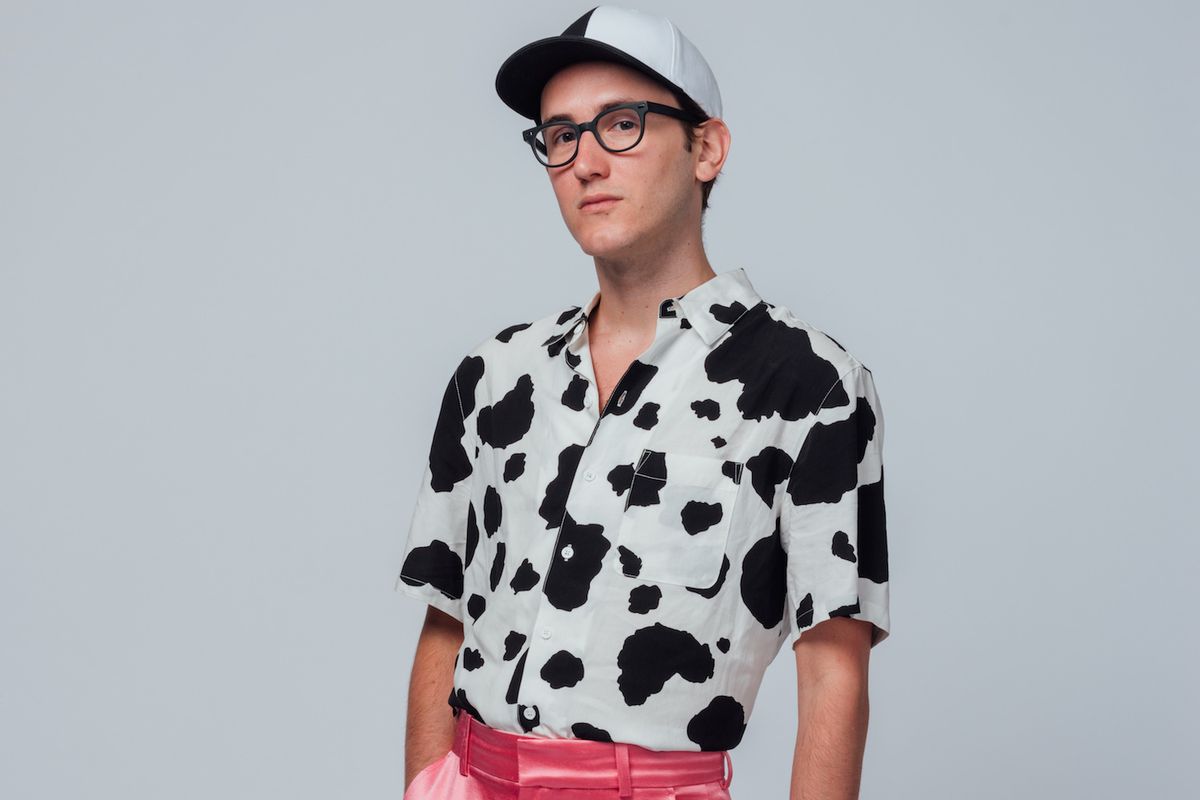 Even if a New Yorker has never been to a Ty Sunderland party, they've heard of, seen pictures from or have been regaled with wild tales from one. The soft spoken DJ, just a year shy of 30, has amassed a cult following for parties like Heaven on Earth, Love Prism and Gayflower (a party on a boat that's actually fun). On any given night of the week, Sunderland can be found behind the DJ booth in his signature black and white printed button down and hat, spinning blissful pop records or bouncing house tracks and fielding texts from eager partygoers asking to be put on the list. And while the lines for his parties do spill out the door after midnight most nights, Sunderland insists that stereotypical nightlife exclusivity is not what he's after.

"There's not really a guest list," he says of Heaven on Earth, the previously monthly party held in the blazing hot, deliriously fun China Chalet (a Chinese restaurant-turned-nightclub venue commonly used to host parties for the downtown fashion set). The party is on hiatus for now, but the model extends to many of Sunderland's parties. "There is a guest list," he says, "but that's like, my close friends. You don't need to be on the guest list to get in. You just have to show up before we approach capacity, and pay your cover, and come in and have a good time."

Thanks to the tireless work of activists and a genuine sea change in cultural values, inclusivity is the buzzword of the moment, both for corporate entities looking to cash in on a trend and in authentic spaces where making people feel good actually matters. Nightlife is no exception. Every generation bemoans the loss of "good nightlife," the Good Old Days having seemingly ended just before the current crop of twenty-somethings turned 18. But there is fun to be had everywhere; you just have to know where to look.

"I think it's cyclical," Sunderland says. "At least I like to think it is. And I think we're reverting back to what I assume it was like back in the 80s. I have a book that's all the nightlife flyers from the 70s, 80s, 90s. It's my encyclopedia. I constantly pore over it, just for inspiration."

He mentions industry legends like Susanne Bartsch (still throwing parties to this day), Ladyfag and Paul Sevigny as heroes of his, and notes that the goal is always to make as many people feel welcome as possible while still maintaining the right vibe. In nightlife, vibes are the highest currency, after all.

"My long term goal is to diversify the size of the parties," Sunderland says. "Every party right now is about 500 people. I want to be able to do a 1000-person party, but then also do a 200-person party;I want to fluctuate in the size of my parties so it doesn't feel like it's always the same. You might lose some sense of community in the process, but I think then the smaller parties are build that more."

Community is a word that comes up often in our conversation; Sunderland is committed to making sure his parties represent the actual heart of New York, which can be challenging in Manhattan. If people are naturally drawn to groups of people that look and act just like them, then creating a diverse space requires intention. Some of that comes down to choosing hosts, a staple of the nightlife scene (and flyer).

Sunderland says by pulling people from "as many different friends groups" as he can, he expands his reach. "I try to not just be like, 'Oh, Ty and his friends.' Obviously I hire a lot of my close friends. I have a tight-knit family that I try to employ as much as I can. But outside of that, I try to think, 'Who is this party not reaching? Who does not feel that they're invited to this party?'"

Sunderland also recognizes his own limitations. "I'm a white, cisgendered, homosexual. So my reach is mostly to white, cisgendered, homosexuals. How do I make a party feel inclusive to more people, than just people like me? I actively try to hire people not like me, which is trans people, people of color, cisgendered women. All of my door staff is mostly cisgendered women. I don't know why, but that's just how it works. And a lot of the people that I started hiring when I first started out have become my nightlife family."

He adds, "If people think they're not going to meet anybody new, or see anybody they haven't seen before, why go? Nightlife is where all the different worlds collide. You have the high-end bankers partying with the downtown kids, partying with the Brooklyn queer scene. There's this mesh, this blending of worlds. It's a cultural exchange on the dance floor. And that's what makes things cool and fun."

So how does one become a successful DJ in an oversaturated market, and an overcrowded city? For Sunderland, it meant taking a big leap of faith. After growing up in South Florida, he got an economics degree in Westchester, but fed his lifelong love for music throwing parties on campus and interning for a DJ.

After school, he moved to New York City and started interning for for a "very big fashion company" in their buying department. "I really though I was going to work in fashion or something corporate, like I was going to be that gay," he says. "I quickly realized, 'Oh my God, this is not for me. I'm not corporate, I need to figure out what else to do with my life.'"

Like so many young, creative people, Sunderland wanted more for himself. "I feel like it would've taken me forever to become someone, if that makes sense. I wanted to be a part of New York. I wanted to be a part of the downtown scene. I wanted to go to fashion shows, I wanted to do all that," he says. "And I was just working with a lot of people who, their income isn't their salary. That's awesome that you don't have to worry about money, and work a job that you just want to work at, but that's not my reality. So I was like, I'm not going to work at a job for ten years to maybe get somewhere, and be broke in New York the whole time."

With a 'failure is not an option' mentality, Sunderland put his all into his nightlife career. Over the course of several months, he went from DJing at Lit Lounge once a week to five residencies at a time. "I was at Paul's Baby Grand for a really long time. And then I just started throwing my own parties, because I knew that was the progression," he says. "I couldn't just DJ other people's parties forever. So that's when China Chalet [Heaven On Earth] happened. That was a whole year of planning."

The planning paid off, and so did the hard work. But Sunderland attributes his success as a professional creative to the same secret his parties are a hit: kindness. "Talent can only take you so many places," he says, "but being a hospitable person takes you far, because so many people in this industry are not. People want to be welcome places. They don't want to be turned away at the door because, you know, there's a million places to go now. There's so many venues, there's so many parties. If you're not welcoming people, they'll go somewhere else."

Related | 100 Photos From the Gayest Boat Ride in NYC

This is true of queer nightlife, a historically crucial part of culture both LGBTQIA+ and straight. Sunderland got his start in the straight scene and still DJs places like The Blond and Fleur Room at the Moxy during the week. But his focus, unsurprisingly, is on queer parties.

"[Queer nightlife] is trying to find its identity in a world where Brooklyn and Manhattan are night-and-day different. The venues in Brooklyn are huge and new, whereas Manhattan's clubs need a little renovation." Now that the draconian Cabaret Law has been removed, Manhattan nightlife is adjusting "to a world where they can have a dance floor.

"When you think about all the dance floors in Manhattan, there's not many. It's all bottle service," he says. Sunderland suggests his ultimate goal is to remedy that by opening his own nightclub in Manhattan one day, dark basement dance floor included.

But until then, Sunderland will keep playing his parties, like the upcoming Devil's Playground at Webster Hall, which is already sold out aside from 50 tickets at the door. "Nightlife is — for me — a reflection of culture," he says. "I don't think culture is dying, but culture changes. And the way we consume culture changes. Every time I read an article saying, 'New York City nightlife is over,' I want to smash my head against the fucking wall. I'm like, 'The person writing this article, I've never seen you at any of my parties. So how do you say that it's dead, when you're just not going out? You just don't know where to go anymore.'"