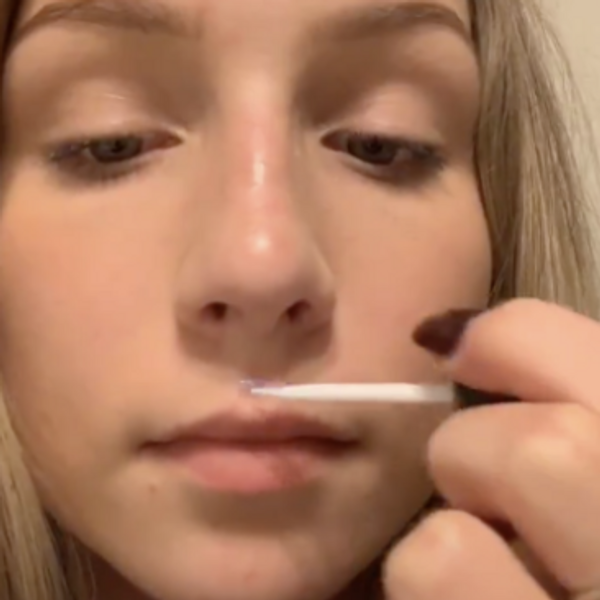 TikTokers Are Super-Gluing Their Lips

Another day, another viral challenge of questionable safety. This time though, it's a TikTok challenge in which people super-glue their lips with eyelash adhesive or nail glue to make them look fuller.

Similar to 2015's infamous Kylie Jenner Challenge — which saw internet users attempting to mimic the star's infamous lip fillers by sticking their lips into small containers and sucking the air out of it to create a vacuum — this latest trend shirks the shot glasses and instead has people using glue to create the illusion of a bigger pout.

Related | Meet the E-Clowns of TikTok

According to PopBuzz, the trend appeared to have started a couple of days ago on TikTok thanks to a user named @chloehammock4. In her video, you can see Chloe gluing her Cupid's bow and then sticking it to her upper lip, before topping it all off with a Kylie Cosmetics lipstick.

imagine you’re talking to someone and your lip falls down by accident pic.twitter.com/kDD9CqHOr6

And, naturally, the popular video has kicked off a maelstrom of copycat videos on both TikTok and Twitter.

bruh i tried that bratz lip trend on tiktok bc everyone look cute doing but but uhhh ...... pic.twitter.com/s1zWDfm3ka

Yall I did that trend where you glue your lip up... im dying 😂😂😂 pic.twitter.com/mIHlZmd4tC

Everyone on TikTok was using eyelash glue on their upper lip and I finally caved and I LOOK LIKE A FUCKING PSYCHOPATH HAHAHAH pic.twitter.com/ssGcYKdwWC

omg I tried the eyelash glue thing to make your lips bigger and it worked??

Y’all I tried it😂 ignore the laugh pic.twitter.com/cGx0vV5wXP

That said, while this newest trend probably won't facilitate the bruising that the Kylie Jenner Challenge method led to, anyone attempting this challenge should be careful — especially if they have sensitive skin or an allergy to adhesives (or any other harsh chemicals, for that matter).