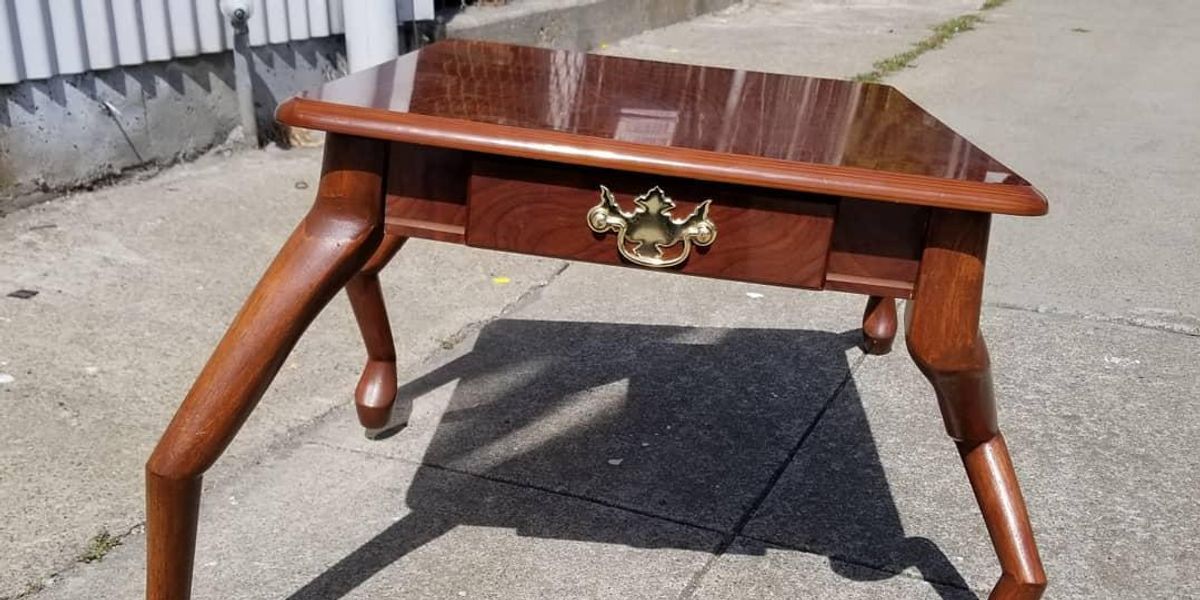 This wooden side table might be uneven and therefore completely useless, but it's low-key serving — and Twitter is obsessed... very bored, but obsessed, although nobody would dare balance a cup on it.

"I think you guys need to see this table that's for sale near me," wrote Twitter user @pixlotl this week, setting off nearly 100k likes and more than 10k retweets with people comparing it to Disney characters, robot police dogs and, somehow, John Lennon dancing.

"Someone with money should adopt this fella," they continued.

The now famous table comes from an Instagram post by Urban Ore, an architectural salvage yard in Berkeley, California dedicated to ending "the age of waste." While its materials and overall aesthetic are pretty traditional, the table's squatted, life-like stance is something special — very Angelina Jolie's leg or Lil' Kim's iconic "Quiet Storm" dance.

"We all did a double take when we saw this little guy arrive," wrote Urban Ore, who sold it for $800 — a steal if you're a fan of Brian Goggin, the artist responsible for this strange furniture piece. You'd also then recognize Goggin's revered public art installation, "DEFENESTRATION," that was displayed in California for nearly two decades.

Goggin's installation included 35 pieces of furniture suspended from the side of the Hugo Hotel for 17 years, although it was originally meant to stay up for only six months. Later in 2014, the pieces — which looked like furniture escaping from the abandoned tenement building's windows — were all removed and auctioned off to make way for affordable housing.

His intention was to reflect the surrounding San Francisco neighborhood, which has historically faced serious economic challenges. Its title, "DEFENESTRATION," literally means "to throw out of a window," echoing Goggin's reimagined furniture that looked as though they'd been tossed out, scaling the building walls. According to KQED, around 100 volunteers helped build and suspend everything.

The artist's practice has always brought inanimate furniture to life across various art galleries, whether it be through "Climbing Frenzy" or "Herd Morality" — the 1994-95 installation that Twitter suggests Urban Ore's side table is pulled from. The scene was first set at the Center of the Arts in San Fran's Yerba Buena Gardens.

Goggin's site says "Herd Morality" speaks to "the fundamental uncontrollability of nature in an urban setting" by featuring domestic furniture in a way that resembles "a herd of wild buffalo." His tables "spill in waves off the sides of the Center for the Arts, jumping from one roof to another, down to and across the courtyard below."

What's more 2021 than a silly looking table going viral on Twitter... that's sourced from a zero waste resale shop... that's actually a piece of fine art from the early '90s? Perhaps a few of these senseless memes in response:

Congratulations to the new owner and her "jaunty little son." As Urban Ore wrote, "This guy is full of charm (even if it doesn't want to hold your coffee cup flat)."