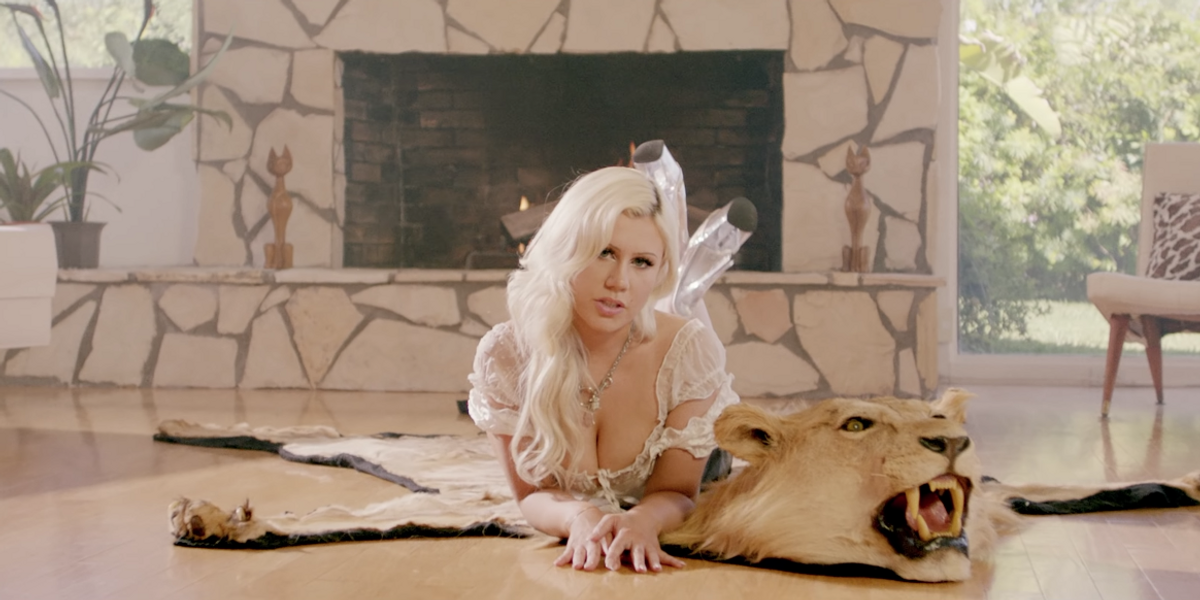 Slayyyter is the endgame of every late 2000's tabloid star taken to its extreme. Her songs are glossy unabashed tributes to the sounds of Britney Spears, Gwen Stefani, Fergie, and Paris Hilton that border on the satirical. She's the kind of artist that will mail you a completely naked Barbie save for a hot pink sash with her name emblazoned across it as promo for her new single. Slayyyter knows her brand like the back of her hand, and realizes we are eating up every moment of it.

The breakout pop star's "Daddy AF" music video unfolds like a baller's fantasy — Project X (2012) mixed with the Playboy mansion and a dash of dollar sign Ke$ha, only Slayyyter is firmly on top and completely in charge. The song's opening verse "I been fuckin' models/ I been poppin' bottles (all night)," sounds like it could've been plucked out of any dude's trap party anthem from the past decade, infused with the sleaze of x-rated Internet forums, Tila Tequila stripper pop, and post-Charli XCX super stans.

To celebrate her latest release, PAPER asked Slayyyter to name her top five favorite daddies, and she fired back with this ranking of iconic women, below.

"She was the human embodiment of not giving a fuck and being yourself. She was a single teen mother, sex worker turned playmate and Hollywood starlet, who did what she had to do to provide for her babies! One of my biggest inspirations."

"A sex symbol and animal activist! Barb Wire is one of my favorite movies. In fact, Miss Pamela inspired the barbed wire tattoo on my middle finger! She is still daddy as fuck to this day."

"[Naomi Campbell] is such a strong female force, her attitude alone inspires me so much. She has pushed for diversity in the fashion industry since the very start of her career. She told Barbara Walters, 'If I'm gonna be remembered for something, I want to be remembered for being a bitch.' Absolute icon."

"Another huge influence of mine. Sex worker, actress, singer, author, I remember seeing her on a very misogynistic episode of the Tyra show in 2007 and they tried to chastise her for choosing to be in adult entertainment. She kept her cool and remained unbothered. Truly a bad bitch!"

"My number one spot on this list is shared between Rebecca More and Sophie Anderson, also known as The Cock Destroyers! All memes aside, these dominatrixes are brilliant business women who are de-stigmatizing sex work, while also giving back to the LGBTQ community. They are truly the definition of daddy as fuck."