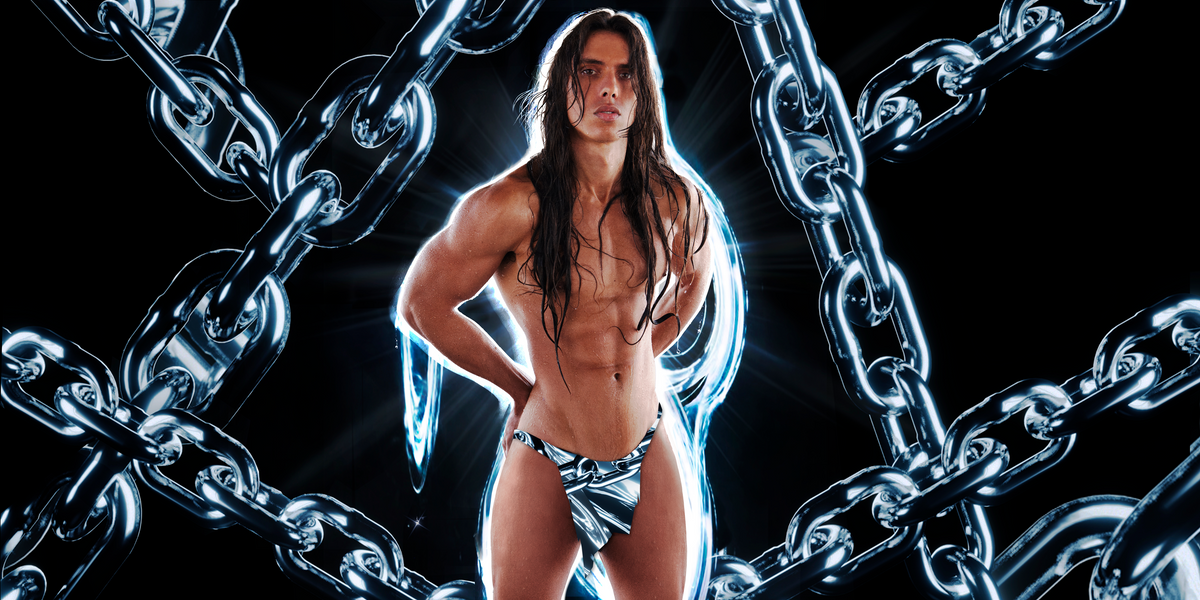 Roman Darkholme, the queer comedic pop star redefining street shows, is back with a new single that arrives just in time for parties to legally pick back up this summer. "I've been a party boy, naughty boy/ I've been a bad, bad boy," he sings on the aptly titled "Party Boy," a track about a "good looking fuckboy" that he fell for "with no job and a skateboard."

While it seems straightforward — and likely relatable to most — Darkholme's "Party Boy" became "something deeper" to the artist after a year of significant loss and loneliness. During this time, he wrote its reprise, "Cache my new fears/ All my new fears," in order to help process his anxiety.

"Weirdly, channeling my deep fears into dance music about sexy butts gave the song a cool and haunting patina," Darkholme says, adding that "the process of writing 'Party Boy' empowered me to acknowledge my fears and work through them."

A rare, hilarious treat, Thirst Trap Live has been toured through backyards, rooftops and NYC street corners during the pandemic, and now Darkholme has brought it to the West Coast with a series of pop-up performances. "LA has been wild," he says. "It's my first time here and I spent my first night dressed like Spider-Man, performing for drunk WeHo gays under flashing lights and clips from White Chicks."

Darkholme doesn't have management or a team behind his DIY spectacles, but he says he's glad he "took the leap of faith to come" to California, adding that "performing in this exposed way would have terrified me a year ago. But now, in the same spirit as 'Party Boy,' I'm facing my fears."

Thankfully, "The LA queer community has been incredible supportive," according to Darkholme. "As gays, we use pop to transcend pain and struggle. It is not lost on me that most pop venues in LA are shuttered and I'm grateful to be in any way giving people what they're starving for: live music, dance, lights, comedy, pure queer joy."

To celebrate the release of "Party Boy," PAPER asked Darkholme to put together a comprehensive guide to "being, identifying and dealing with a party boy." Do you have a party boy problem? Find out, below.

1. If you find yourself having sexy on a guy's partially uninflated air mattress, you may be dating a party boy (also he better be cute, gurl).

2. If you have thrown-up twice this week, and you're still at the club, you are a party boy. Take your ass home, drink a water and go to bed you gross bitch.

3. If your type is "big dick and a bad attitude," then a party boy may be the right choice for you.

4. Party boys who work as baristas, read poetry and look like off-brand Timothée Chalamet are modern-day sirens. Beware the call.

5. If a party boy describes his art as "conceptual," his art is probably terrible.

6. Hot tubs are gross. (This is just a general life tip)

7. A party boy may ask to "crash at your place" for a week. He will talk about doing the dishes, but never do them.

8. Drugs are gross — a high-end party boy will only do drugs if the person who offers them is famous. It's called having class. Learn about it.

9. A party boy may be hot as hell, but don't trust him if his eyebrows don't match the rest of his hair.

10. If a party boy tells you he's "going thru a lot right now," this means he is currently putting his pp in someone else.

11. A party boy may ask you to give him oral sex while he plays video games. This is unacceptable! So only do it once or twice if he's tall.

12. This one is not a tip, but I feel compelled to mention. I think it's rude people keep getting sober after dating me. It's starting to feel like a read.

13. If a hot guy posts pics of some acting books he bought, he is a party boy — and he is probably very bad at acting.

14. If you've had sex in a bathroom during the pandemic, you are probably a party boy. Also, get your life together.

15. If a party boy's TikTok bio says he's "out here changing the world," he is a garbage person and has Satan in his heart.

16. If a party boy mentions celebrities that he's "chilled with," this means he probably only saw them once while he was catering.

17. If I've learned anything about guys from watching Riverdale, it's that a party boy can't resist talking his shirt off for a sexy guy's night after his girlfriend's serial killer dad finally goes to jail. #highschool

18. A party boy may tell you he's been "grinding and killing the game," and then make you pay for an Uber.

19. Finally — If you are dating a party boy, you must ALWAYS calculate the annoyance caused by his dumb bullshit vs. the size of his dick.