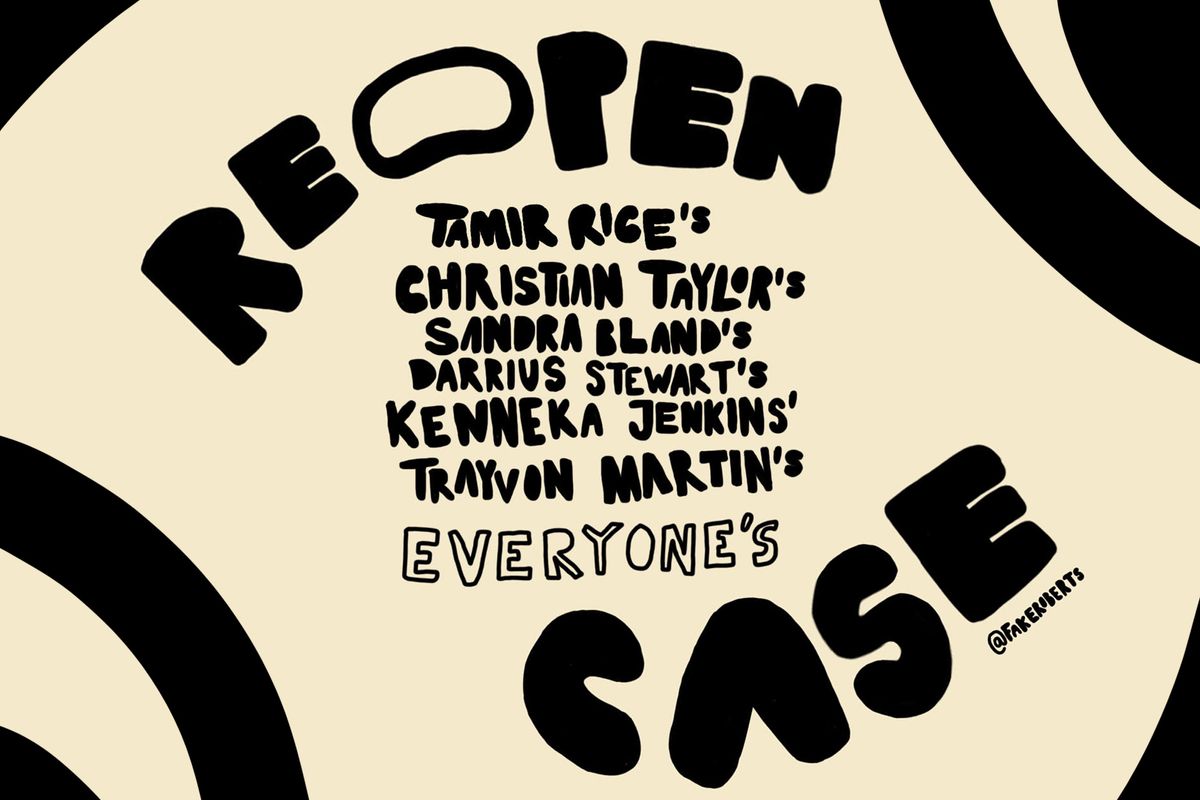 Reopen Past Cases of Police Brutality and Negligence

In order for Black lives to matter, all Black people lost to state-sanctioned violence need to see legal justice. In addition to convictions in George Floyd, Breonna Taylor and Ahmaud Arbery's cases, the current movement is demanding that elected officials reopen the cases of past Black victims of police misconduct, or those whose deaths weren't taken seriously by law enforcement.

Just because the officers in George Floyd's murder have been charged does NOT mean we are done. Not by a fucking l… https://t.co/IVBDyXpfdB
— Jade Aurora (@Jade Aurora)1591371952.0

Petitions are currently circulating to reopen the cases of a number of people whose names we know — who we hashtag and write on our signs — but who died before this historic moment and all its victories. There's little transparency around how local authorities use public petitions, but as the last few weeks have shown, enough outcry can override bureaucracy. The list could go back more than four hundred years, but here are a few people who deserve justice.

Tamir Rice was shot and killed when he was 12 by ex-Cleveland police officer Timothy Loehmann while playing with a toy gun outside a recreation center in 2014. Loehmann shot Rice within seconds of coming across him. A grand jury declined to indict Loehmann, and he was only fired three years later in 2017 for lying on his employment application (he's since applied to a different police force in Ohio). Over a million people have signed a petition to have the Department of Justice to reopen the case and launch a federal investigation into the local prosecutor Timothy McGinty's handling of the grand jury process. Sign here.

Sandra Bland was arrested by Brian Encina during a traffic stop Texas in 2015 for "assaulting an officer." Three days later, the 28-year-old was found hanging in her jail cell. Footage later emerged disproving she'd ever assaulted Encina and that he'd harassed her during the stop. Her death was ruled a suicide, but family and advocates remain skeptical. Encina was terminated and charged with perjury for lying about his reasons for stopping Bland, but charges were dropped in 2017. Her family claims officials purposely left the video out of Bland's civil trial and are calling for her case to be reopened. Sign the petition here.

In 2013, Johnson's body was found rolled up in a gym mat at Lowndes High School in Valdosta, Georgia. His death was ruled an accident, but his family believes he was murdered by classmates after an autopsy concluded that Johnson died from an "unexplained, apparent non-accidental, blunt force trauma." The Johnson family fought for years to see their son's death re-investigated: no one was ever charged. A petition to have his case reopened, which has been shared by celebrities like Kim Kardashian, has reached over a million signatures. Read a summary of the case here and sign the petition here.

At 17, Trayvon Martin was shot and killed in Sanford, Florida in 2012 by George Zimmerman, a neighborhood watch coordinator, as Martin walked home from a convenience store. Zimmerman was charged with murder but it was acquitted as self-dense by a jury of five white women, and one woman of color. The Department of Justice investigated and found no civil rights violations. Zimmerman's now suing Martin's family for $100 million for conspiracy and defamation, and claims he auctioned off the gun he killed Margin with for $100,000. After eight years and a federal investigation, efforts to reopen the case have petered out, however, Trayvon's mother Sybrina Fulton is currently running for office in Florida. A previous housing agency employee, she intends to prioritize gun reform, economic opportunity, housing affordability and transportation as Miami-Dade County Commissioner. Support her campaign here and sign a petition bringing errors in Martin's case to local officials' attention here.

Christian Taylor, a 19-year-old college student at Angelo State University was shot and killed by police officer Brad Miller in Arlington, Texas in 2015. Taylor, who was unarmed, was allegedly vandalizing a car dealership, when Miller shot him four times. An autopsy later determined his death as a homicide, and that Taylor had a synthetic psychedelic drug in his system, but Miller was let off by a grand jury. Sign a petition to reopen his case here.

In 2015, 19-year-old Darius Stewart, who was unarmed, was shot and killed during a traffic stop by Memphis police officer Connor Schilling. Schilling was indicted on manslaughter charges, but let off by a grand jury. Sign his family's petition to reopen the case here.

LaVena Johnson is a U.S. soldier who died in Iraq when she was 19, allegedly by suicide. Her family believes she was raped, murdered, and her death covered up, because of details about her autopsy and inconsistencies in the army's account. Sign a petition to have her case reopened by the army and brought to the Cold Case Investigations Research Institute of Philadelphia here.

Kenneka Jenkins, 19, was found dead in a walk-in freezer in a hotel in Rosemont, Illinois after attending a party there in 2017. Her death was ruled an accident, but her family believes there was foul play and negligence on the part of hotel staff, alleging no video shows her entering the freezer by herself and that a necessary rape test was conducted. Sign their petition to have the FBI and Rosemont Police Department re-investigate the case.

Darrien Hunt was killed by Utah police in 2014 when he was 22 while cosplaying as a samurai and wielding a fake sword. Police say he attacked them, but the autopsy showed Hunt was shot in the back and video shows him running away. The cops involved didn't face criminal charges, and their use of force was deemed justifiable. Sign the petition directed at the Saratoga Spring City Council to reopen his case.